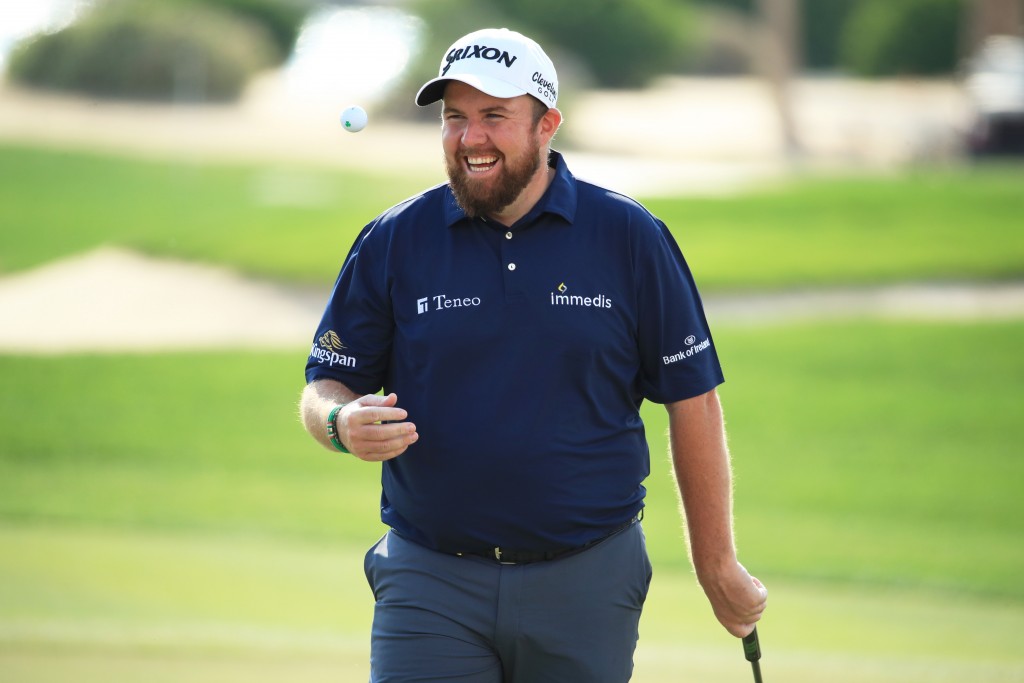 Defending Abu Dhabi HSBC champion Shane Lowry would love to represent Ireland at the 2020 Olympics and playi in his first Ryder Cup at Whistling Straits. Picture by GETTY IMAGES

IT’S onwards and upwards for Shane Lowry as he begins his title defence at the Abu Dhabi HSBC Championship – with one eye on the Olympics and the other on the Ryder Cup.

The Irishman won his first Rolex Series title at Abu Dhabi Golf Club 12 months ago – and carried his form and confidence through to the summer in what became a stellar season after winning the Claret Jug as The Open returned to Northern Ireland for the first time in 68 years.

With a Ryder Cup and the Olympics to come in 2020, there could be more firsts for Lowry.

Lowry said: “It was obviously my best year-to-date. I couldn’t really have envisaged what happened.

“It was really nice to get off to an unbelievable start here, winning one of the biggest events on Tour.

“This course, this tournament, against this field every year is a really, really difficult tournament to win, and it obviously kick-started an unbelievable season.

“I think that can only give you confidence going forward,” added Lowry.

“Like anybody in this game, anybody who plays this game, knows that a lot of it is built on confidence.

“A lot of form is built on confidence, and that’s what I gained from here last year.

“Obviously I have goals in my head. I have it in my head what I want to achieve this year, and the main thing for me is make that Ryder Cup team. I’ve set everything out to do that.

“The Olympics is going to be exciting. I’ve never played, so hopefully I can go there this year.

“We don’t win too many Gold Medals in Ireland, so if you’re able to bring one back, I think that would be very, very special.”

And once again it all begins with the Rolex Series in Abu Dhabi, where Lowry is aiming to emulate Tommy Fleetwood – the last man to win the title in consecutive seasons.

The Lancastrian’s victory in 2017 proved to be the springboard that led to him winning the Race to Dubai later that year – and his 2018 win in Abu Dhabi preceded his momentous Ryder Cup debut at Le Golf National.

Fleetwood said: “As an event, it is pretty much the best way to start the year. I’ve always enjoyed it. It throws you in at the deep end, a really tough test.

“I’ve been lucky enough to have a couple of really good years here, in particular the ones that I did win here, catapulted me on for the rest of the year.

“People like to set goals for the year. Of course, there’s targets to do with results, the obvious ones are to win tournaments or to win Majors – or to compete in Majors – and of course they are there.

“There’s other things I’d like to do. Of course I want to get to the Olympics,” said Fleetwood, who represented Great Britain and Ireland in the Walker Cup in 2009, and played for England in the Home Internationals during his amateur career.

Of course, Hampshire’s Justin Rose claimed Gold at the 2016 Olympics in Rio, when many of the world’s top players elected not to travel to Brazil over fears about the Zika virus.

It marked golfs return to the Olympics for the first time since 1904 and Tiger Woods has expressed winning Gold in golf is very high on his list to go with his aim of winning 19 Majors and breaking Jack Nicklaus’ record.

Fleetwood will settle first for a place in the England team travelling to Tokyo this summer and the chance to take part in the opening ceremony.

“I think that’s on my radar,” said the Southport pro who ended 2019 on a high by winning the Nedbank Golf at Sun City – his first win in nearly two years.

“The Ryder Cup is in September. And then, just clear signs of improvement. There are certain parts of my game that I want to improve.”

Garcia never out of top 20 in Abu Dhabi

FLEETWOOD’S Ryder Cup teammate Sergio Garcia is vying for first wins on both the Rolex Series and in Abu Dhabi, as he returns to this part of the United Arab Emirates for the first time since 2014.

The Spaniard has never finished outside of the top 20 in his six previous appearances at Abu Dhabi Golf Club.

And Sergio knows the benefit of early season success in the desert, going on to win the Masters Tournament after his victory in the Omega Dubai Desert Classic in 2017.

Garcia, who has ended his two-year association with Callaway this month, said: “I’ve been practising hard and I’m excited for it.

“It’s a very good tournament to start the year with, and a nice run of tournaments the next couple of weeks,” added Sergio, who is expected to play without an equipment deal, at least in the early part of 2020.

“Hopefully we can see some good results on all the hard work we’ve been putting in and have a good year – because it’s a big year and we’re obviously looking forward to it.”

Garcia faces a battle with John Rahm to represent Spain in the Olympics in Japan, at the end of July.

The 40-year-old would need to be in the world’s top 15 by June 22, to guarantee a start alongside Rahm, the world No. 3 and leading Spaniard.

Sergio said: “Winning in January is just positive. Any time you can start the year like that, it’s great.

“It gives you a lot of confidence. It kind of takes a little bit of pressure off knowing that you’ve already got a win.” 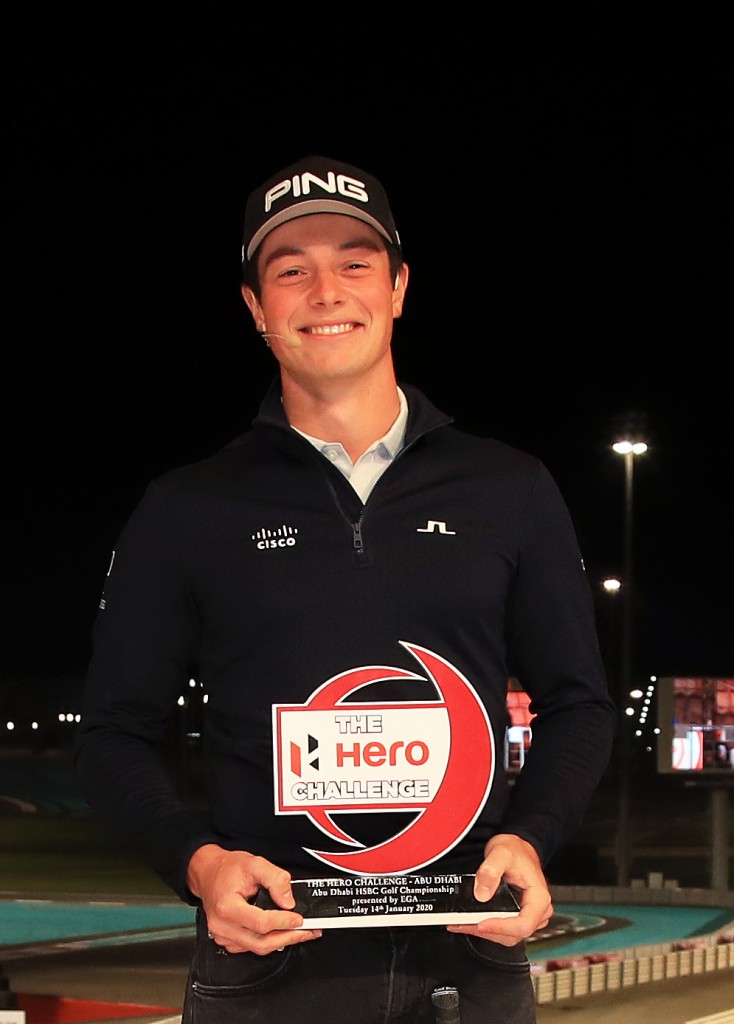 Hero Challenge winner Viktor Hovland at Yas Marina Circuit in the build up to his debut in the Abu Dhabi HSBC Championship on the Falcon Course. Picture by GETTY IMAGES

RISING star Viktor Hovland got his week in the UAE off to a great start with victory in the Hero Challenge, at Yas Marina Circuit on Tuesday.

The 22-year-old PGA Tour player has an easier route to the Olympics – providing he can finish inside the leading 60 men who will qualify.

The former US Amateur Champion is another man who also has the Ryder Cup on his radar, as the Norwegian joins the stellar field in Abu Dhabi playing on a sponsor’s invite.

Hovland, an Oklahoma State University graduate, will be aiming to convert his impressive amateur achievements into his first professional victory in the first Rolex Series event of the 2020 Race to Dubai.

Hovland, who beat Louis Oosthuizen with a bullseye in the Hero Challenge under the lights on Tuesday, said: “Playing in big events excites me… but I just try to do as well as I can.

“Fortunately, those bigger events usually they tighten up the fairways and the rough is a little thicker.

“I just think that suits my game, and that’s probably why I’ve performed a little better at those events.

“Obviously I want to do what I can to make the team for the Ryder Cup.

“That’s not what I’m thinking about every day when I wake up, I’m just trying to get better at golf.

“But I want to be eligible if that opportunity comes,” added Hovland, who was the low amateur at both The Masters and US Open in 2019, beating Jack Nicklaus’ record for the lowest round in the USGA event.

His four-under total of 280 broke the Golden Bear’s record total set in the 1960 US Open, at Cherry Hills, by two shots.

Hovland will play alongside Sweden’s former European No. 1 Robert Karlsson and Adrian Meronk, the first Polish player to earn a European Tour card.