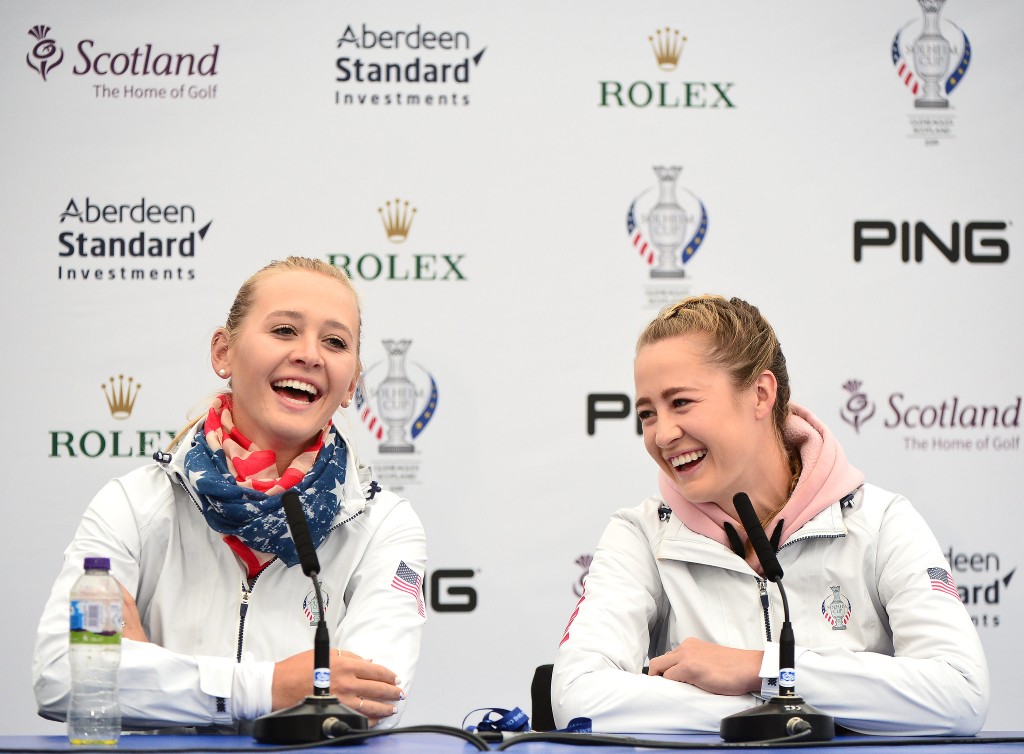 American Jessica and Nelly Korda (right) will become the first sisters to play together in a foursomes match whenthe Solheim Cup gets underway at Gleneagles on Friday morning. Picture by TRISTAN JONES

SISTERS Jessica and Nelly Korda will create a slice of Solheim Cup history when they play together in the Friday Foursomes over the PGA Centenary course at Gleneagles.

Annika and Charlotta Sorenstam were the first sisters to be named together on a Solheim Cup team in 1998 – but they did not play alongside each other in either the foursomes or fourballs.

So the American sister will be breaking new ground at 8.34am when they set off in the third foursomes match against Germany’s Caroline Masson and Yorkshire’s LPGA winner Jodi Ewart-Shadoff.

The honour of hitting the first shot will go to America’s Morgan Pressel, who plays alongside Marina Alex in the first foursome at 8.10am, against Spain’s Carlota Ciganda and Yorkshire’s Bronte Law.

Dorset’s Georgia Hall and Celine Boutier make up the second European pairing at 8.22am against Lexi Thompson and Brittany Altomare, while the last match on the course at 8.46am will feature Woburn’s Charley Hull and Spaniard Azahara Munoz against Meghan Kang and Annie Park.

US captain Juli Inkster admitted the Korda sisters had requested to play together.

“You know, they actually asked me,” Inkster said. “I wasn’t too keen on it. I don’t know. But the more I thought about it, I thought it would be stupid not to play them.

“I mean, it is not often you get two sisters on one team. They should have the right to play together.

“And Jessica said, ‘why don’t you see how we play in the Dow together, if we kill each other then maybe not put us together’. So that was our kind of thinking.”

European captain Catriona Matthew decided to put rookie Bronte Law out in the first group because she has been champing at the bit to get started ever since the start of the week.

“That was my kind of reason for putting her out early and Celine Boutier in the second group. I just felt the longer they have to hang around and wait, they more nervous they were going to get.

“It’s obviously important to get off to a good start,” the Scot, who has played in nine Solheim Cups, added.

“Being the home side, I think to get off to a good start would really get the crowd into it. So, I think for us, we’re really going to go out there and try and get the crowd in and get some blue on the board early on.

“We actually didn’t ponder the parings too much,” said Matthew.

“We have a couple of ones out there for the afternoon that just kind of fitted nicely, and those were the ones we wanted, to hopefully try and play everyone the first day.

“So, they were just kind of natural pairings, to be honest.”