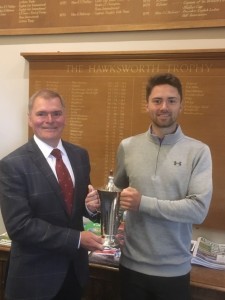 Phil Tomkinson from Otley Golf Club tasted success again when winning the prestigious Hawksworth Trophy, a 36-hole stroke play competition for leading amateur golfers from across the north of England, 5 years after his previous win.

A high-quality field of players faced challenging conditions with firm fairways, coupled with a strengthening westerly wind and scattered showers. Despite that the leading players scored well. Having reached the turn in 30, Phil briefly threatened the course record before carding an excellent 66 in the morning to set the target. Adding an afternoon a 72 for a 138-total proved enough for a 3-shot victory over runner-up Dan Thomas (Shipley GC) on 141 and Tom Hunt (Meltham GC) in third on 143. George Heath and Chris Green, both on 145, made up the top 5.

The winner’s scores was particularly notable in trying playing conditions which saw the competition scratch scores for the 1st round rise to 72 (SSS 71) and the 2nd round stay the same.

The morning gross prize was won by Ben Rhodes (Woodhall Hills GC) with a 69, while the afternoon gross prize went to Nigel Colbeck (Cleckheaton GC) also with a 69.