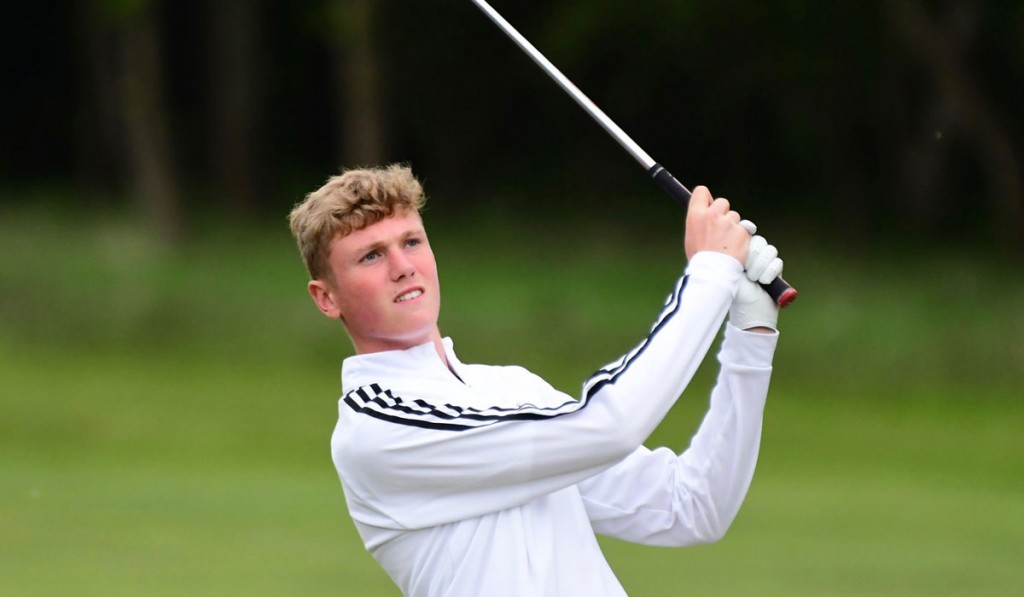 Ben Schmidt equalled the course record with a superb 64 in the second round of the Brabazon Trophy, at Alwoodley GC. Picture by LEADERBOARD PHOTOGRAPHY

YORKSHIRE teenager Ben Schmidt led the international field in the Brabazon Trophy by three after shooting a record-equalling 64 at Alwoodley Golf Club, in Leeds, on Friday.

The 16-year-old, from Rotherham Golf Club – where Masters winner Danny Willett played as a junior – was nine-under after 36 holes of the English Men’s Open Amateur Strokeplay Championship.

Meanwhile, Sussex’s first round leader Charlie Strickland scrambled his way to a 70 and stayed well in touch in second place. A further shot back and sharing third place on five-under were Castle Royle’s David Langley and Wales’ Jake Hapgood.

Schmidt’s bogey free round of seven-under was his lowest score in competition and started with three consecutive birdies, which were followed by two more before the turn.

Ben said: “It all came together, right from the first tee shot. Then it was just about not making mistakes on the back nine. I hit good tee shots and iron shots, kept the ball in play and holed a few putts when you don’t expect it. That’s when you get a good score.”

And as for leading the Brabazon on his first appearance in the championship?

“It’s nice,” said Schmidt, a member of the England Boys squad. “But I’ve got to go away and try not to think about it. My first goal was to make the cut, because this is a big men’s event, and I’ve done that quite easily, which is good.

“Now I’ve got the weekend and two more rounds, so I’ve got to restart, not think about leading, but just do what I’ve been doing for the past two days and play good golf.”

Willett, who spent two years at Jacksonville State University, in Alabama, won the English Amateur in 2007, beating Matthew Cryer at Royal St George’s on his way to becoming No. 1 in the World Amateur Golf Rankings.

No doubt comparisons will be drawn with Schmidt’s progress if he can maintain his position at the top of the leaderboard.

Willett played in the 2007 Walker Cup alongside Rory McIlroy at Royal County Down and the R&A selectors will be watching Schmidt’s progress with Great Britain and Ireland facing the Americans at Royal Hoylake, in September.

On Saturday, Schmidt will be paired with Strickland who added one under 70 to his opening 66.

“Scrappy was the word,” said the Ham Manor golfer who already has a big win under his belt after claiming the Selborne Salver in a play-off at Blackmoor GC in April, and was on the shortlist to play in the 2017 Walker Cup in Los Angeles after beating Min Woo Lee at Royal St George’s in the British Amateur two years ago.

“My short game saved me all day. But I’m in a good spot and I would have taken one or two under before I went out, so I’m pleased with it.”

Langley, the B.B.&O. No. 1, who has been looking to kick on after spending the early part of the season with the England squad in South Africa, raced into a share of third place after covering the first 10 holes in seven-under.

The Old Domininion University graduate started birdie, eagle, dropped a shot on the fourth, and then had five consecutive birdies. The rest of the back nine proved tougher, but the 23-year-old eventually signed for four-under 67 – and put himself right in contention.

Langley, who led qualifying for the South African Amateur Championship in 2018, said: “It was a good day’s work.”

Jake Hapgood was also on the birdie train, with four in a row from the fifth thanks to good mid and long-range putts. He reached the turn in three under and parred home to hold on.

Hapgood said: “On the back nine my short game saved me, there was a lot of scrambling. But I finished strongly and when you make pars on all those holes it’s a bit of a bonus.”

Scotland’s Jamie Stewart was another player who flew round the front nine, reaching the turn in seven-under 29 with the help of two eagles. Once again the back nine proved testing in the wind, but he completed his round in 65, which propelled him 32 places up the leaderboard.

“It was a good round and it was nice to find a little bit of form because I’ve been struggling the last few weeks,” said Stewart, who was runner-up in the 2018 Scottish Amateur.

He shares fifth place with Yorkshire’s Charlie Thornton (Fulford), who added 67 to his opening 71.

After the second round the field has been cut to the leading 60 players and ties. A total of 64 will return to play the final 36 holes over the weekend.