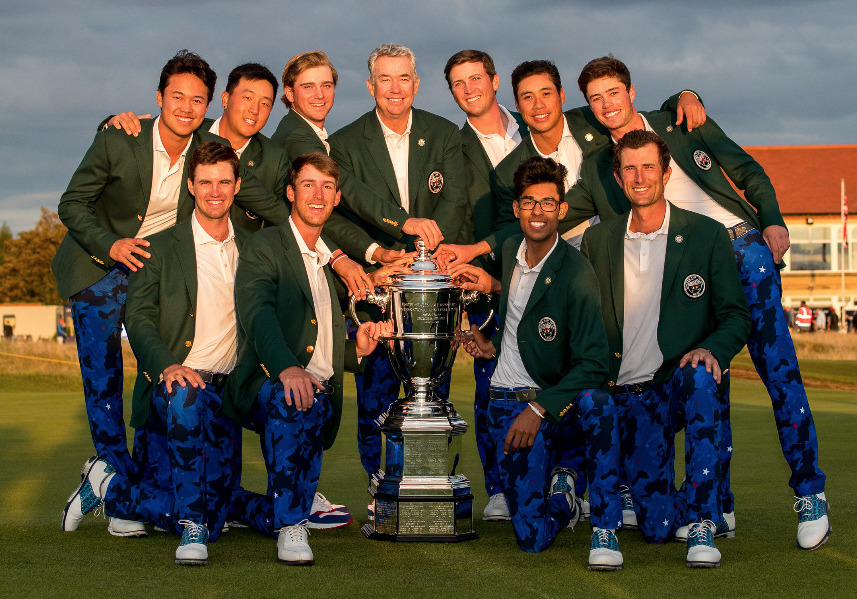 The USA team’s five-point victory against Great Britain and Ireland at Hoylake was the biggest away win since Sunningdale in 1987. Picture by USGA

THE USA Team rebounded from a 7-5 overnight deficit, winning 10½ out of a possible 14 points to capture the 47th Walker Cup Match over Great Britain & Ireland at Royal Liverpool Golf Club, on Sunday.

It was the first USA victory on GB&I soil since 2007 at Royal County Down when a team containing Rory McIlroy, Danny Willett and David Horsey lost 111/2-121/2 to an American team featuring Dustin Johnson, Ricky Fowler and Webb Simpson.

The USA retained the trophy after their 19-7 win at Los Angeles Country Club two years ago and now leads the overall series 37-9 with just one match tied.

While the USA team performed well during the morning foursomes matches, securing two-and-a-half points to trim the GB&I lead to just one point with 10 singles matches to come.

And it was the afternoon singles that truly made the difference, as the visitors won eight out of 10 – equalling their singles performance in the final sesssion two years ago.

Any thoughts of a nail-biting finish to men’s amateur golf’s most prestigious team competition were banished in just four hours. 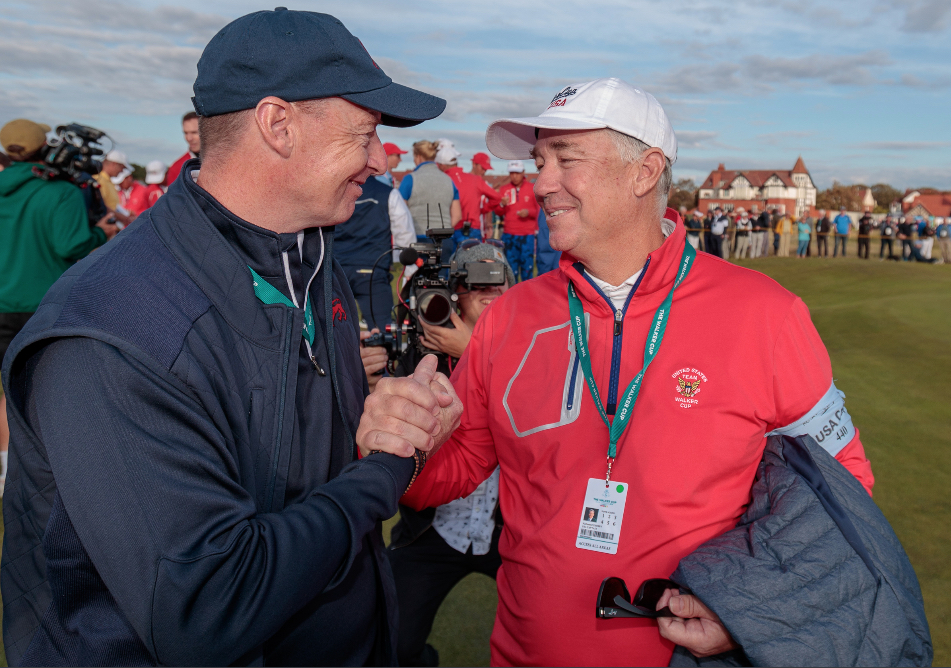 Winning USA captain Nathaniel Crosby, who played at Hoylake when the Americans last won at Royal Liverpool in 1983, said proudly: “The singles were amazing The guys played great.”

John Augenstein, who was runner up in last month’s US Amateur at Pinehurst, hit the opening tee shot of the competition on Saturday morning – and then secured the winning point beating Somerset’s Thomas Plumb, 4&3.

“I did not know that my match this afternoon was the clinching point,” said Augenstein. “I mean, it really doesn’t matter who clinches it.

“The fact is that we’re a team and we won the Walker Cup for each other and for the United States.”

Team-mate John Pak was the only player not lose a match, wining his one foursomes and two singles matches.

The Florida State junior – who played for the Seminoles alongside Hampshire’s Harry Ellis the 2017 Amateur Champion – picked up crucial points on both days.

He came back from a late deficit against Ireland 2019 Amateur Champion James Sugrue, winning the last two holes to defeat the Mallow man by one-hole, despite the efforts of a large contingent from the Irish club cheering on their man very loudly on Saturday afternoon.

“Yesterday afternoon with John Pak, that was a really pivotal match,” added Crosby, who was the sixth son of legendary crooner and golf fan Bing Crosby. “I think that really made a big difference in our psychology.

“We could have been two points or even worse down going into today. These guys are inseparable. They’ve got a great memory now.”

Other notable performance from the USA team included Brandon Wu and Alex Smalley, each of whom played in all four sessions and earned three points, with the latter beating Ireland’s Caolin Rafferty 2&1 in the third match. 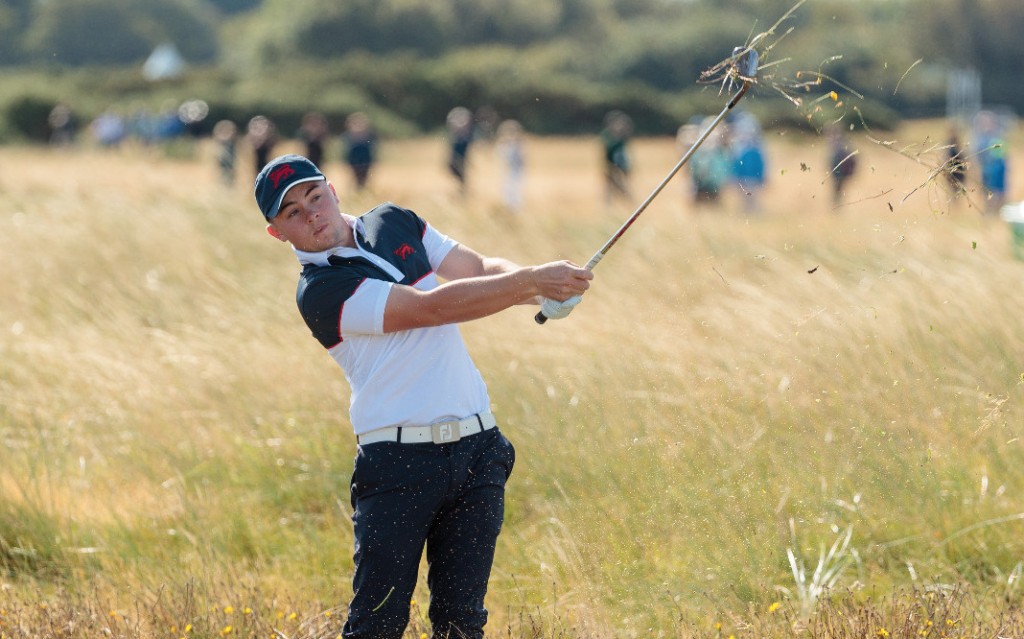 Yorkshire’s Alex Fitzpatrick lost the 18th to Isaiah Salinder to go down by two holes in the top singles match. Picture by USGA

Hallamshire’s Alex Fitzpatrick – who was cheered on by his Ryder Cup brother Matt – had just lost to by two holes to Isaiah Salinder at the top of the order.

Mid-amateur Stewart Hagestad – the only player on either side who played two years ago – had a sparkling final day, winning two matches.

He and foursomes partner Akshay Bhatia – the youngest player in USA Walker Cup history – bounced back from their foursomes defeat against West Cornwall’s Harry Hall and Conor Gough, on Saturday.

They exacted revenge in the rematch with a 3&2 victory in Sunday’s foursomes. Hagestad and Bhatia won their singles matches in convincing fashion, 5&3, and 4&2 – against James Sugrue and Hall – respectively.

“Obviously the boys are disappointed,” said GB&I captain Craig Watson, who played alongside Hampshire’s Justin Rose, in another heavy defeat for the Home Nations in the 1997 Walker Cup on US soil.

“It didn’t go quite to plan but they can be proud of their achievements to get in the team first of all and of their performance this weekend. I’m proud of all of them,” Watson added.

Sandy Scott claimed GB&I’s first point of the afternoon after an impressive 4&3 win over Wu.

The 21-year-old from Nairn went five up before the turn, only to lose the next three holes to the American from the ninth.

Scott bounced back with birdies on the 12th and 14th to go four up – and closed out the match when the 15th hole was halved in par. 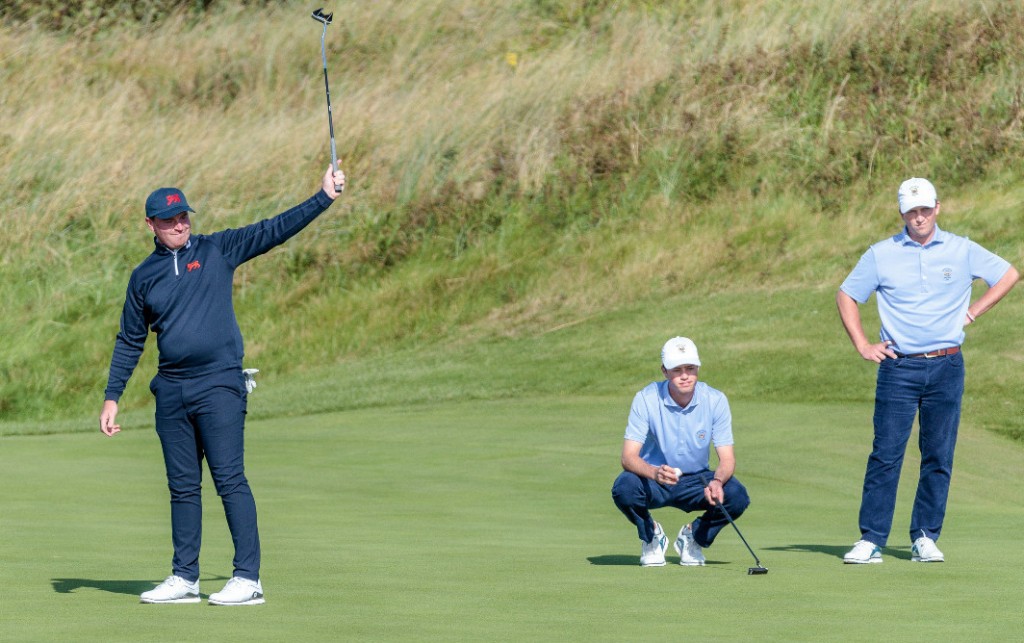 Somerset’s Tom Sloman salutes a winning putt on the 15th in his foursomes match against World No. 1 Hammer Cole. Picture by USGA

Sloman salvaged some pride for the home crowd by beating Steven Fisk by two holes in the bottom match to make the final score 15½-10½.

Cole Hammer – the World No. 1 who was awarded the Mark H. McCormack Medal last month – recorded the biggest victory of the weekend with a 6&5 victory in Sunday singles against Conor Purcelll, having lost his first two matches.

Sloman and Plumb, who had been lined up to reproduce their England and county foursomes partnership, bounced back from losing on Saturday to claim a crucial points in last game before lunch, beating Cole and Fisk 5&3.

The 17-year-old, who was younger than Rose when he made his Walker Cup debut 24 hours earlier, had also seen his unbeaten record go in the foursomes playing with Hall.

Nearly 11,000 fans flocked to Hoylake over the two days, with the match played in sunny, mild conditions with light winds.

Final scores can be viewed here.

•The 48th Walker Cup Match will be held at Florida’s Seminole Golf Club in Juno Beach, from May 8-9, 2021. The traditional September date has been moved to avoid any problems with the hurricane season in the States.