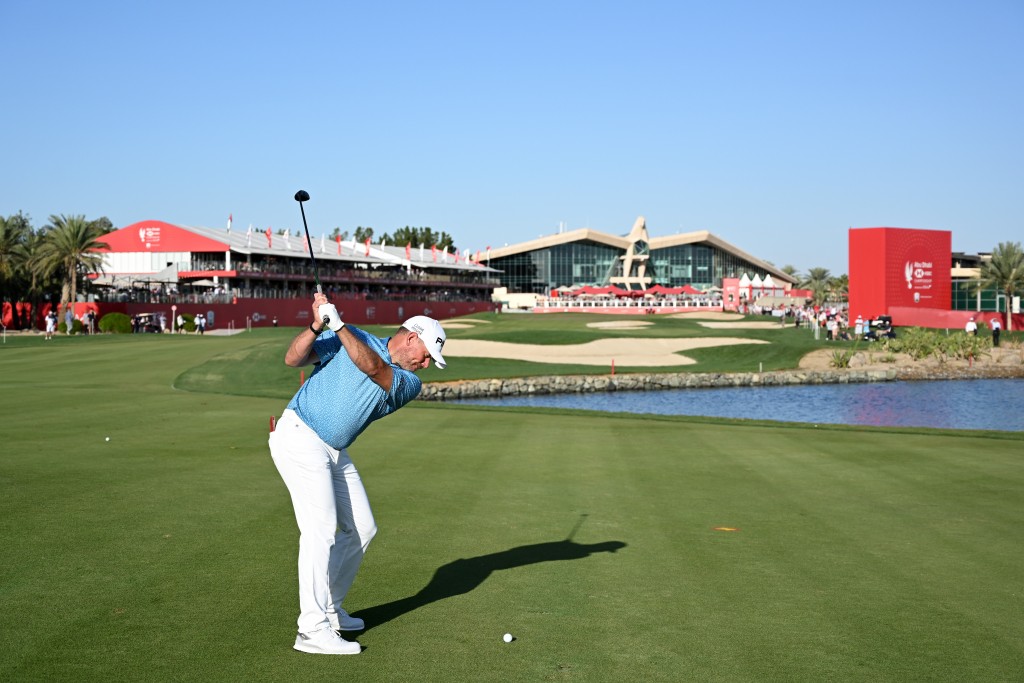 Lee Westwood is on the verge of history with a 25th European Tour victory on the table if he can win the 2020 Abu Dhabi HSBC Championship. Picture by GETTY IMAGES

LEE Westwood takes a one-shot lead into the final round of the Abu Dhabi HSBC Championship as he goes in search of a second Rolex Series title – and his 25th European Tour title.

The “Worksop Wonder,” who now lives in Newcastle’s Jesmond district, produced the shot of the week so far – to set up an eagle on the par-five eighth in a round of 65 that moved him to 14-under par.

That total was a shot clear of Italian Francesco Laporta and Austria’s Bernd Wiesberger, who claimed two Rolex Series titles in 2019.

The 34-year-old would become the first to win three different Rolex events if he can get to the top of the leader board at the end of Sunday’s fourth round in the United Arab Emirates.

Westwood ended a four-year hunt for a European Tour title with an emotional victory at the 2018 Nedbank Golf Challenge.

And the former World No. 1 would take his tally to a remarkable 25 wins across four different decades with a triumph at Abu Dhabi Golf Club, on Sunday.

Westwood said: “I played well. I holed a couple of putts early on which gave me some momentum and then hit a brilliant shot into eight, the par five – with a hybrid – 266 yards to about three feet.

“I then backed it up with a birdie at nine, so a bit of momentum, got on a roll. Had birdie chances on the back nine.

“A bit unlucky on 14, birdied 16 which is not the easiest hole on the course, and a nice birdie at the last.

Westwood, a veteran of 10 Ryder Cup appearances since his debut in Seve Ballesteros’ European-winning team at Valderrama in 1997, revealed he has not been taking it totally easy while resting over the short winter break.

“I’m working on a couple of things on my swing and if I don’t quite get it right I get a bit of pull and I pulled the second shot into 11,” revealed Westwood, who has traditionally always been taught by his dad.

“I didn’t play the best chip, I could to have got it close, but made a nice 15 -footer. They are the kind of putts you need to hole.

“Feel a bit uncomfortable on the greens at the moment. I’ve gone to the claw or pencil grip. I’m hitting a lot of putts where I’m intending to.

“Pretty good at reading these greens and I’m starting on the lines I want.

“Pretty excited. It’s always a bonus to be in contention, and that’s basically why we come out here.

“I’m not going to lie. I didn’t play a lot of golf coming into it – didn’t know what to expect.

“To be in the lead with one round to go or could be tied for the lead when the other lads finish, it’s a real positive.”

Meanwhile, Wiesberger finished with three birdies in a 65 of his own, while Laporta followed up his second round 63 with a 69 to join him at 13 -under.

“Very pleased with today’s work. Obviously at the end it was a little bit wayward at the last, said Wiesberger.

“But glad to hole a nice putt on the last green to come home in 65, and it was quite good.

“I drove it really nicely all day – long and straight, which always helps and I was quite comfortable with my irons, getting it dialled in.

“Unfortunately left a few putts out there on the back nine, but all-in-all, I was able to pick up some longer ones on the last few holes.

“Very pleased with today’s results, added Wiesberger, who won the Scottish and Italian Opens in 2019, and is expected to make his Ryder Cup debut for Padraig Harrington’s European team at Whistling Straits, in September.

“I just feel quite comfortable. Sometimes with me if I get a good tempo, I like putting on these greens, and I feel like I have a good understanding of the pace of the green.

“You know, if you’re confident on the greens, you can make a few out here, but if you’re just off the green, it makes it a bit more frustrating,” added Wiesberger,

“So far, it’s been good on the greens and hopefully continue that into tomorrow,” said Wiesberger, who had to recover from wrist surgery before leading the Race to Dubai going into the DP World Tour Championship, Dubai, in November.

The Vienna pro eventually finished third on the Order of Merit behind winner Jon Rahm and runner-up Tommy Fleetwood, who could well be his Ryder Cup team-mates in eight months’ time.

LAPORTA, who was the winner of the 2019 Race to Mallorca on the Challenge Tour, admitted the step up in class had brought some nerves in his third round having lead after 36 holes.

“I was a bit nervous on the first tee box,” said Laporta who won twice in 2019, including the Challenge Tour Grand Final at Mallorca’s Club de Golf Alcanada.

“Made a bad mistake on two, I was trying to hit it in the middle of the fairway for the second shot and pulled it, so I made a bogey there.

“Then I started to play some good golf and made one birdie coming out, so the front nine wasn’t bad and I played solid on the back nine.

“It would be just a dream,” Laporta admitted about the chances of winning his maiden European Tour victory so early in the new season.

“I just want to think about my score and my game,” the Frenchman added.

Sheffield’s Matthew Fitzpatrick is in fourth place in the United Arab Emirates at 12-under – one-shot clear of 2017 Masters Champion Sergio Garcia and American Kurt Kitayama, who is looking for a third win after picking up two early in last year’s rookie season.

Fitzpatrick and Garcia have yet to win a Rolex Series event since their introduction in 2017 in an event to boost prize money, and keep Europe’s top stars playing on this side of the Atlantic as much as possible.

Belgian Thomas Detry and Spain’s Rafa Cabrera-Bello are at 10-under, with Surrey’s Ross Fisher and Lancashire’s Jack Senior a shot back alongside South Africans Zander Lombard and Louis Oosthuizen and Germany’s Sebastian Heisele.

Only Cabrera-Bello has won a Rolex Series event in that chasing pack.

The Spaniard beat Hertfordshire’s Callum Shinkwin in a play-off, at the 2017 Aberdeen Standard Investments Scottish Open, at Dundonald.

•For live scoring in Sunday’s fourth round click here.