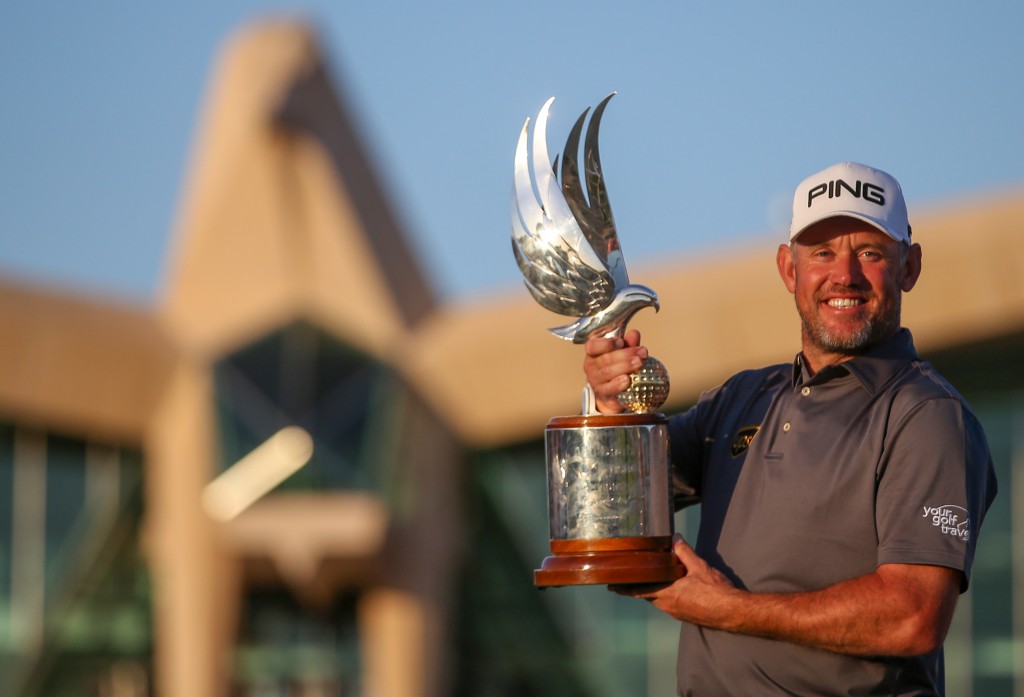 LEE Westwood produced a brilliant final round display to win his 25th event on the European Tour, and take his winning run into a fourth decade at the 2020 Abu Dhabi HSBC Championship.

The Nottinghamshire ace entered the final day with a one shot lead and, while he was briefly caught, he was never passed en route to his second Rolex Series title, after claiming the Nedbank title in South Africa, in 2018.

“It’s just great to keep playing well and know you’re still good enough,” said Lee Westwood, who won 11 times in the first decade of the 21st Century and four more between 2010 and 2019 – after nine victories in his first three seasons in the 1990s.

Westwood, whose European Tour wins have come in 14 different countries across thre continents, added: “I put in a lot of hard work with Phil Kenyon and I’ve been working with Ben Davis on the psychological part of it.

“But I really felt quite calm on the greens this week and rolled a lot of good putts,” added Westwood, who has two PGA Tour victories in America under his belt, but has seen several Majors slip through his grasp.

“That was the key to winning, really,” said Lee. “You’ve got to putt well to win any tournament, but especially these in the desert because the greens are so immaculate. You know that everybody is going to hole their putts.

“I bogeyed 16, but it was a nice, solid birdie at the last and hit two good shots on 17, as well. Some quality golf.

“It’s a long time when you say it. I won my first tournament in 1996 in Sweden,” added Westwood who won five times when claiming the European Tour Order of Merit in 2000.

“I won that tournament, Scandinavian Masters, in three different decades, and now won here this week.

“The 20s could be the ones for me,” said Westwood, who has also won nine Asian Tour tournaments, including two co-sanctioned with the European Tour.

Fleetwood – who won the title in the United Arab Emirates back-to-back in 2017 and 2018 – signed for a 63 and his lowest round at Abu Dhabi Golf Club, and on his 29th birthday.

:“It was good, really good,” said Fleetwood. “It felt like the whole week gradually got better.

“I played so good yesterday and hit a couple of ropey drives and missed a couple of putts and five-under was really the worst the round could have been.

“And then today I just got out and played great, really,” added Fleetwood, who broke a near two-year winless run in South Africa at the Nedbank, in November, before finishing second to Jon Rahm in the season’s climax at the DP World Tour Championship, in Dubai.

“It’s weird, a little disappointed on the last, but you couldn’t really complain about a 63 on the final day,” said Fleetwood. “It looks like Lee is playing great.

“I’m happy to have put a weekend’s golf in and it’s a nice start to the year.”

Meanwhile Dundee-based Perez matched him for the lowest round of his European Tour career, as he went in search of a first Rolex victory.

Perez said: “I felt like I had a really good off-season preparing for the upcoming 2020 season, and obviously very pleased to be able to hold a fourth round on the first event of the year.

“I just thrive on these moments. I think you take a lot from it, and you try to take all the positives.

“I think it shows you that you can do it at this level. Obviously you come into these types of tournaments feeling a lot more comfortable compared to 12 months ago when this was my second Rolex Series event.

“So obviously it’s a lot different than it was 12 months ago. It shows how quickly things can go in this game and obviously I’m going to try to keep on going.”

Five-time European Tour winner Fitzpatrick went bogey-free in a round of 67 as he was forced to settle for a fifth runners-up finish in 14 months.

Fitzpatrick, who had Westwood’s long-time caddy Billy Foster on the bag, said: “Apart from one missed putt, I wouldn’t take a shot back.

“That’s a great feeling, despite not enough to win, it’s been a great week.

“Front nine – I felt like could I hole everything and managed to hole one putt for par, which was nice to keep a bit of momentum going.

“On the back nine, just couldn’t make a thing. It was just one of those days – but hey, that’s golf. I’m delighted. It’s a great start to the year.”

So the day belonged to 46-year-old Lee Westwood, who won his 25th title 23 years, five months and 16 days after his maiden victory at the 1996 Volvo Scandinavian Masters.

To see the final leaderboard in the Abu Dhabi Championship click here.