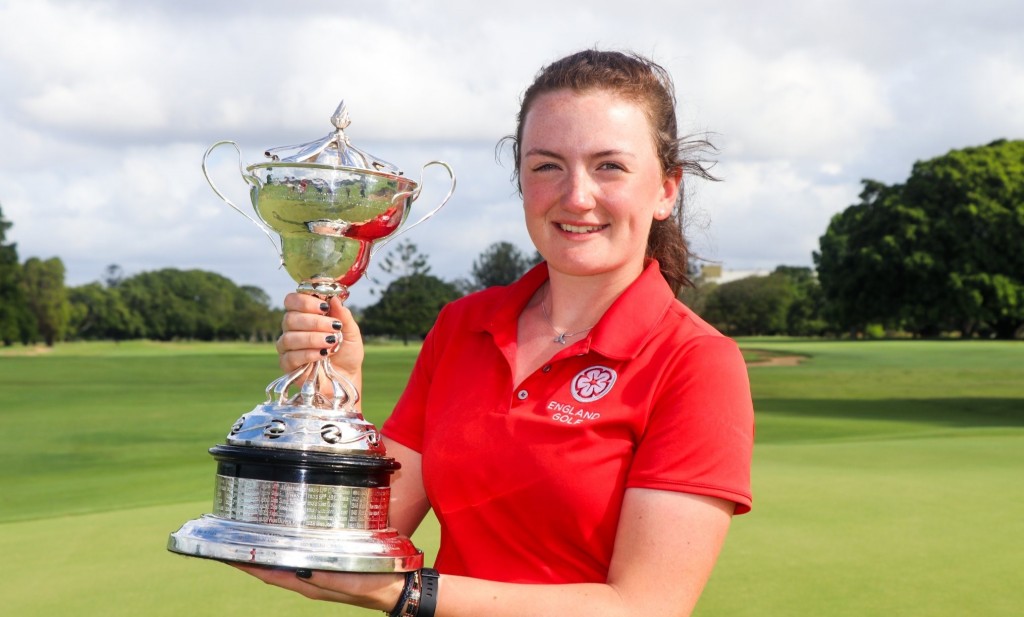 Charlotte Heath is the first English golfer to win the Australian Women’s Amateur Championship since Julie Wade back in 1995. Picture by GOLF AUSTRALIA

CHARLOTTE Heath became just the fifth British player to ever win the third oldest women’s amateur championship in the world at the weekend.

The 18-year-old England international swept away the challenge of Indonesia’s Mela Putri to claim a stunning victory in the Australian Women’s Amateur Championship.

The Yorkshire schoolgirl was too strong for her 22-year-old rival and claimed a majestic 7&6 victory in the 36-hole final at the Royal Queensland Golf Club.

Heath became the first winner from British shores in 24 years and just the fifth to win the Australian Women’s title in it’s 127-year history.

The last was Julie Hall from Felixstowe, who won in Oz in 1995, having won her second Women’s Amateur Championship in the same year, after her first victory in 1990.

The Australian is actually the 10th oldest championship in the world including men’s opens at professional and amateur level.

Heath – a member at Huddersfield Golf Club – got off to a fast start and was three-up after five holes.

Heath’s lead was a commanding eight holes by the completion of the first 18 holes.

The 18-year-old then tightened her grip in the afternoon by holing her approach to the third hole from 180 yards for an eagle – taking her lead to 10 holes.

Putri fought back to win four of the next five and threaten a comeback. But Heath held her nerve to hole a par putt on the 12th and claim the title with six holes to spare.

After the win, Charlotte Heath told Golf Australia: “It was a bit stressful and I was super nervous to start.

“I got off to a quick start and then in the second 18 she started playing really good and it was tense.

“I made two bogeys and she made two birdies and I dropped a few. But I kept my head and kept going.”

The Yorkshire county player has been a frequent visitor to the winners’ circle over the past 12 months, winning the Sir Henry Cooper Junior Masters at Nizels GC, in June, and the Pleasington Putter.

But the win Down Under is by far the most significant of the former England junior international’s young career.

Victory will catapult her up the world rankings from her current position of 226nd.

Heath said describing the moment she hovered over the matchwinning putt: “I was just like ‘hole it’ – it was for a half anyway so if I missed it – and it went six feet past. It didn’t really matter.”

Heath will now be invited to two LPGA events – the Victoria Open and Women’s Australian Open.

But before that Charlotte has some pleading to do with her teachers back at home.

“I’ve never played in LPGA event – hopefully I can get time off school,” said a smiling Heath.

The English star qualified for the matchplay event by finishing in a tie for 17th in the strokeplay.

Rounds of 71 and 74 left Charlotte Heath somewhat under the radar going into the knockout stages.

But while Cornwall’s Women’s Amateur Champion Emily Toy – the top seed after winning the strokeplay – unfortunately fell at the first hurdle to eventual finalist Putri, Heath got up a head of steam as the week wore on.

A 4&2 win over Australia’s Fiona Xu earned Heath a place in the last 16 where another local hero – Charley Jacobs – was brushed aside by the same score.

On Saturday, a third Aussie was put to the sword in the quarter-finals when Heath triumphed over the much-fancied Lian Higo booking her place in the last four with a 3&2 winning margin.

South Korea’s Minju Kim was next up, but with Heath’s confidence rapidly rising the English women’s international notched another impressive 3&2 win to reach the final.

Then came the crowning glory with Heath thoroughly deserving of her plaudits.

•To see how Charlotte Heath got to the final click here for the full matchplay results and for the strokeplay qualifying scores click here.

Jones and Strickland knocked out in semi-finals of Australian Amateur 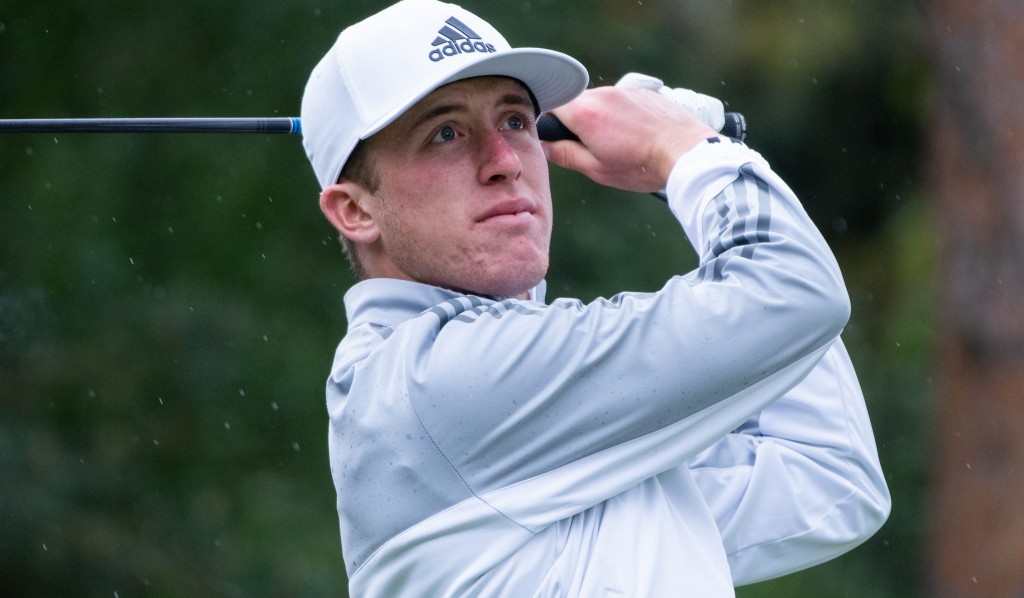 Northamptonshire County’s Ben Jones was knocked out in the semi-finals of the Australian Amateur Championship, losing to Ireland’s Tom McKibbin, who lost in the final.
Picture LEADERBOARD PHOTOGRAPHY

Lamb, from Hexham, a member of the victorious Home Internatinals team in September, had his run halted to the last eight by Australia’s Louis Dobbelaar, in the third round.

However, Jones, the losing finalist in last summer’s Amateur Championship and Ham Manor’s Strickland battled through to the semi-finals.

But with an all-English final beckoning – which would have created some unparalled history at an overseas championship – they were both knocked out.

Jones’ match with Northern Ireland’s Tom McKibbin was nip and tuck all the way with the man from Holywood edging it by a single hole.

Australia’s Jediah Morgan – who went on to win the event – had too much in the tank for Strickland, who lost 5&3.

Strickland is one of nine players in the England Men’s squad for 2020. The former England Boys cap, who missed most of 2018 after being diagnosed with epilepsy, claimed the Selborne Salver, at Blackmoor GC, last April.

Rotherham’s Ben Schmidt – who claimed the English Men’s and Boys Amateur Strokeplay double last year – was one of eight England players in the 198-strong field that failed to make it through to the last 64.

The youngest-ever winner of the Brabazon and the youngest to win the Carris in the same season at just 16 – to break Sandy Lyle’s 42-year-old record – missed out by four shots after an opening 80 on the Brisbane Course.

The Australian Amateur is the ninth oldest golf championship in the world and has only been won by two Englishmen in its 127-year history – the MP Michael Scott won it three times in four years from 1905-8.

Middlesex’s Warren Bennett, from Ruislip GC, won the title in 1994, at Royal Sydney GC – the same year he claimed the Lytham Trophy and represented Great Britain & Ireland in the Eisenhower Trophy at the World Amateur Team Championship, at Versailles, in France.

•For full strokeplay scores in the Australian Amateur click here and to see the matchplay results click here. 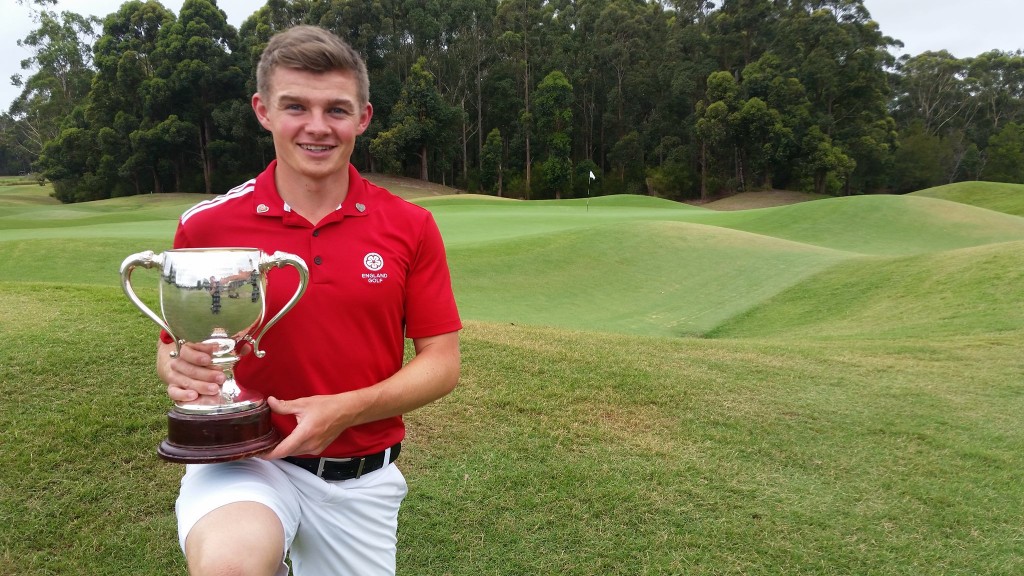 THE seven-strong England squad (five men and two women) move on from Royal Queensland to play in the New South Wales’ Amateur being held jointly at St Michael’s Golf Club and the Coast Golf Club in Little Bay.

England have a great record in the NSW Amateur, with Hampshire’s Scott Gregory winning in 2017, beating Sussex’s Marco Penge in an all-English 36-hole final.

Staffordshire’s Gian-Marco Petrozzi kept the trophy in English hands a year later while Formby’s Paul Howard (2015), Jack Senior (2011) and Gary Wolstenholme (2007) have all taken the title in the 21st Century.

Their Australian adventure ends with the Avondale Amateur at Avondale Golf Club from January 28-31.