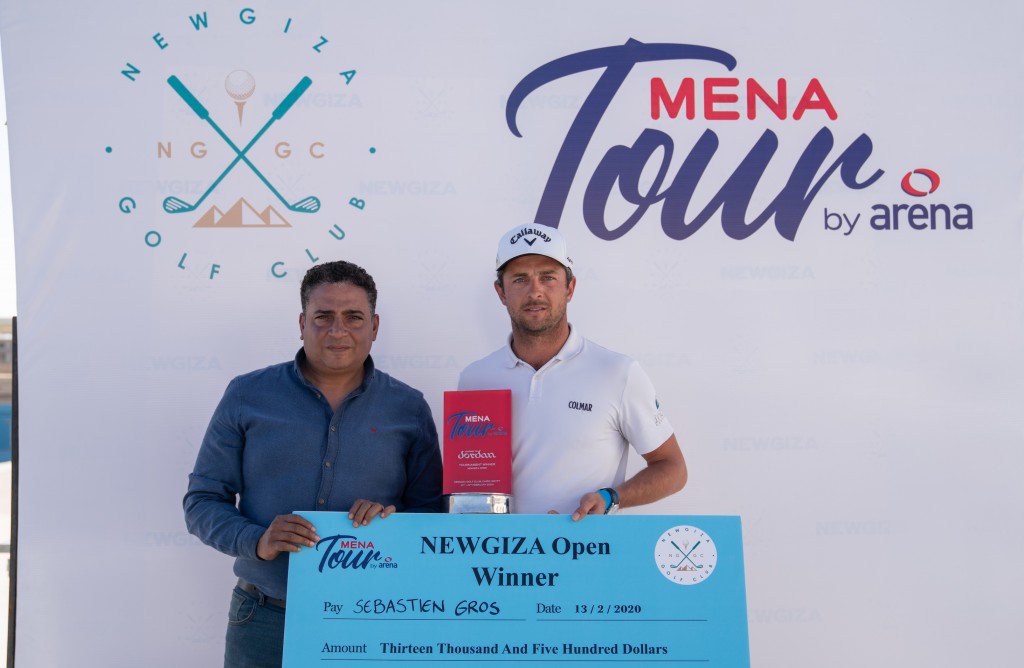 Sebastien Gros (right) with Ali Mohamed, director of Operations at the NewGiza Golf Club after his two-shot victory over Yorkshire rookie David Hague

FRENCHMAN Sebastien Gros is determined to resuscitate his career this year.

And the two-time Challenge Tour winner made a brilliant start in that direction by claiming the inaugural NewGiza Open.

Gros said: “This is fantastic. I have worked very hard this winter along with my team.

“To get a win so early in the season is surely going to give me a lot of confidence going forward.”

The Frenchman took full advantage of the easier opening stretch of NewGiza Golf Club’s stunning course built in an old quarry against the backdrop of Cairo’s famous Pyramids.

Gros made three birdies in his first four holes, and then added two more in a round which saw him hit 16 greens in regulation.

“I missed the green on the eight and had a poor tee shot on the 16,” said Sebastien Gros.

“Those were the only two holes where I had to battle for pars. It was very solid otherwise.

“I got off to a good start and was very pleased when I two-putted for birdie from 95 feet on the third.

“That was a very good first putt to tap-in distance despite facing two or three breaks,” Gros added.

“Immediately after that, I hit what was possibly my best shot of the day on the fourth – a five-iron against the wind to about six feet.

“It was after that fourth hole that I felt I could win this. My long game was very good throughout the day once again, and even though I missed a few other birdie chances, I putted well too.”

The 31-year-old – who lost his European Tour card in 2018 after playing at the highest level for three years – started the final round two shots behind overnight leader Curtis Knipes.

But having overtaken the 2018 English Champion of Champions, Gros finished two ahead of eventual runner-up David Hague.

Gros played a second straight bogey-free round on his way to a five-under par 67 that was one better than his second-round 68 to post 13-under.

It proved enough to claim the winner’s cheque of $13,500 and moved him into second place on the Journey to Jordan rankings, with a place in next year’s Dubai Desert Classic going to the eventual MENA Tour Order of Merit winner.

Young Hague, who decided to turn pro after securing his card at the MENA Tour Qualifying School, almost turned his second start as a professional into a dream win.

Last year’s Lee Westwood Trophy winner could have finished much better than his eventual 11-under total.

But Hague paid the price of making a late bogey on the par-five 17th hole.

And he was delighted with his performance this early in his professional career, having faded out of the race for a Walker Cup call-up against the Americans at Hoylake last year, after being a regular in the England set up for three years.

“I got off to a hot start and was eight-under par through 13 holes,” said Hague.

“Slightly disappointed with the finish as I missed a birdie chance from six feet on the 15th, then three-putted from 15 feet on the 17th hole for my only bogey of the day.

“I also missed an eight-footer on the 18th,” said the 23-year-old, from Malton and Norton GC, near York.

“But seven-under par is a great round and I am really pleased with the way I have played, especially after missing the cut last week in Jordan.”

Sebastien Gros trails Langley by $735 as the players prepare for the third of the 11-strong schedule for the firts half of the MENA Tour season.

IRELAND’S Conor Purcell made a great start to his MENA Tour career as well, finishing tied third after a closing 67.

The Portmarnock pro, who played in Great Britain and Ireland’s Walker Cup defeat against the Americans at Hoylake, in September, finished alongside the promising Swede Niclas Weiland, who carded a 68.

Overnight leader Knipes meanwhile never got going after a triple-bogey seven on the par-four eighth hole.

The MENA Tour by Arena next moves to Muscat, Oman, for the Ghala Open from February 17-19.

The winner of the tournament gets a spot at the European Tour’s Oman Open, held the following week.

•For details of the players entered in the Ghala Open click here.