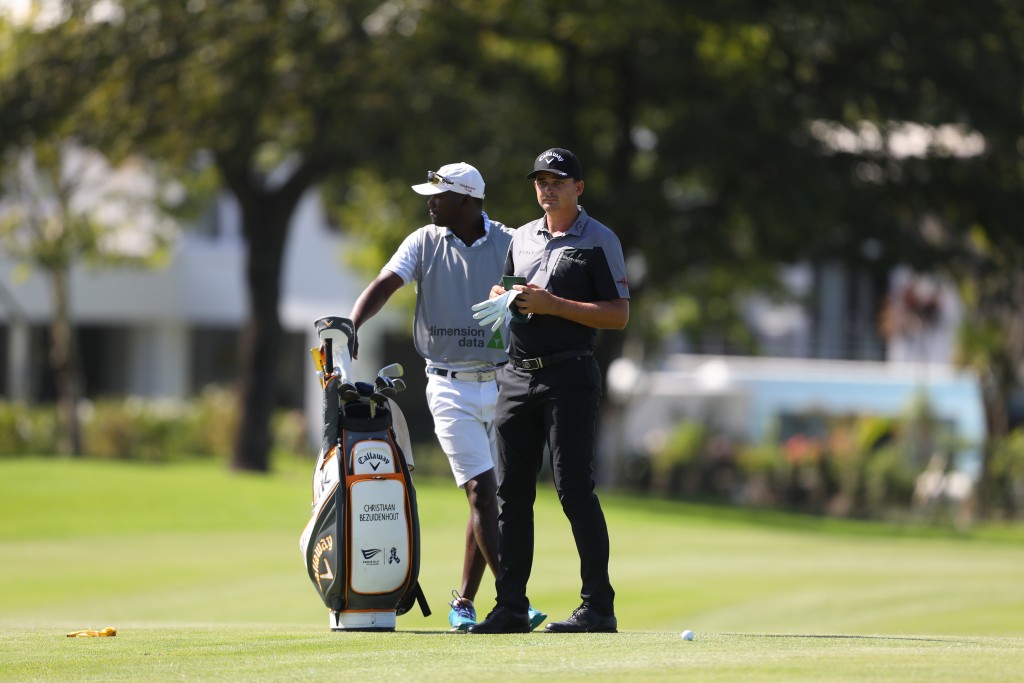 Christiaan Bezuidenhout stormed into the first round lead at the Dimension Data Pro Am with a superb 11-under par 61, at Fancourt’s Outeniqua Course. Picture by GETTY IMAGES

CHRISTIAAN Bezuidenhout took full advantage of benign early conditions at Fancourt Golf Estate to post an 11-under par round of 61 on the opening day of the Dimension Data Pro-Am.

The South African, who lost a play-off against Australian Lucas Herbert at last month’s Dubai Desert Classic, recorded a blemish-free round on the Outeniqua Course.

Bezuidenhout will take a two-stroke lead into the second day ahead of Spain’s Santiago Tarrio Ben, who recorded a nine-under par 63 on the Montagu Course.

The World No. 60 made the turn in 31 strokes and required one fewer on the way in to take full advantage of the generous Outeniqua Course, recording the lowest round of his career in the process.

“I got off to a good start today with birdies on the first couple of holes,” said Bezuidenhout, who won the Andalucia Masters at Valderrama, in June.

“It was crucial to get off to a good start because, over the years, the Outeniqua has been the scoreable course so I’m obviously very happy with my 61.

“I was especially happy with my start – I was four-under after five holes, so that also helps,” added 25-year-old Bezuidenhout, whose sole Sunshine Tour win came in the 2016 Sun Fish River Challenge.

“It’s a bit shorter than the other courses and there’s a bit of space to miss here and there.

“All the par fives are reachable, so you want to make birdies on them and there are also four or five short-ish par fours where you’re only going into the green with a wedge, so you need to take advantage of those.

“I know I’m close to breaking into the world’s top 50, but I set myself a goal to finish the year inside the top 50,” said the Johannesburg pro who also won twice on the Big Easy Tour, in 2015.

“If it doesn’t happen this week, then I’m just going to keep going and see if I can achieve my goal by the end of the year.”

The Dimension Data Pro-Am celebrates its 25th anniversary this year – and with the European Challenge Tour co-sanctioning the event with the Sunshine Tour for the first time in 2020 – Bezuidenhout hopes to see it go from strength-to-strength in the future.

“This tournament just seems to get bigger and better every year, with better players,” Bezuidenhout added.

“It’s great to see the partnership with the Challenge Tour and the Sunshine Tour,so hopefully it can keep growing for the next few years as well.

“This is an unbelievable place, one of my favourite places in South Africa. I normally come here during our summer breaks and it’s just beautiful.

“All three courses are in great condition, the weather is perfect, so I can’t complain.”

The majority of low scores were carded on the Outeniqua Course on day one, with only six of the top 17 playing the Montagu or The Links first off.

A shot behind Els and Ferreira is a group of seven players on seven-under, including Limpopo Championship winner JC Ritchie and multiple European Tour winners George Coetzee, Haydn Porteous and Germany’s Marcel Siem.

Every player will tee it up on each of three courses at Fancourt Golf Estate this week, with leader Bezuidenhout taking to The Links at 9.20am local time for his second round on Friday.

•For live scoring from the Fancourt Golf Estate, click here.