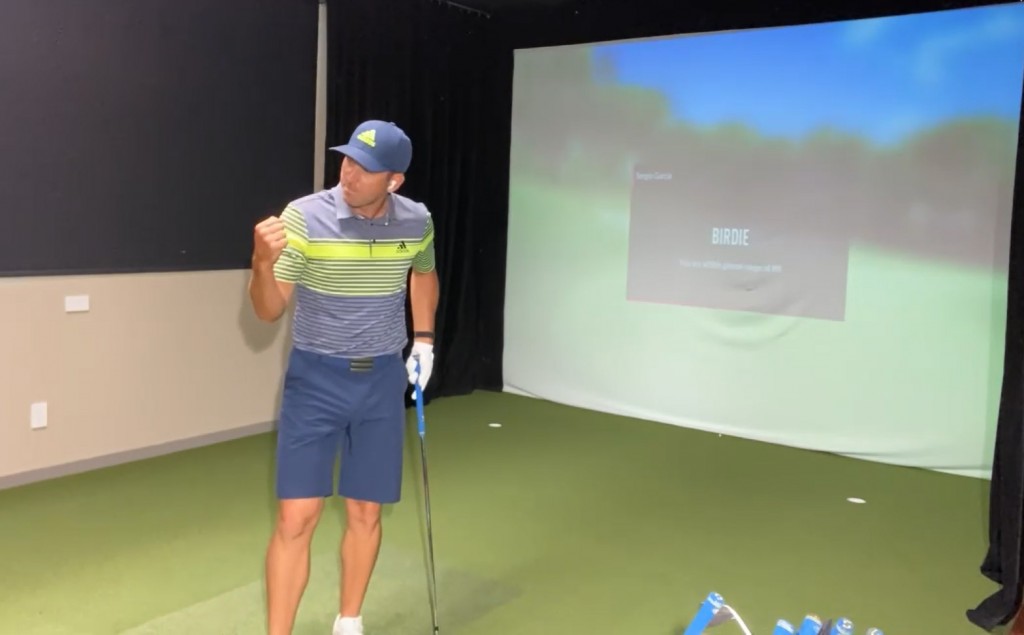 Sergio Garcia salutes a birdie on his way to a five-share of the virtual BMW Indoor Invitational at his favourite Valderrama course. He earned $2,000 for Spain’s Red Cross.

HOME favourites Sergio Garcia and Rafa Cabrera Bello, finished in a five-way tie for first place when a virtual Valderrama hosted the latest leg of the BMW Indoor Invitational.

They both finished on one-under after shooting 70s in their 18 holes.

Spain’s famous Ryder Cup venue proved a tricky test in the fourth of five events in the new series of virtual tournaments, using the latest simulator technology powered by TrackMan.

They were joined at the summit in Andalucia by Scotland’s Connor Syme.

The Dundee pro celebrated a second win in the series of virtual events – following his victory at Royal Portrush two weeks ago.

The money will go to charities chosen by each of the five winners.

Garcia famously triumphed three times in the flesh at the Sotogrande venue in the Andalucía Masters between 2011 and 2018.

The 2017 Masters winner opened his round with a triple bogey before recovering with three birdies in the next four holes.

He donated his share of the prize fund to Spain’s Red Cross.

Garcia recently donated to the Red Cross alongside fellow Spanish sports stars to help in the fight against the coronavirus.

A DELIGHTED Garcia said: “I can’t think of a better cause than the Red Cross to donate to – to try to help as many people as possible in these very difficult times.

“It’s great to be a part of this and have the possibility to help people who need it most in uncertain times.

“I’m glad that I was able to play well enough to be part of the donation.

“I can’t wait to see all those people get better and hopefully get back to normal lives as soon as possible.

“We had a good time Rafa and I playing together. Unfortunately I had a terrible start with a triple on the first.

“But I came back nicely and Rafa eagled 17 to get to one-under. It was fun to do it.

“It was different. But it shows you how difficult Valderrama is even on TrackMan with pretty benign conditions, that one-under par was a tie for the lead.” 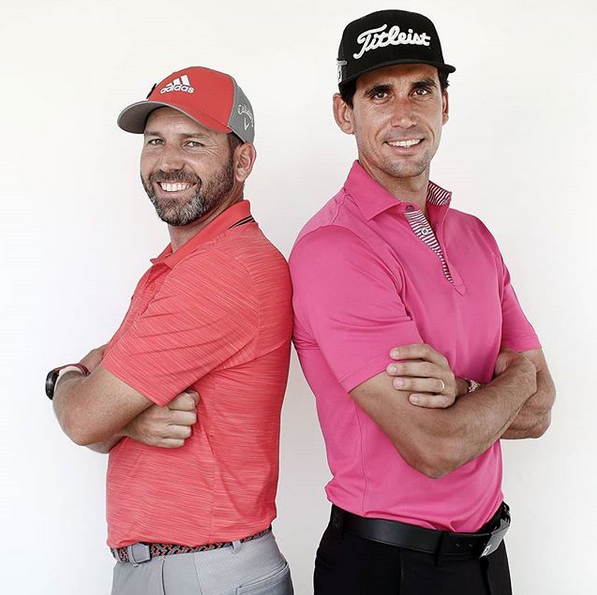 Sergio Garcia and Rafa Cabrera-Bello played in the featured group at the BMW Indoor Invitational at a virtual Valderrama. Picture EDAMVALDERRAMA / Instagram

CABRERO-BELLA had a rollercoaster round that included four birdies and an eagle as well as three bogies and a double.

Rafa said: “It was different of course playing the course on TrackMan, but it did have a lot of similarities – and it did feel pretty real.

“On the green shapes you could see the run-offs and it was playing as real as it could possibly be.

“BMW does a lot of charitable work, not only during these hard times but also every year. They are a very generous company.

“So to be able to participate in this event for charity was really fun. Also to have the opportunity to win alongside friends and share it a little bit was great.”

Syme is celebrating for the second time in three weeks after topping the leaderboard at Royal Portrush.

He said: “It feels great to be a tied winner this week. Guys like Sergio and Rafa were involved. So to compete with them and be tied at the top was cool.

“Valderrama was as tough as it is in real life. On holes like the second – where you try to run it under the tree on the fairway – it is so realistic.

“My wedge game was good and that was the only reason that I managed to get the joint best score.

“It’s great to be a part of it and I can’t thank BMW and TrackMan enough for these opportunities.”

THE 38-player field – which also included former World No. 1 Martin Kaymer and Belgian Ryder Cup star Nicolas Colsaerts – competed virtually from their own homes in the 18-hole strokeplay event.

Damien Perrier finished in second place in week one over the Old Course at St Andrews.

And he went one better this time, birdieing the last two holes to recover from a double-bogey on the 16th and seal a tie for top spot.

He said: “After my second place at St Andrews, I’m very happy to be tied for the win this week alongside great names such as Sergio Garcia, who we all know loves this course.

“I remember the last time I played at Valderrama I was alongside Martin Kaymer.

“We almost didn’t see each other because I spent my whole round enjoying the shadow of the trees. This week I took my revenge and I’m proud of it!”

Links-lover Jordan just as at home at Valderrama

MATTHEW Jordan was participating for the second consecutive week and he leapt up the leaderboard after an 18th place finish last week at Germany’s Munchen Eichenried.

The 24-year-old Hoylake ace, who grew up playing links golf, said: “I’m delighted to get the win at Valderrama – it’s one of my favourite courses.

“It’s a bit tight and narrow so any of my friends watching this will be confused as to how I won.

“I would like to say a massive thank-you to BMW, the European Tour and TrackMan for putting this event on.

“Lockdown has been difficult for most of us, so just to have something to look forward to and compete in, has been great.”

The winning fivesome finished one shot ahead of a group of seven players who shot level-par 71s around the virtual Valderrama.

They included French trio Benjamin Hebert, Raphael Jacquelin and Romain Langasque. Kaymer, Italian Nino Bertasio and Cheshire’s Paul Waring were then a shot further back in a tie for 13th place.

Fans were able to follow using #BMWTrackManInvitational as footage was shown on the European Tour’s social media channels – and at bmw.trackmaninvitational.com