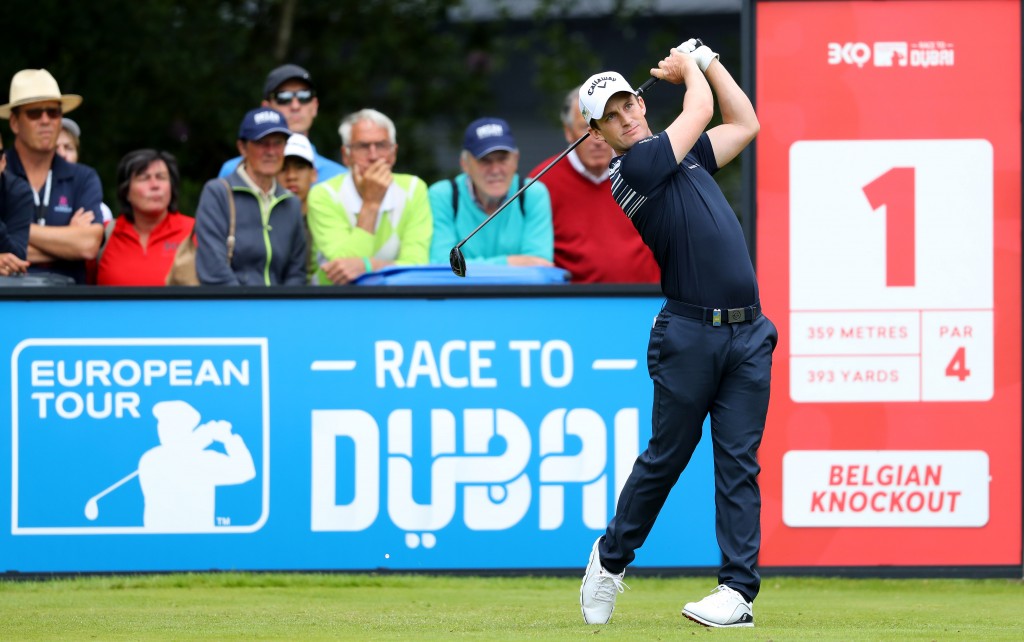 Northumberland’s Chris Paisley fired a second successive 65 to top the leaderboard to secure top seed in the Belgian Knockout. Picture by GETTY IMAGES

CHRIS Paisley came home in 30 to sign for a second consecutive 65 and secure top seeding heading into the weekend at the Belgian Knockout.

The Englishman moved to 12-under to finish one shot clear of Section B winner Anton Karlsson, with the top 32 from Sections A and B advancing to the knockout stages at Rinkven International Golf Club.

Paisley, who played at Northumberland’s Stocksfield GC before graduating from the University of Tennessee and playing in the 2009 Walker Cup at Merion, said: “It’s great to play well again, to follow up a low round with another one is great.

“I played very similar to how I did yesterday, kept myself in play off the tee and hit a lot of nice wedge shots and holed a few mid-range putts.

“It really suits my strengths, the strengths of my game are my putting and wedging and you have a lot of wedges into these greens and I seem to be hitting it straight at the moment so it sets up perfectly for me

“You try to win every week and this week is a bit of a different one, slightly annoying that those two rounds are going to be basically wiped clean.

“I’m playing well, I enjoy match play and I enjoy the course, so I’ve got a chance,” added Paisley, who won three times on the Alps Tour in 2011, before his maiden win on the European Challenge Tour at Stoke by Nayland, in 2012.

“It’s strange knowing I was close to the lead, but it didn’t really matter as long as I didn’t make a 10 coming down the last few holes.

“I wanted to get off to a solid start and keep myself calm because if you go out and make a double bogey early it might spiral out of control on that course. I started off really nicely with a birdie and I was just quite comfortable.”

Karlsson, who is looking for his maiden European Tour win in his second full season on tour, said: It was good and, in a way quite similar to yesterday.

“I still struggled off the tee, but I have been hitting the irons and wedges really well. I made a few less putts today which kept the score not on the same level as yesterday but overall, I am really happy.

“I have been playing well for some reason here, but it has always been different courses. It is the third time I’ve been in Belgium playing and the third one so far that has been good. Similar courses though every time, I think the tree-lined courses suit me well.

“Obviously this week on how far I have played so far it would have been nice to keep playing the strokeplay way, but we have always been prepared for the change over the weekend.”

The remaining 64 players will now go head-to-head over six rounds of nine-hole strokeplay knockout to find a winner at the second staging of the innovative event.

Norwegian Espen Kofstad fired a 67 to finish second in Section A at nine-under, a shot clear of Dutchman Darius van Driel and two ahead of England’s Oliver Wilson.

Last week’s Made in Denmark winner Bernd Wiesberger carded the lowest round of the day with a 64 to recover from an opening 76 and finish one shot above an eight man play-off for the final five spots.

After one trip up the play-off hole, it was English pair Tom Lewis and James Morrison, and Australian Adam Bland who missed out as they all bogeyed after errant tee shots.

Paisley has now shot three consecutive rounds of 65 after finishing strongly for a top five at last week’s Made in Denmark, and will be looking to add to his sole European Tour win last year at the BMW South African Open.