By Andrew Griffin on 10th September 2020 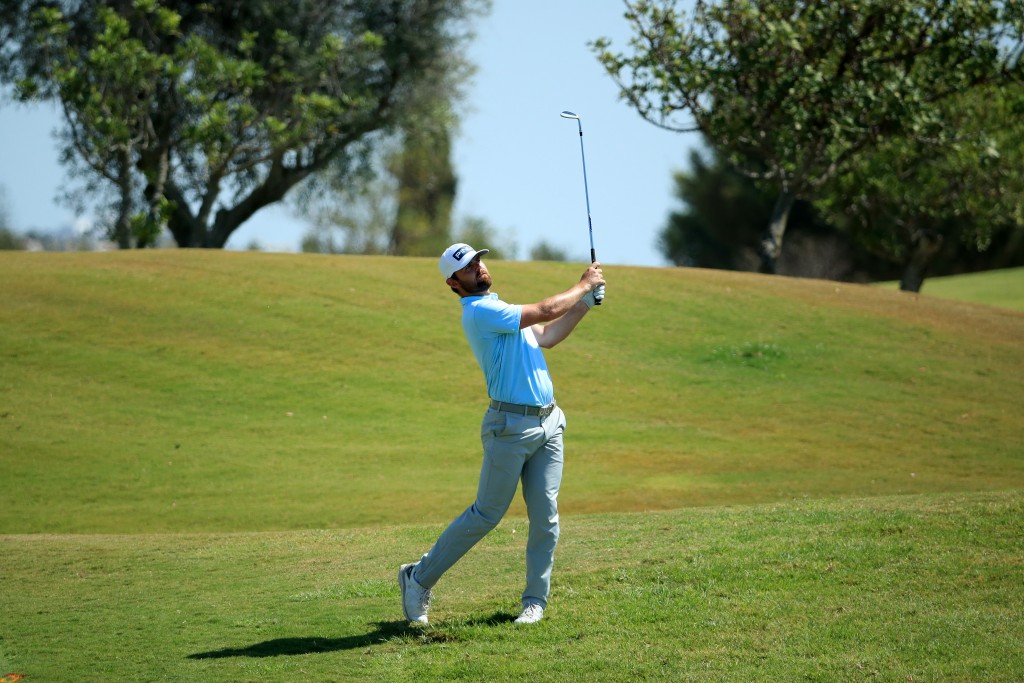 Liam Johnston, who shot a superb 61 to lead the Portugal Masters after the first round, at Dom Pedro Victoria Golf course. Picture by GETTY IMAGES

The 26-year-old from Dumfries fired a sparkling round of 61 to lead by one shot at the end of the opening day of the 2020 Portugal Masters.

At nine-under par through 16 holes, the Scot was in contention to match the historic 59 Oliver Fisher shot on the same Algarve course two years ago.

He narrowly cleared the water with his approach into the par-five 17th, but could not hole his eagle putt from range.

A par on the last took the two-time European Challenge Tour winner to 10-under, one shot ahead of Frenchman Julien Guerrier.

Johnston, who won the Kazakhstan Open two years ago to earn his European Tour card, said: “With the rough out there, it’s nice to keep the bogeys off the card.

“I saved well when I needed to and holed a lot of putts out there. Delighted with the 10 birdies.

“I told my coach back home I was swinging it as good as I ever have, and my game feels like it’s trending in the right direction.

“More importantly, I’m in a really good place mentally. I didn’t see a round like this coming. But I felt like I was playing well,” said Liam, who won the African and Scottish Amateur strokeplay titles in 2017.

INEVITABLY, much of post-round talk was how aware was he that he had a real chance to equal Oliver Fisher’s record-breaking 59 at the Victoria Course in 2018.

Johnston said: “I had no idea. I was just talking to Kristoffer Broberg and just noticed it was a par 71.

He added: “I thought it was a par 72. Obviously, I was trying to hole that putt on 17 to make eagle, and just left it a little bit short. Nice par on the last.”

Johnston has been friends since childhood with Grant Forrest and Connor Syme. The latter had a very successful UK Swing, finishing third in the Celtic Classic at Celtic Manor.

Liam freely admits their successes – and that of Sir Henry Cotton Rookie of the Year Bob MacIntyre – are spurring each other on as they seek to match last year’s European Tour win Down Under by David Law, who is slightly older.

“We’ve all known each other for ages and feed off the success each other has,” said Johnston in 2018.

Frenchman Guerrier has struggled to match his victory in The Amateur Championship in 2006, when he beat Surrey’s Adam Gee, at Royal St George’s.

Guerrier said: “I really enjoyed how I played the course. The conditions were great. The weather was perfect. I played great. I hit a lot of fairways and I think that is the key here.

“As soon as I hit my ball into the rough it was a different hole. You fight for the par and when you put your ball on the fairway it’s like a birdie chance.

“You try to make it the best you can,” said the 36-year-old, who shot a 60 during the 2009 European Tour School, where he earned his first card.

Laurie in second place at a Canter

MEANWHILE ex-Somerset county player Laurie Canter was at seven-under after a round of 64, with all of the leading three players going bogey-free in Vilamoura.

The 2010 South African Amateur and South African Strokeplay winner said: “I don’t think I’ve done that for a while to be fair, bogey-free, I’ve had my fair share of bogeys so it’s nice to keep them off the card for a day.

“There’s a couple of new things I’ve been working,” the 30-year-old revealed.

“Nothing radical really. Just some good, smart advice from some good coaches and my other half, Anna, is now my manager. So I’ve got to put it down to her really.”

But the Bath-based golfer is still looking for his maiden European Tour win having turned pro in 2011.

NORTHERN Ireland’s Jonathan Caldwell, who partnered Rory McIlroy at the Walker Cup, in 2007, is another Great Britain and Ireland player at six-under.

The 36-year-old from Bangor, who has two wins on the PGA EuroPro Tour, was one shot ahead of South African George Coetzee – one of the pre-tournament favourites.

The pair were joined on that number by Cheshire’s Walker Cup player Matthew Jordan, Denmark’s Ryder Cup player Thorbjørn Olesen and Sweden’s Sebastian Soderberg, whose maiden win came a year ago at Crans, in Switzerland.

A group of 12 players are then at four-under, with World No, 16 Tommy Fleetwood, and the highest-placed Portuguese player – Tomás Bessa – among a further eight players at three-under.

Fleetwood happy with driving as US Open draws near

FLEETWOOD playing in the event for the first time in four years was pleased as he started his preparations for next week’s US Open in earnest.

“Overall I was happy,” said the five-time European Tour winner. “I had a dodgy spell through three, four, five, six and then started hitting it well and had chances.

“The course is a different test to what it’s always been. I drove it great – ignore the one on the last.

“I drove it really well and gave myself a lot of chances. It’s nice to be playing this course again.

“I felt like I was working hard, like every shot. But the more I felt myself strike the golf ball, look up and seeing it doing what I would like it to do, the more confidence you build.

“And that’s exactly why I’m playing this week. You’ve got to play golf really, in tournament conditions.

“And it’s always nice to see some work pay off in a tournament.”

Meanwhile, India’s Shubhankar Sharma recorded the first albatross on the 2020 Race to Dubai, holing out from 241 yards with his second shot on the 588-yard par-five 17th hole.

•Follow live scoring in the second round of the Portugal Masters by clicking here.