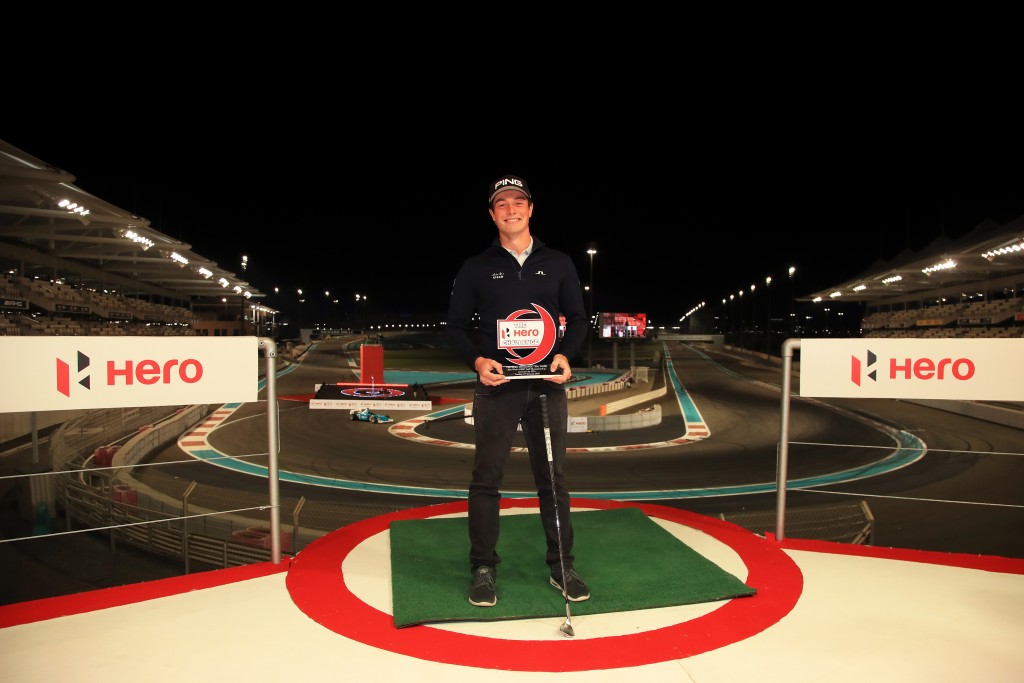 With his final shot of the night worth double, Hovland delivered a “bullseye” 50, to add 100 points to his final total of 190 points, easily surpassing Oosthuizen’s total of 55.

It was the Norwegian’s debut in the European Tour’s innovative shootout which was played under lights in the iconic Yas Marina Circuit, in Abu Dhabi, where some of the world’s best players are gathered for the Abu Dhabi HSBC Championship.

“I can’t complain, that was a pretty good start to the week” said 22-year-old Hovland. “It’s an insane venue, I have never been to a place like this, so what a place to get my first professional victory.”

“I hit some pretty nice wedge shots tonight so hopefully that carries through to the tournament this week.

“To win the Hero Challenge is pretty cool and I’m looking forward to playing in the Abu Dhabi HSBC Championship in a couple of days.”

The pair were joined by Major Champions Brooks Koepka and Danny Willett, plus European Tour stars Matthew Fitzpatrick and Bernd Wiesberger for the innovative shootout at Yas Marina.

Former Masters Champion Willett and fellow Yorkshireman Fitzpatrick – a previous winner of the Hero Challenge in Scotland last year – both bowed out in the first round.

Hovland then defeated World No. 1 Koepka in the first semi-final, before Oosthuizen held off Austria’s two-time Rolex Series winner Wiesberger to progress to the final, where Hovland got the better of the South African to claim the 11th edition of the popular Hero Challenge.

Hovland won the US Amateur at Pebble Beach in 2018 and finished 12th at the iconic Californian course when it staged the US Open a year later.

Having also finished as the low amateur at last year’s Masters at Augusta, the Norwegian’s switch to the pro ranks was eagerly anticipated last season as his total at Pebble Beach broke Jack Nicklaus’ record for the low amateur score in the US Open dating back to 1960.

Hovland would have been eligible to play last year’s Open at Royal Portrush as the reigning US Amateur Champion, but turned pro after the US Open.

The Oklahoma State University graduate made his debut at The Travelers Championship, in Conneticut, and earned his PGA Tour card via the Korn Ferry Tour thanks to his second place finish at the Albertson Boise Open.

Hovland finished fourth at the Wyndhams Championship at Sedgewick Country Club, in August, was tied 11th on his European Tour debut in the BMW PGA Championship at Wentworth, in September.

With a likely rapid rise up the Official World Golf Rankings, Hovland can look forward to choosing where in the world he wants to play in 2020, with sponsors HSBC keen to help him with a start in Abu Dhabi this week.

HERO MotoCorp, the world’s largest manufacturer of motorcycles and scooters, extended the Hero Challenge on the European Tour until 2022 before Christmas, with the number of annual events increasing from three to a series of five.

Following Abu Dhabi, the event moves to Europe for three more exciting editions, including the Scandinavian Mixed hosted by Henrik and Annika in Stockholm and the Porsche European Open in Hamburg.

The Betfred British Masters, which is being hosted by Lee Westwood at Newcastle’s Close House, in May is the only Hero Challenge on UK soil this year.

The series finale will take place ahead of the European Tour’s season-ending DP Worldl Tour Championship, in Dubai, and will feature the winners of all four Hero Challenges from the 2020 campaign.

THIS week’s Abu Dhabi HSBC Championship once again takes its place as part of the Rolex Series – the premium category of tournaments on the European Tour’s Race to Dubai, each with a minimum prize fund of $7 million.

American Presidents Cup winners Bryson DeChambeau and Patrick Cantlay are in the field alongside Koepka, who returns to action after pulling out of Tiger Woods’ team that beat Ernie Els’ International side at Royal Melbourne, in December.

Koepka has recoverd from knee surgery in October, after playing through the pain for seven months in 2019 before going under the knife after aggravating his injury at the CJ Cup, in South Korea, after slipping on a hard surface.

The World No. 1 will be looking for a strong start to the season as he tries to win his third Sam Wanamaker Trophy at May’s USPGA at San Francisco’s TPC Harding Park, in May.

•For tee times in Thursday’s first round in the Abu Dhabi HSBC Championship click here.