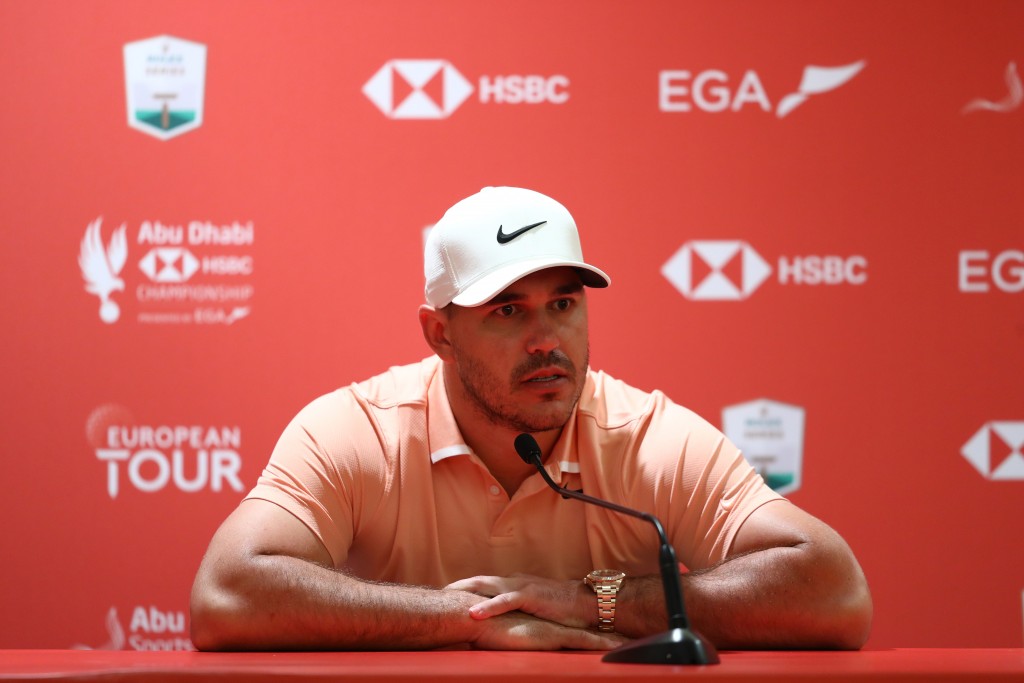 Brooks Koepka will play for the first time since the CJ Cup in South Korea when he tees it up in the Abu Dhabi HSBC Championship this week. Picture by GETTY IMAGES

WORLD No. 1 Brooks Koepka is keen to add a Rolex Series title to his already impressive CV, as he makes his comeback from a knee injury at this week’s Abu Dhabi HSBC Championship after missing last month’s Presidents Cup.

The four-time Major winner returns to Abu Dhabi Golf Club for the third time – having secured a top-10 finish at the venue two years ago – for the first of eight Rolex Series events on the 2020 Race to Dubai.

The American is competing for the first time in three months, after withdrawing from the Presidents Cup squad to have knee surgery.

Koepka, who claimed his his first US Open at Erin Hills in 2017, said: “These Rolex Series events are where you have more emphasis on winning. It’s what you want to win.

“The players that are playing in this event are obviously really good – some of the best players in the world. That’s why I think everyone’s here.

“You want to play in the best events you can and win them,” added Koepka, who spent three years playing on the Challenge and European Tour before earning his card on the PGA Tour with a fourth place finish in the 2014 US Open at Pinehurst.

“I love this place, it’s always fun to get back to. The golf course is really good. I feel comfortable here and hopefully play well this week, said Koepka, who claimed three wins on the Challenge Tour in 2013.

“I’m just excited to hit balls,” said Brooks, who has had to to miss nearly three months golf after damaging his kneecap at the CJ Cup, in South Korea, in October.

“In Korea I re-tore it, and the kneecap had moved into the fat pad. That’s excruciating. It’s a lot of pain. It’s not fun,” said Koepka, who first injured his knee back in March – but still managed to win his second Wannamaker Trophy at Bethpage Black, less than two months later.

He required stem cell treatment after the Tour Championship at East Lake, in August, before hurting it again on the PGA Tour’s Asian swing.

He pulled out of the trip to Australia for the Presidents Cup three weeks before the biennial event got under way – handing his spot to Rickie Fowler.

“Last year, there wasn’t much practise. I just couldn’t do it with my knee. I couldn’t get on my left side,” said the Florida State University graduate.

“Couldn’t squat down in a bunker. I struggled to get down and read a putt. Thankfully that’s in the past now.

“When you have something taken away from you, I think it makes you appreciate it more,” said Koepka, who has questioned how much respect he was shown after a run that saw him win four majors in just eight tournaments played.

While he admitted his left knee may not be as good as his right for some time still, he is raring to go having only been given the green light to hit balls just before Christmas.

“Even when I got the green light, I just didn’t know whether it was going to feel right – whether you’re going to be the same, how is it going to feel.

“I missed showing up to an event, preparing for something, because I haven’t had anything to prepare for. Having three months off, it’s not fun.”

This week’s event sees the European Tour’s new tougher regulations aimed at tackling slow play come into effect including a key revision to the four-point plan previously announced in August.

Koepka was an outspoken critic of J B Holmes in particular at Riveria, last year, after the pair went head to head in the Sunday shootout, which Holmes won.

“I think it’s a good thing,” he said about the new four-point plan, which will target the “worst offenders” in terms of slow play.

“I think the game’s changing and I think the rules need to kind of change with it.

“It’s got to evolve as we evolve, the courses evolve and technology, everything like that.

“They are trying to make the game a lot simpler. We’re on our way to making it easier to understand for the fans at home, the players.

The Florida ace, who won both the US Open and USPGA back-to-back in 2018 and 2019 respectively, is joined in the field by compatriots Bryson DeChambeau and Patrick Cantlay.

He is also targeting a maiden Rolex Series victory this week, and “The Scientist” has form in the desert after capturing his first European Tour win in Dubai last season.

DeChambeau, who has been criticised for taking too long with his very methodical pre-shot routines, is focusing on adding to his sole European Tour win in Dubai, in 2019.

“For me, having this be a Rolex Series event and having it be this important, it’s fantastic,” said DeChambeau who won four times in the States in 2018, and has recently bulked up his physique.

“Every tournament I play in, I still go in with the mind-set that I’m going to win and do my absolute best to win.

“It’s a great preparation for the rest of the year. It’s going to tell me what’s going right and what’s going wrong, and I’m going to try to bring my ‘A-game’ to every single event that I play.

“Playing globally, being a part of global golf, is definitely on my list. I want to be able to say that I can win worldwide, which I’ve done.

“Now I won last year in Dubai. I want to win multiple times, and I also want to grow the game globally.”

MEANWHILE, World No. 6 Patrick Cantlay is competing in his first European Tour event outside of the Majors and World Golf Championships.

The University of California Los Angeles (UCLA) graduate is also keen to build his reputation as a global player with victory in Abu Dhabi.P

Cantlay, who made his debut in America’s Presidents Cup win against Ernie Els’ International team, at Royal Melbourne, in December said: “I think it’s important to play all over the world, not only just for growing-the-game purposes.

“But I think it’s good as a golfer to see different places and get comfortable playing all over. I think that’s part of it.

“The European Tour and the PGA Tour play more of a global schedule, especially in the last decade,” added the two-time PGA Tour winner.

“I don’t think that’s going to change. I think it will continue to be more of a global game, and we see that with the World Golf Championships,” said Cantlay.

“I think it’s all good, and it’s good to play in different places and experience different cultures and see what the world is like.

“I talked to Rickie Fowler. He said he enjoyed his time here. Obviously he won – he told me how great a list of champions this place had, kind of needling me a little bit.

“I’ve heard a lot of great things about the event,” added the 27-year-old, who was on the losing USA team against Great Britain and Ireland in the 2011 Walker Cup.

Cantlay lost both his singles matches to Scotland’s Michael Stewart and Ireland’s Paul Cutler but beat Wentworth’s Steve Brown, the recent winner of the Portugal Masters, in the Saturday foursomes at Royal Aberdeen.

But his Presidents Cup debut will be more memorable after the rookie claimed three points in his five matches as the USA won 16-14 after a fightback in the Sunday singles.

•For first round tee times in the Abu Dhabi HSBC Championship click here.