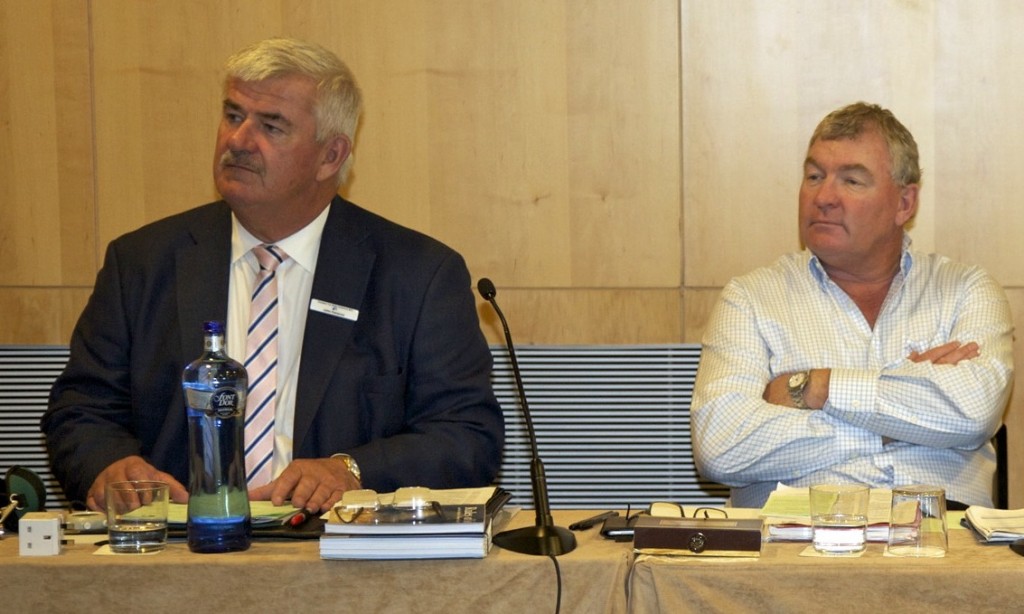 European Tour chief referee John Paramor (left) and Andy McFee who led the trials of the new pace of play timing system at the BMW PGA Championship at Wentworth, in September

EUROPEAN Tour players who record two bad times in a tournament – instead of in the same round – will now face an immediate one-stroke penalty, tournament chiefs announced today.

The beefed-up four-point plan – announced back in August – will see the worst offenders on slow play targeted by referees and hit by penalty which will affect them immediately – not with a fine implemented after the event.

But players on the clock will get a “time out” which will allow them to notify the referee they wish to take an extra 40 seconds because of the difficulty – or special circumstances – for a particular shot.

If they are the first player to play in a group that is officially “on the clock” they will get an extra 10 seconds to play their shot, and could still request the extra 40 seconds by using the time out.

But any player wanting to use the extra time must clearly signal their intention to a referee before the initial 40-second allowance runs out.

And they can only apply the time extension to one shot in any one round of golf, the European Tour said this week.

A reduction in the time allowance for “in-position players” to play shots also comes into force this week – alongside increased fines for players who are regularly placed “on the clock” throughout the season.

The fines start at €3,500 for their first bad timing offence after their first official warning in any one season – and they rise incrementally for each subsequent offence, the European Tour has warned.

Further fines exist, depending on the number of times in total each season a player is “put on the clock.”

European Tour players have also been required to undertake an education programme since the four-point plan was announced last year.

“Changing the regulation for an immediate one-shot penalty to now be triggered by two bad times in a tournament – instead of a round – will force slower players to consistently ensure they play within timing regulations.

“This is part of our wider, robust policy to tackle slow play but our fundamental advice to all players remains consistent – they should be ready to play when it is their turn.”

The European Tour’s four-point plan, announced back in August, continues to put the European Tour at the forefront of pace of play management in the professional game.

It was introduced following a mandate from the European Tour Tournament Committee to take firmer action against slower players. 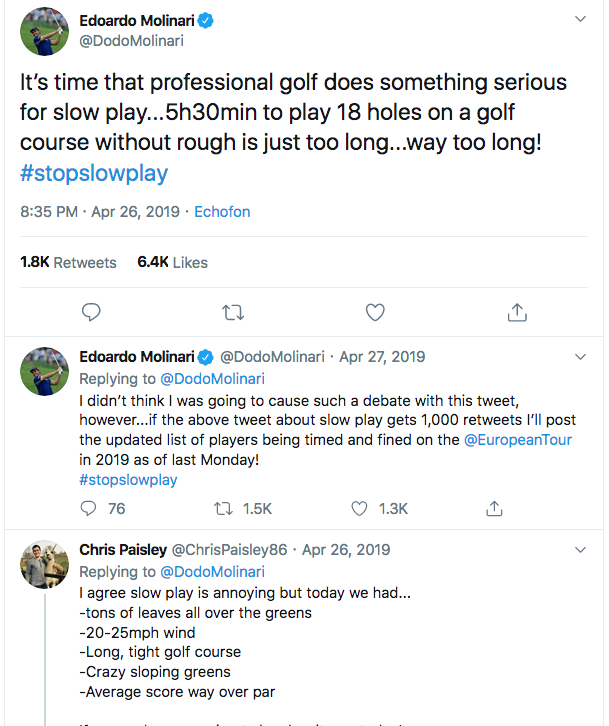 Edoardo Molinari caused a storm on social media by shaming the players dubbed the slowest on Tour by releasing a list of fines for slow play, which started a wider debate.

A new ‘pace of play’ timing system utilising the latest technology was tested at the BMW PGA Championship, at Wentworth, in September, with a further trial taking place in Abu Dhabi this week.

The intention is to roll the system out across a number of events in 2020, providing referees with the precise times for every group through every hole to make sure that no gaps are missed.

On-tee displays linked to the system will also provide the players instantaneous information on their position in relation to the group in front to try to avoid the chances of a one-stroke penalty being dished out.

Field sizes at fully sanctioned events will be reduced from 156 to a minimum of 144 – so long as all entered players in Category 18 (the final 116-132 on the 2019 Race to Dubai) and above make it into the tournament.

The last point will create space for referees to push groups over the Thursday and Friday rounds, while larger starting intervals will be built into play on Saturday and Sunday to create a better flow between groups.

OVERVIEW OF TIMING ALLOWANCES
Out of position
When players are out of position their time allowance is 50 seconds* for the first to play, 40 seconds* for second or third to play. A one-shot penalty will be applied after two bad times in the tournament.

In Position
The time allowed to play a shot when being monitored in position (previously double the out-of-position times above), will be reduced by 15 per cent, from 100 and 80 seconds down to 85 and 70 seconds respectively for first and second/third to play. Referees have been told to be proactive in targeting regular slow players for in-position timing.

*The existing principle of allowing an extra 10 per cent on the 40 and 50 second limits will be maintained by referees, recognising human differences can occur in starting timing. A player will be assessed a “bad time” if he has a third time after the 10 per cent allowance.

It’s Back to the Future as Kristianstads hosts first LET Swedish event in five years
After missing Presidents Cup with knee injury, Koepka’s keen to play in Abu Dhabi