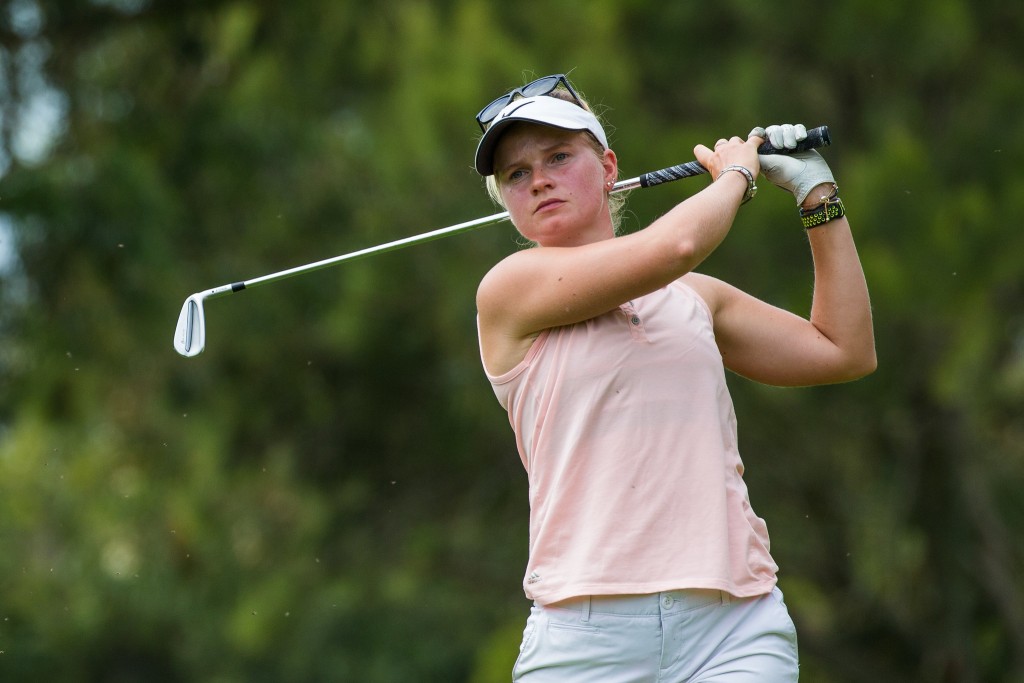 Ferndown’s Hayley Davis can’t wait to get started playing again – the 2019 LET Access winner will tee it up in the Rose Ladies Series at Brokenhurst Manor GC, on Thursday.
Picture by TRISTAN JONES

DORSET’S Hayley Davis could not wait for the Rose Ladies Series to get under way today at Brokenhurst Manor.

Davis described the one-day tournaments for women professionals in the UK as “everything” as she prepared to make her return to competitive golf at the New Forest club.

Hayley is poised to tee it up in the first of seven rounds over the next month – plus the recently announced Tour Championship final at Wentworth.

Also in the field are Solheim Cup stars Charley Hull, from Woburn, and recent rookie winner Alice Hewson, from Hertfordshire, who won her first start on the LET in South Africa, in March.

The series has been sponsored by Hampshire’s US Open winner and Olympic gold medallist Justin Rose and his wife Kate.

Ferndown’s Davis earned her place on the Ladies European Tour for 2020, after winning the LET Access Series Order of Merit crown last year.

But with the LET schedule wiped out by the coronavirus pandemic, the 27-year-old is champing at the bit for a chance to compete in the newly-formed UK series.

Asked what Rose’s sponsorship meant for the women’s game, Davis said: “It’s everything. Just that the men understand how it is for the women – and the fact he wanted to do it – means a lot.

“For us, we do just want the chance to go out there and compete again.

“So, the fact we have been given the opportunity, it’s just exciting and amazing that he wanted to do it. It was really good.

“At the end of the day, we are all sports people. We all just want the opportunity to compete.

“There’s a lot of people behind it that want women to have the recognition, because it’s quite big that we are starting to compete before a lot of other sports have been able to.

“It’s just really nice that he wants to do it and understands that we need the opportunity.” 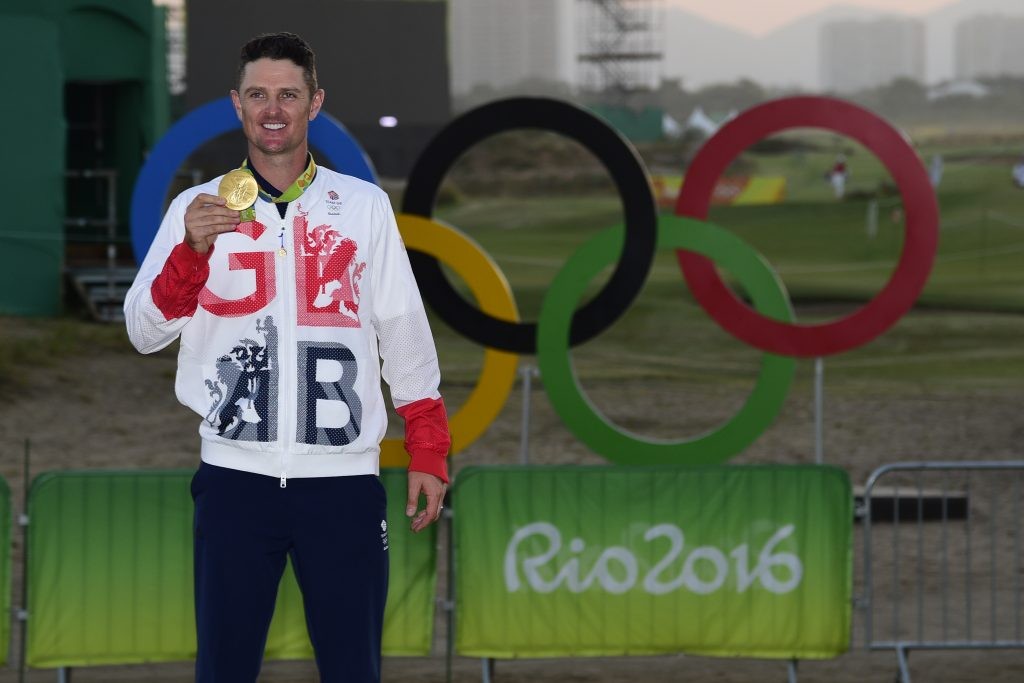 Justin Rose after winning the Gold Medal at the 2016 Olympic Games in Rio.
Picture by CHRIS CONDON / International Golf Federation

Rose: I had to help women’s game

FORMER World No. 1 Rose, who grew up playing junior golf for Hampshire, was determined to give the women’s game a lift.

Just days after missing out on a play-off at Colonial by a ball’s width with his final putt of the tournament in Texas, the new series bearing his name tees off in Hampshire.

Justin, who watched Florida’s Daniel Berger beat Colin Morikawa in a play–off in the first PGA Tour event in three months on Sunday, said: “I am keenly aware that I now have the opportunity to go back to work and compete on the PGA Tour.

“But this is not the same for the ladies and some junior tours as well.

“To me this seems somewhat unfair. My wife Kate and I felt there was an opportunity to step up and help. 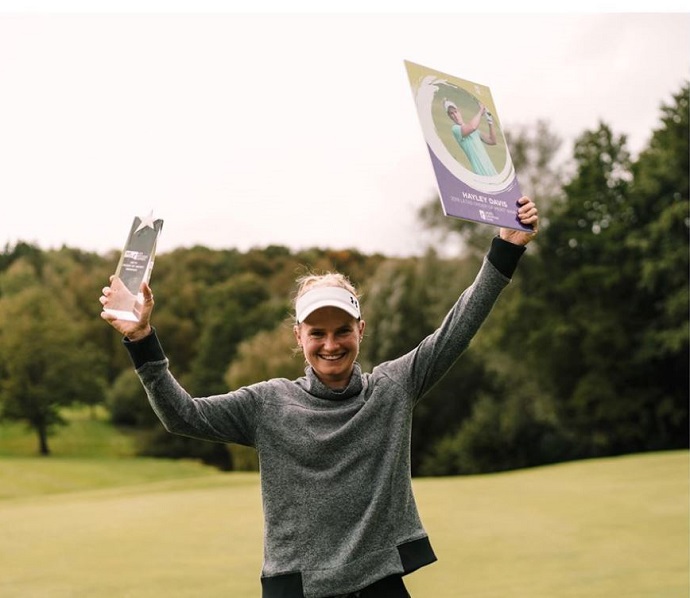 Last year’s LET Access Series winner Hayley Davis had to wait patiently for starts on the tour in 2020 – only for the COVID-19 crisis to interrupt her season. Picture by MANON GUENOT

Davis and Young to tee off in first group

HAYLEY Davis is set to tee off in the opening group at 10.30am alongside Brokenhurst professional Liz Young.

The LET ace came up with the idea of the Brokenhurst Manor Women’s Open earlier this month – before Rose offered to back a whole series of events as the idea snowballed.

“I am just really excited to be able to go and do it again because it’s been a long break,” Davis said.

“Nobody really knew how long it was going to go on for,” added Davis, referring to COVID-19 lockdown.

“That was probably the hardest thing – just to keep yourself motivated, keep going practice-wise and stuff.

“You had to get the net in the garden and try to keep in the swing of it as much as you could – and just wait to find out when we could get back to it.

“It will be really good to have a chance to compete once a week. It will make us more ready to go, hopefully when we do finally get started,” talking about the LET’s return.

The visit to Brokenhurst will also mark a trip down memory lane for the former Dorset Ladies Champion, who turned pro in 2015.

The Baylor University graduate said: “I went to college there for two years a while ago now. So I got to play there a lot. It’s really nice that the first one is close to home.

“I haven’t played there for about nine years I think, so it will be good to go back there.” 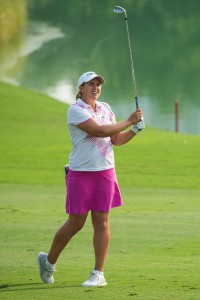 HAYLEY Davis shares something in common with Liz Young – they have both won the English Ladies Amateur Strokeplay title.

Davis picked up the trophy at Tandridge in Surrey, in 2014 – eight years after Young – as Liz Bennett – claimed victory at Birmingham’s Little Aston.

Charley Hull is another former English Strokeplay winner in the field, having won at Alwoodley, in Leeds, in 2011.

Rose is another with links to the classic Harry Colt course in the New Forest.

A then teenage member at North Hants GC won the Mike Smith Memorial Trophy in 1996.

In the process, he set the course record at Brokenhurst Manor – the year he helped Hampshire win the English County Championship for the first time.