By Andrew Griffin on 2nd February 2020 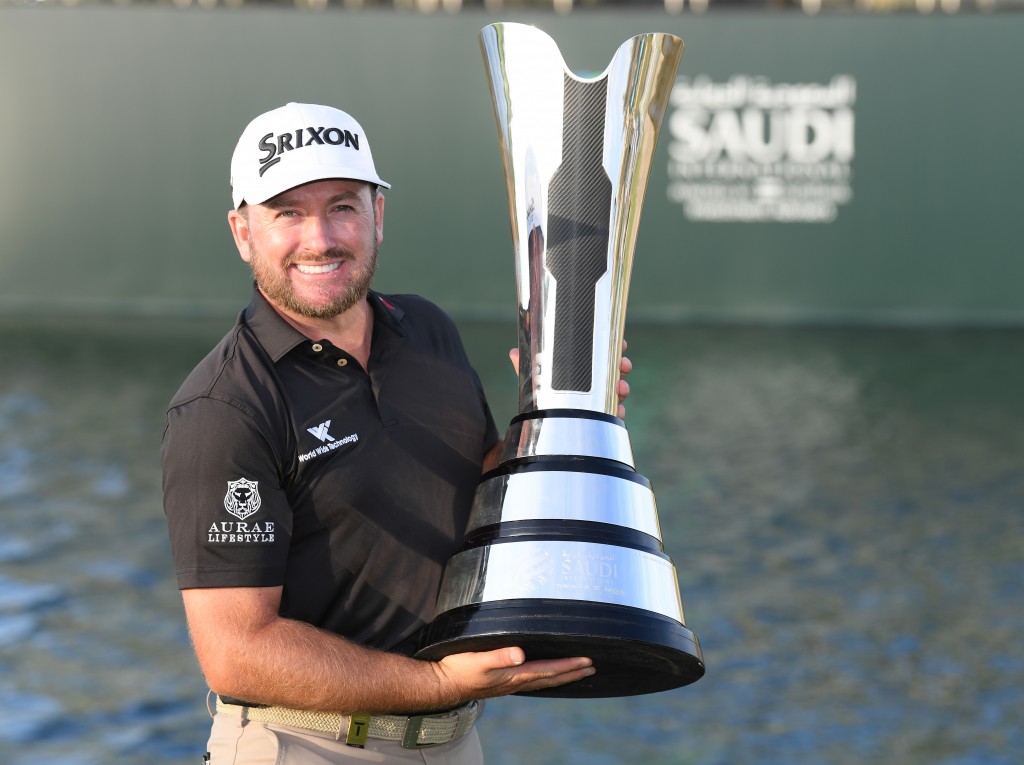 Graeme McDowell claimed is 11th European Tour victory with a two-shot win over Dustin Johnson the defending champion in the Saudi International. Picture by GETTY IMAGES

GRAEME McDowell showed the kind of determination which helped GMac become a Major Champion as he claimed his first European Tour win in six years at the second Saudi International.

The Northern Irelander, who grew up playing links golf at Portrush, battled to a final round 70 to pick up a cheque for €529,337 – and a victory that propelled him back into the top 50 of the Official World Golf Rankings.

McDowell, who won in the Dominican Republic on the PGA Tour last year – having languished as far down as 238th on the OWGR at the end of 2018 – finished on 12-under par at Royal Greens Golf & Country Club.

That was two shots clear of defending champion Dustin Johnson, and good enought to claim his 11th European Tour title – and first since the 2014 Open de France – a wait of 2,037 days.

An emotional McDowell, who is now ranked 47th in the world, said: “I didn’t realise it had been quite that long since I’d won here in Europe.

“I’m very excited. I’m very relieved. This is a difficult golf course,” said the former Rathmore Golf Club junior, who won six times in his final year at the University of Alabama, back in 2002.

The player known as GMac around the world added: “It’s unusual to win feeling as uncomfortable as I did on a lot of these holes because it was a tough golf course these last two days, especially with tough conditions.

“The birdies on 14 and 15 were just huge at the time, and it was nice to have a that little cushion coming down the last couple.

“My big goal this year was to be back in the Top 50 in the world, back competing in the big tournaments,” said McDowell, who was last guaranteed starts in the four Majors, back in 2015 at the US Open.

“I’m very excited that it’s happened a little faster than I expected, but hopefully it’s laying some foundations down for having a big year,” said the European player, who holed the winning putt in the 2010 Ryder Cup, at Celtic Manor.

“I really feel like I’m moving in the right direction, and it’s weeks like this that really give that you which I can additional effect and hopefully I can use it,” added McDowell, who was captured on TV calling his children as he walked to the scorer’s hut after holing the winning putt in Saudi.

“It’s been 10 years since I won a US Open, 10 years probably since I played the best golf of my life.

“Kenny on the bag there – I have a solid team. Life’s settled down. I’ve got a great wife and great family.

“I’m very happy with what’s going on in my life right now. I feel like the pond, the ripples in the pond have kind of steadied out a little bit now, and I’m in a good place to play some good golf.”

And while McDowell admits wanting to impress his young children is a major motivation for his charge back up the world rankings, he acknowledged competing on Tour today takes even more than it did at his peak a decade ago.

Graeme, who began the week at 104th in the OWGR, said: “There’s so many great players in the world now.

“I’ve got young kids at home, and I want them to see me out there. I want to show them that dad’s tough. Dad can still do it.

“I didn’t want them to have to pull up YouTube videos,” said GMac.

“I’m really happy with the direction I’m moving with my game. Massive to have weeks like this.” 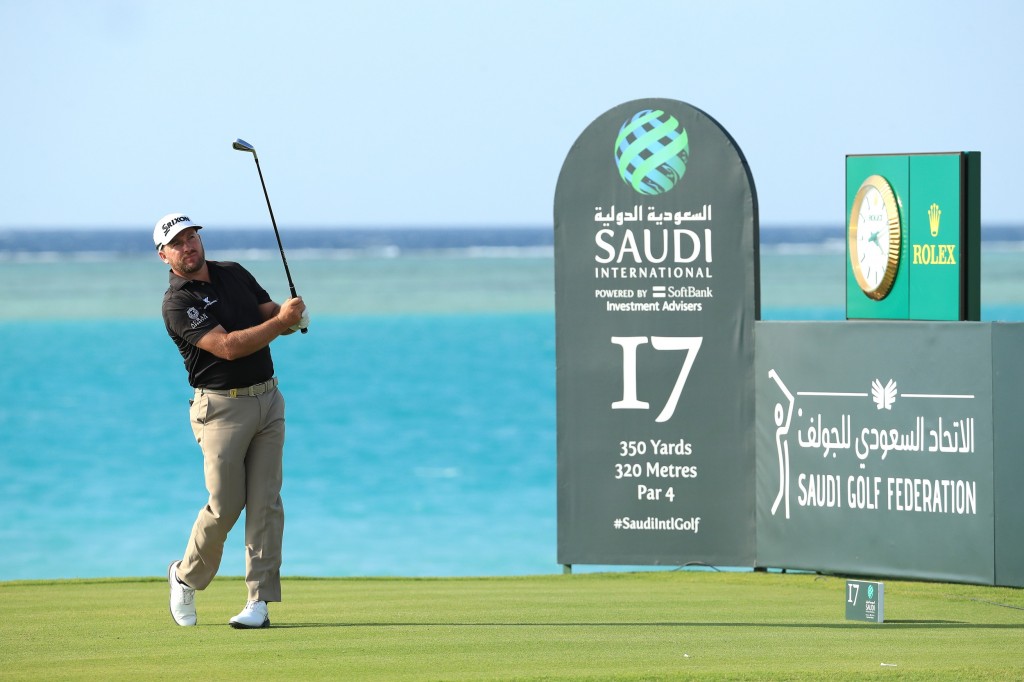 Graeme McDowell tees off on the 17th hole on his way to victory in the Saudi International at Royal Greens Golf and Country Club. Picture by GETTY IMAGES

FORTY-year-old McDowell, who won the 2010 US Open, at Pebble Beach, held a one-shot overnight lead over his 2014 Ryder Cup partner Victor Dubuission going into Sunday’s final round.

But GMac bogeyed the opening hole, and after a scrappy front nine the pair reached the turn tied at the top of the leaderboard.

McDowell birdied the eight hole and bogeyed the ninth, while Dubuisson birdied the third and fifth, but dropped shots at the fourth and sixth.

Frenchman Dubuisson could not mount a challenge after the turn though, carding a four-over par back nine of 39 in his round of 74 – to finish tied sixth on seven-under.

Instead, the main threat came from inaugural Saudi International winner Johnson, who eagled the final hole for a round of 67 to post the clubhouse target of 10-under, while Belgian Thomas Pieters signed for a 65 and a nine-under total earlier, after missing eagle attempt on the last.

McDowell bounced back from a bogey on 13th hole with back-to-back birdies on the 14th and 15th holes.

The four-time Ryder Cup player took a two-shot lead down the last and despite leaving his third shot short of the green from a greenside bunker, he made par to claim a memorable victory.

He became the second Ryder Cup player in his 40s to win during the Middle East swing after Lee Westwood’s Rolex Series victory in the Abu Dhabi HSBC Championship two weeks ago.

And thankfully, the controversy of Friday’s second round, when GMac was given a formal slow play warning after taking part in an on-course interview with Sky Sports’ Tim Barter – a second slow time would have cost him an automatic one-shot penalty under the European Tour’s new policy – did not come back to haunt him over the weekend.

Johnson finished runner-up while Pieters shared third place with five-time Major champion Phil Mickelson, who closed with a 67 and Malaysia’s Gavin Green, who had been second with 36 holes to play, having shared the first-round lead with McDowell.

But the former World No. 1 admitted he could have pushed GMac harder in his defence of the Saudi crown.

Johnson, who won the US Open in 2016, said: “It was another day where it could have been a lot better. I’m happy with the way I’m playing.

“It was difficult to putt, though. It was really hard to make putts. I hit a lot of really good shots, and really good chances for birdie.

“You know, when you’ve got a left-to-right slope and you’re playing it outside the right, it’s tough.

“I was still missing them left. It was just hard to judge how much the wind was actually going to move the ball.

“I’m pleased with the way I played, but I would have liked to give Graeme a little more pressure coming down the stretch.

“I had all the chances, but I did finally make a nice putt on 18 to finish.”

•For full results at the Saudi International click here.