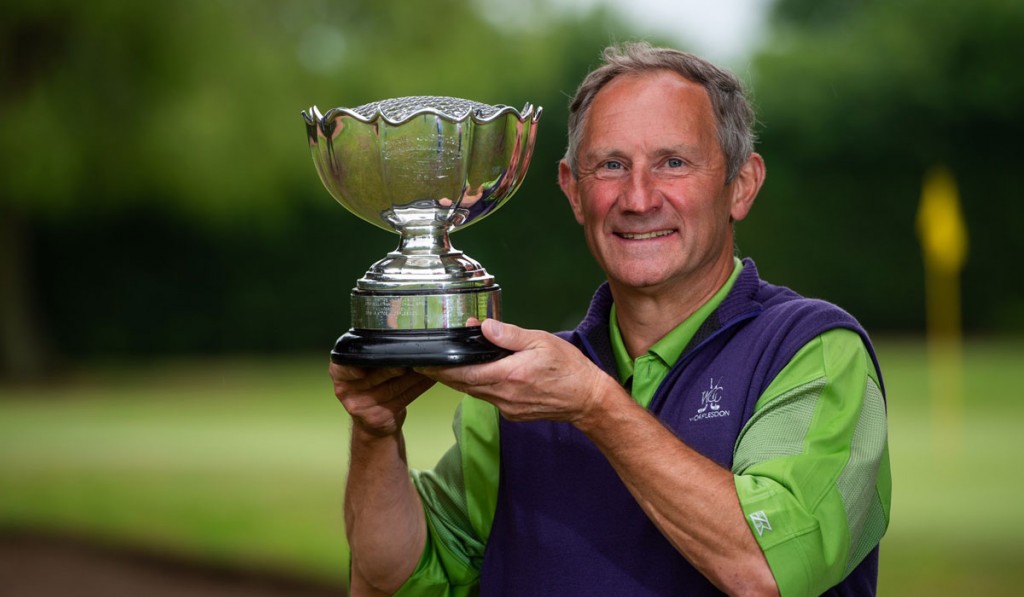 He was nine-under par for the 54 holes and his win gave him his third championship title since 2015. The runner-up was Yorkshireman Richard Norton while third place went to Tim Whittaker from Beaconsfield in BB&O.

In the process, Attoe became just the fourth player to successfully defend England’s Over 55s title in 39 years – joining Alan Squires, Roy Smethurst, and Sussex’s Doug Arnold in achieving the feat – although Smethurst, from Cheshire’s Crewe GC, is the only player to  have done it twice, in 2004/5 and 2000/1.

Lancastrian Squires, from Saddleworth is the only player to have won the trophy three years in a row since the competition was founded in 1981. Smethurst has the most wins – four in that period – while Attoe joins Sonning Common’s David Lane, Squires, Arnold, and Cheshire’s G M Edwards all have three each.

Attoe, from Surrey’s Worplesdon GC, said: “The wins are all equally good, but this is the most satisfying at the moment because I kept going forward in the competition and I was really pleased with the quality of golf throughout the three days.”

He started with six-under 65 at Holme Hall, added one-over 72 at the companion cub, Elsham, and finished off today at Holme Hall with four under 67.

When he set off on Friday he led by three from playing companions Richard Norton, a member at Beverley & East Riding, and another Yorkshireman, Ian Clarke, from Lindrick.

Almost immediately the lead was cut to one when Attoe parred the first hole while Clarke chipped in for an eagle two – and Norton birdied it.

“It was a bit of a wake-up call,” said Attoe. “I thought I had played the hole well but I lost ground to both of them! But my putter worked very well and I holed long putts for birdie on the next three holes.”

He couldn’t relax, though, because Norton was also notching up the birdies. However, Attoe had a two shot cushion after the fifth, when he got away with a bogey to his rival’s double.

The seventh set him firmly on the path to victory when he played a difficult shot from the back of a fairway bunker – and then sank the 60ft putt for birdie.

“That really was a turning point, I think then I knew it was going to be my day,” said Attoe, who admits to being superstitious and was sporting the same green shirt that he wore for last year’s win.

His other shot of the day was the six-iron into the 16th which finished 10ft away and set up another birdie, his seventh of the day.

For Attoe, there’s the additional satisfaction of claiming a place in the England senior men’s team.

Attoe added: “That’s my annual ambition and about half way through the round I knew I was going to be in the top three and hopefully gaining enough points to play for England.”

The leaders played much of the final round in wet and windy weather, but the conditions did not deter a good crowd of spectators who enjoyed the fine golf. “I don’t think I’ve seen that many people before and it was lovely to have so many people – friends and golfing acquaintances – wishing me well.”

Attoe was also complimentary about the host clubs, Holme Hall and Elsham. “The clubs have been so welcoming and both courses have been superb. I only had one three putt in three rounds of golf,” Attoe said.