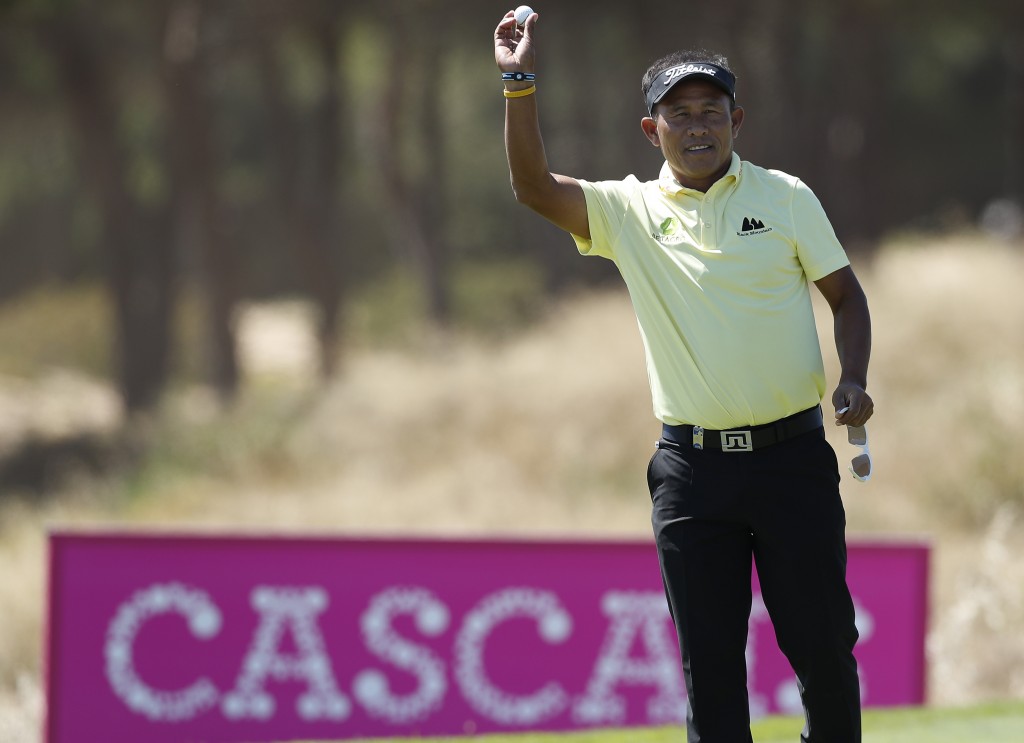 Thailand’s Thongjai Jaidee who hit a hole-in-one to beat Ireland and put his country through to the knockout phase of the GolfSixes at Cascais’ Oitavos Dunes.

THONGJAI Jaidee sank a hole-in-one in front of a swimming pool to close out Team Thailand’s closing victory over defending champions Team Ireland and progress to the knockout stages of GolfSixes Cascais, as the innovative event teed off with a bang in Portugal.

It was an engrossing start to the six-hole tournament at Oitavos Dunes, where the in-form Spanish duo of Jorge Campillo and Nacho Elvira were the best performers with two wins and a draw – a total of seven points meaning they topped Group D in the round-robin stage.

Two former Ryder Cup winners will also play in the knockout stages, with Stephen Gallacher making it through alongside fellow Scot David Law while Italian Edoardo Molinari qualified alongside his team-mate Lorenzo Gagli. Sweden and Australia were the two other group runners-up to progress.

While an ace from the eight-time European Tour winner Jaidee was one of the many highlights for the fans surrounding the sixth and final tee – located in a bar and lounge area overlooking a swimming pool – the crowds were also witness to an exciting and rare play-off scenario between Australia and Germany Women.

The two teams faced each other in a play-off on the sixth hole after tying on points at the conclusion of all three group matches and, after they could not determine a winner on the first time of trying, they returned to the tee for a closest-to-the-hole decider.

Scott Hend’s tee shot was just less that two feet closer to the hole than Laura Fuenfstueck’s strike and Australia qualified for the final day.

“I’m very proud of myself, for my team, as well – I played with Phachara (Khongwatmai) today. I don’t know, I have perfect shot. That’s the main thing, it was the correct club and that is more important. But it can be happen that way, just lucky. I had good tee shot, anyway, but finally we got the points.

“I’m very excited to be in the tournament. Finally we go through, as well, and that’s the main thing we had to do. If my team wins the tournament, I’m going to jump in the pool!”

“We played well all day, very solid tee to green. We made a couple of silly mistakes in the second game and the third was a little bit easier, but the end of the day, you just want to play tomorrow and that’s what we did today.

“It’s quite windy. I think it’s a good six holes because it’s a bit of everything. If you drive it well, you can be aggressive off the tee and that’s what we did today. We had a lot of chance for birdies, and we just have to I think stay aggressive and make a few birdies here. Whoever is not going to make mistakes and probably going to win.”

“My Putter got hot which was nice, we were discussing in the last few holes that you’ve just got to get off to such a fast start. I feel like we did that, we holes some putts and we’ve teamed together quite well so far so we’re made up that we got through and hopefully we can carry that into the final stages.

“I’ve tended to hit iron first and then Tom can be a bit more aggressive with driver but I don’t know if we’re better off both being aggressive with driver and just trying to force birdie – but saying that we made birdie from way back on the fairway a few times today and then made bogey from 50 yards! But you just have to get off to a good start early and be aggressive.”

“It was good today. We played good golf. Hit good irons into the green. Nacho hit great irons and I made some great putts, so it was a great day.

“It was a great day. Normally I don’t smile too much playing golf, but I did a bit today. It was fun and we go on, so even better.”

“We were down early in the first match and in this kind of format, it’s only six holes.  It’s like you’re on the 16th hole and you are two‑down with two holes ago, and we were able to scramble a halve at the end, which was huge.

“I think we might have started maybe more aggressively in the first match to get quickly under par … and we were down two, and realised how we needed to approach it for game two and three.”

“It’s one of these formats, if the team you’re playing against birdies the first three, you’re almost done. It’s just a case to try and get off to a good start. We knew it comes down to points scored, so we were trying to win every hole coming in. We gave it our best. We’re through and we’re happy with that.

“You’ve got to keep on top of it. But as I say, it’s more important to get off to a good start, and yeh, you’re nervous. But that’s what you want, when you’re representing your country, you don’t do it very often.”

Pelley questions if it is time for an innovation swing?
Attoe becomes fourth player to win English Seniors back-to-back