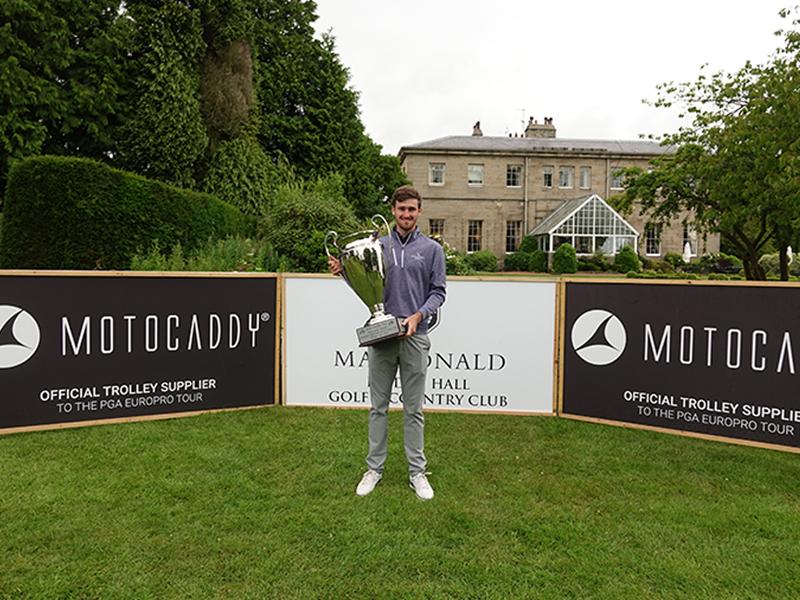 DARLINGTON’S Andrew Wilson claimed The Motocaddy Masters days after clinching a place at The 146th Open later this month.

Wilson, who is attached to Rockliffe Hall, knew a good round would put him in the mix and posted his second 67 of the week to go five-under for the day to win by one shot.

It was some week for Wilson after playing two rounds of enduring Open qualifying on Tuesday at Notts GC’s Hollinwell. Wilson played his third round of the week at lunchtime on Wednesday in his opening round at Macdonald Linden Hall where he shot five-under.

“I played here on Sunday for practice then practice round on Monday for Open qualifying, then two rounds on Tuesday –  I don’t know many rounds of golf I’ve had over the last two weeks,” added Wilson, who played at Dudsbury in the EuroPro event as well as the first round of Open Qualifying.

“I didn’t expect to be up there to be honest. I struggled a bit on Thursday. I just sort of held it and my caddy did a really good job.”

He went out in his last round with six birdies and only one bogey to put himself right into contention. Something that seemed unlikely at the start of play.

It wasn’t to be for Richard Mansell, from Beau Desert Golf Club, and Chelmsford’s James Allan, who both ran Wilson close at the end with Mansell finding the water on 18 and Allan going close with a putt that would have tied the former England amateur international and forced a play-off.

Elsewhere, it was nearly the case of deja vu for Kent’s Alfie Plant, who was leading by two shots at one stage on 10-under, as the 2017 European Amateur Champion looked to win back-to-back for the first time in the pro ranks, after his win in The Golfcatcher Championship at Dudsbury, a week earlier.

The Sundridge Park ace, finished tied for second having got to four-under at the turn in his third round, only for the birdies to dry up, and a solitary bogey at the 14th to leave him one shot shy.

Amateur Matty Lamb, from Hexham Golf Club, gave a good account for himself on the last day carding a level-par 72 to tie for eighth with Falkirk’s Ryan Campbell, Shropshire’s Will Enefer (Retail Furniture) and Tom Gandy, from Rowany  GC on the Isle of Man.

Wilson is taking the week off as the EuroPro heads to the Macdonald Portal Hotel, Golf and Spa, in Cheshire, for The Cobra Puma NXT LVL Championship, which takes place from July 10-12.

Cobra Puma Golf – who signed a three-year extension to its deal as official equipment, apparel and footwear sponsors of the PGA EuroPro Tour – is following the progress of the ‘NXT LVL’ academy through the 2019 season on social media.

The selected players are eligible for the Cobra Puma Golf Order of merit running alongside the main PGA EuroPro Tour moneylist.

There is a low round bonus, plus five Challenge Tour starts in 2020 up for grabs with Nial Horan’s Modest! Golf management firm having agreed to be partner of the Cobra Puma Golf order of merit.

Cobra Puma Golf marketing manager Craig Verrinder said: “We are extremely excited about the opportunity to work closely with the future talent in the game.

“The EuroPro Tour really is the springboard to the best platforms in the game, and to work with these players in 2019 is a really exciting prospect. To be able to support them further with product, additional bonuses and work through our social media channels is testament of what we think of the players and the tour itself.”

He added: “Further to that, to be able to work with Modest! Golf on the Cobra Puma Golf Order of Merit enables us to use their standing within the game to offer the Challenge Tour invites in the 2020 season.

“We value its support and also how it perceives the future of golf. We would like to take this opportunity to thank both Modest! and the European Challenge Tour in the support they have shown this NXT LVL of players.”

Modest! Golf Management director Mark McDonnell said: ”We are really excited to support Cobra Puma Golf with this initiative. We appreciate that support is hard to come by for a large amount of really talented young golfers looking to make their way in the game.

“The Cobra Puma Golf NXT LVL Academy will give young talented players the support and belief at a point when they most need it.”

Niall Horan, founder and director of Modest! Golf, added: “Our company is all about supporting young talent. The NXT LVL Academy does exactly that, and we are delighted to be able to provide some playing opportunities and hope this will add as an additional incentive for the NXT LVL members.”

John Jacobs Trophy winner Dennis hopes to have it in the bag again at Bad Ragaz
Rahm: Time for a third Rolex win as superb 62 lights up Lahinch to take Irish Open