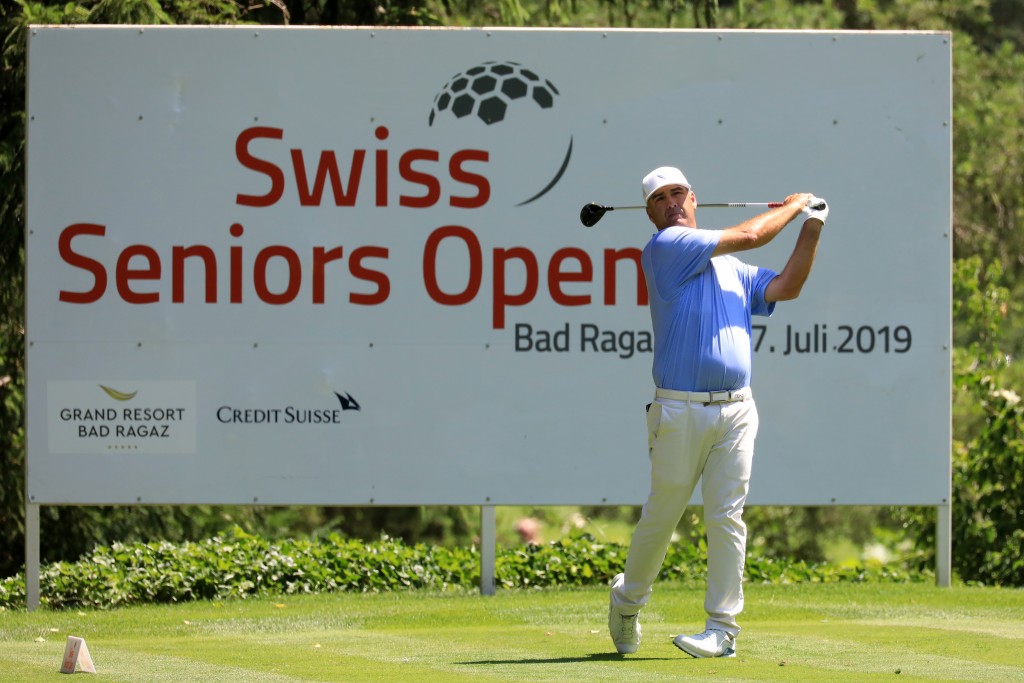 Texan Clark Dennis shot to the top of the leaderboard in the Swiss Seniors Open at Bad Ragaz. Picture by GETTY IMAGES

CLARK Dennis carded three birdies in his final four holes to post a six-under par 64 and race to the top of the Swiss Seniors Open leaderboard at Golf Club Bad Ragaz.

The 2017 John Jacobs Trophy winner started and finished strongly in the Swiss mountains to take a one-stroke lead into the weekend ahead of Mark Mouland and José Coceres after Friday’s first round.

Dennis, a four-time Staysure Tour winner, teed it up in Switzerland with his son Philip on the bag, as he was for his most recent victory on the over-50s circuit, the MCB Tour Championship – Mauritius in 2018.

“He’s a tour-winning caddy from Mauritius! He’s my good luck charm,” Dennis said. “Having him and my wife here is great and my other son is coming to Spain next week.

“It’s great to have them here during the summer in Europe. They get to see some great stuff and experience great places. The Staysure Tour has been a blessing for my family.

“I really enjoy playing on this tour, everything is run so well. We play really nice courses like this and it’s pretty relaxed. There are a lot of good guys out here.”

The Texan carded six birdies and a hole-out eagle during his opening round but his leaderboard-topping 64 was tinged with a hint of frustration after missing short putts which would’ve extended his advantage further.

“I missed a couple of short putts but other than that, it was a flawless round,” Dennis said. “I hit it really well and only missed one green.

“If you’re driving the fairway here, you’re going to get a lot of birdie opportunities and fortunately I was able to convert eight times – well, six times, I holed out from the fairway on eight!

“It was nice not to need the putter. I’ve been struggling a little bit with my putter so it was nice to see a few go in today.

Welshman Mouland and Argentina’s Coceres both carded bogey-free, five under par rounds of 65 at Golf Club Bad Ragaz to sit in tied second, while Peter Baker, Peter O’Malley, Phillip Price and Ian Woosnam are a shot further back on four-under.

The second round will begin at 8am local time on Saturday with Dennis teeing off at 11.40am.