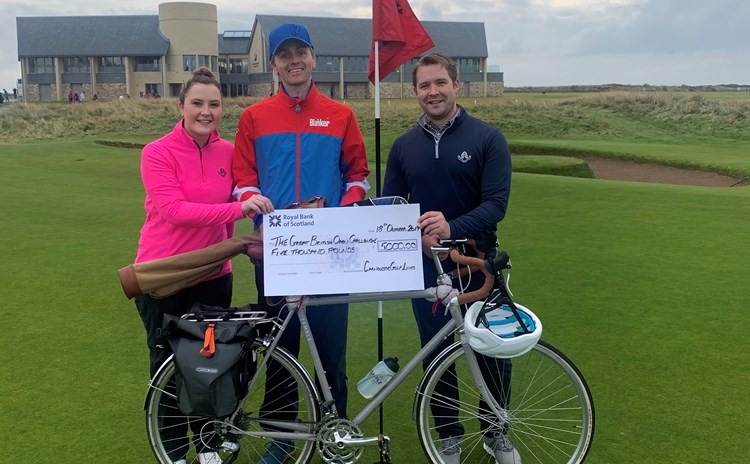 Luke Willett teeing off his Great British Open Championship Challenge – he was given £5,000 by Carnosutie Golf Links charity.

IRON Golfer Luke Willett got to grips with his latest challenge – to cycle to and play every course on The Open Championship rota, by playing Carnoustie, one of the toughest tests faced by winners of the Claret Jug.

The London-based PGA professional embarked on his unique 10-day golfing challenge at the first of the 14 Open venues by hitting his first shot in Angus, with Carnoustie Golf Links charity donating £5,000 to Luke, who is raising funds for the Golf Foundation.

It was the best possible start to his Great British Open Challenge and the Golf Foundation praised Carnoustie Golf Links for the “wonderful generosity of the Links and its staff.”

From Carnoustie, Luke headed south in the afternoon to play 18 holes on St Andrews’ Old Course – the Home of Golf.

In all weathers, Luke will face exhausting cycle rides on unfamiliar roads in darkness and in light, before playing all 14 iconic golf courses associated with The Open.

The challenge reflects Luke’s desire to encourage more young people to enjoy the thrills and adventure of golf.

The odyssey started at Carnoustie Golf Links in Scotland today (October 18) and will end in 10 days’ time at Royal St George’s Golf Club in Kent.

In between he will play three golf courses in Ayrshire, including Prestwick, the first course to stage the Open, as well as crossing over to Northern Ireland, to play Royal Portrush, which hosted the world’s oldest golf championship for the first time since 1951, to worldwide acclaim, in July.

Supported by friends of the Hertfordshire-based Golf Foundation, Luke hopes to play each 18 holes with a mix of junior players, top amateurs, professionals and club members.

Willett, who hails from Buckinghamshire, will be fundraising for the Golf Foundation as the national charity changes the lives of young people by introducing them to golf.

The charity wants to encourage them to keep playing and keep developing the skills for life that the game teaches them.

The foundation believes it will not only change the lives of thousands of young people, but will keep our game invigorated and successful.

Luke, 34, is a respected PGA coach, who has been based at Hampstead Golf Club, in North London, for the last three years.

He is a strong supporter of young golfers and has carved out a reputation for taking on remarkable ironman-style golfing tests, including once cycling over the Lakeland fells, swimming three miles of Wastwater before playing Windermere GC in a single day.

Luke said he hopes all golf-lovers who have a connection with the wider game, and who understand the need to encourage the next generation of young players, will support him through his JustGiving page.

Luke has prepared well for the challenge and will carry four golf clubs to help with weight issues on the bike.

Golf apparel brand Bunker Mentality is providing clothing to help him cope with a range of weather conditions.

“I am a great believer golf is more than just walking around a course and playing 18 holes,” said Luke at the start of his marathon.

“Adventure is waiting to be added to the whole experience either before, during or afterwards.

“I believe this challenge will help make the sport more appealing to young prospective players and will ignite their imaginations.

“I’m delighted I will be able to raise valuable funds for the Golf Foundation – we all want more young golfers in Britain and all the money I collect will go towards getting them playing the sport.”

Luke’s new challenge takes in three countries and travelling on two ferries across the Irish Sea before finally finishing at Sandwich.

Willett will play Royal Cinque Ports in Deal, which hosted the 1919 Open before making the short journey up the East Kent coast to play Prince’s which staged The Open in 1932.

He will then “pop across the fence,” to play the adjoining Royal St George’s, which hosts the 2020 Open.

Luke Willett, who will cycle more than 800 miles and play 252 holes over the next 14 days