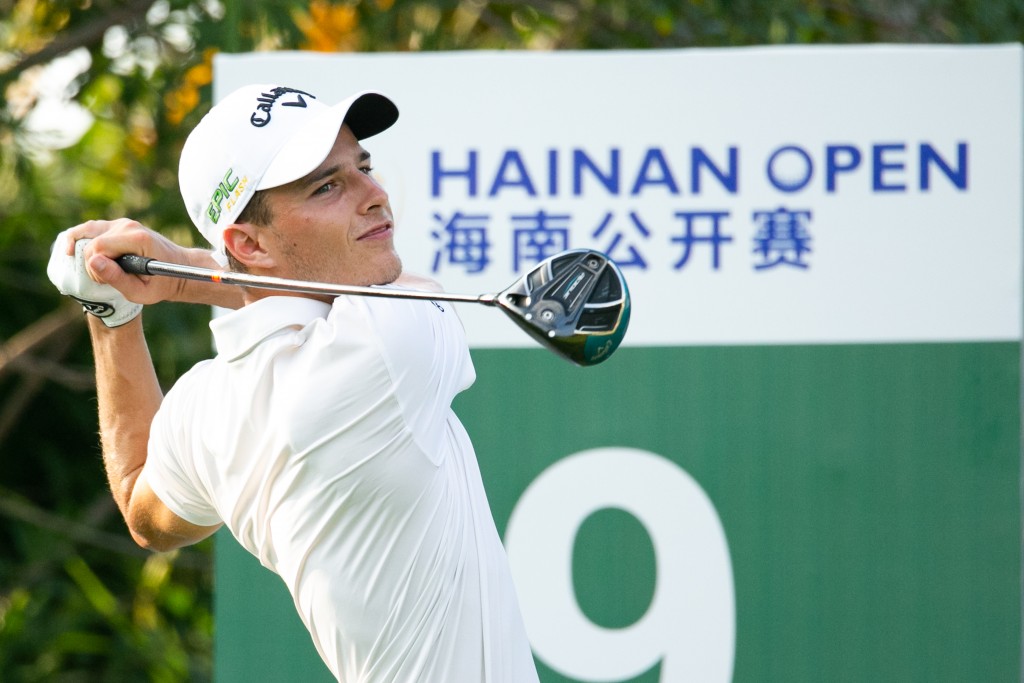 Matthew Jordan is seeking his second win on the European Challenge Tour in the Hainan Open, and is ina seven-way tie for first at the halfway point. Picture by GETTY IMAGES

Of the leaders, Liu posted the lowest round as a six-under 66 earned him a share of the lead, while Besseling and Bland posted rounds of 67.

Bland, whose only victory in more than 570 European and Challenge Tour appearances came in the Grand Final back in 2001, is looking to regain the card he lost last year.

The Stoneham GC member, who is currently third on the Road to Mallorca rankings, said: “It was another hot day. I played the back nine, which was our front nine, well and I think I turned in 32.

“I felt like I actually left a couple out there. I played a little scrappy on the back. My short game kept me going, which was nice because you need that,” said Bland, who lost a play-off in the 2002 Irish Open.

“The ninth is just playing like an absolute brute, especially with that back right flag – you’re not getting anywhere near that,” added Bland,

“It was disappointing to make five but I’m not going to lose any sleep over it – not that I’m sleeping at the minute anyway!

“I feel like I sleep great and then I look at the clock and I’ve been asleep for an hour-and-a-half.

“I haven’t been tired on the course or anything like that. I’ve been staying very hydrated. It would be nice to sleep a bit better, but hopefully that will come.

Xiao, Eom and Roussel signed for rounds of 68, while Wirral-based Jordan added a 70 to his opening 67.

Jordan, who would like to join Walker Cup team-mates Scott Gregory and Robert MacIntyre on the main tour, said: “I’ve played well. I started off the first round a bit iffy.

“I saved it a little bit in the first seven holes but from then on, from about the eighth hole yesterday, I played solid. I’ve shown positives on both days, so I’m happy.

“I didn’t think it was that different to yesterday,” added the winer of the Italian Challenge Open Eneos Motor Oil, in June.

“I did battle well actually, yesterday I just got up and down a couple more times,” said 23-year-old Jordan. “Over the two days I’ve been very solid and it doesn’t take much to pick up a shot or drop a shot.

“It’s a great event. It’s great to come to China, I’ve never been here before.

“It’s good to experience different things like the cuisine and course. The course is obviously very good. I haven’t heard one person say anything bad about it. The wind keeps it honest.”

Chinese ace Liu Yanwei said: “I had an early tee time this morning and the wind was low and then became stronger, but it was still better than yesterday.

“I didn’t play badly yesterday with seven birdies, but I got six bogeys and made some mistakes to end with a score of one-under.

“I controlled it a lot better today, with the same number of birdies, but I only bogeyed the 14th hole.”

Twenty-two year old Liu added: “I had an early tee time this morning and the wind was low and then became stronger, but it was still better than yesterday.

“I didn’t play badly yesterday with seven birdies, but I got six bogeys and made some mistakes to end with a score of one-under.

I controlled it a lot better today, with the same number of birdies, but I only bogeyed the 14th hole.

“Over the past two days, the ninth hole has caused trouble for most of us. It is 480 yards long and we had to play against the wind.

The wind direction has been basically the same since Tuesday, but it was a bit different on the seventh and eighth holes today.”

One shot further back is Frenchman Damien Perrier, Chinese duo Bai Zheng-kai and He Shaocai – who posted the low round of the day with a 65 – and Yeh Yu-Chen, from Chinese Taipei, who all share eighth place on six-under.

In total, 63 players survived the halfway cut of one-over par or lower, including the two Chinese amateurs Chen Guxin and Liu Enhua.