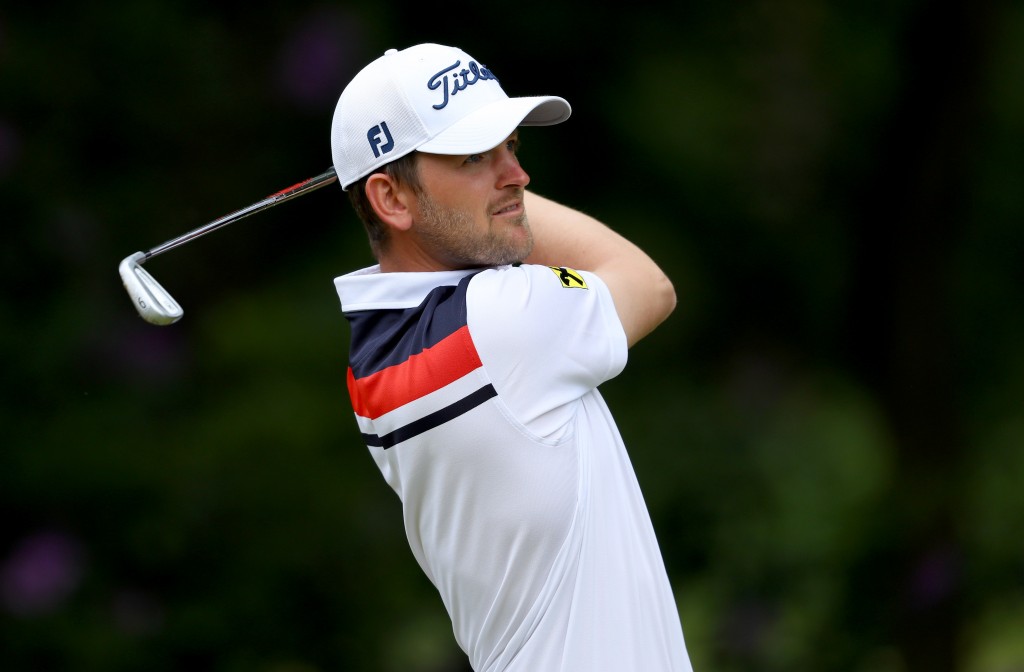 Austria’s Bernd Wiesberger only made it through to the matchplay stage of the Belgian Knockout after a superb 64 having carded a 76 in Thursday’s opening round. Picture by GETTY IMAGES

BERND Wiesberger continued his incredible comeback to advance to the quarter-finals of the Belgian Knockout at Rinkven International Golf Club.

After an opening 76 in Antwerp, the Austrian carded a 64 on day two to sneak into the medal match play stages and won three matches on Saturday as he looks for a second consecutive European Tour win.

He will face Italian Guido Migliozzi, who needed two extra holes to beat David Law in his last-16 match on Sunday morning.

In the other quarter-finals, Ewen Ferguson will face Gavin Green, Matthew Southgate will take on Darius van Driel, and Marcel Siem goes head to head with Grégory Havret.

Wiesberger missed seven months of last season with a wrist injury but if he can come through three more rounds of nine hole stroke play knockout, he will have two wins in seven days and six European Tour titles.

Green and home favourite Thomas Detry had made just one bogey each coming into their last 16 match and while they both kept that record intact, Green made three birdies to Detry’s two.

Scot Ferguson trailed Nacho Elvira after five holes, with the Spaniard birdieing the first, but Elvira bogeyed the sixth and Ferguson holed a 10-footer on the seventh and took advantage of the par five eighth to win by two shots. Dutchman Van Driel was made to battle for his last 16 victory, birdieing the last from eight feet to beat Dane Jeff Winther by one shot.

Southgate bogeyed the first and birdied the second and that was enough to hand the Englishman victory over Leon at level par, as the Chilean made three birdies and four bogeys.

Frenchman Antoine Rozner also made three birdies and four bogeys in his nine holes, allowing Siem to emerge as a relatively comfortable victor after birdies on the second, third and sixth from the German.

South Africa’s Burmester and Frenchman Havret did not make a birdie between them in their last 16 match but Havret’s single bogey on the first was followed by eight pars as Burmester made two bogeys and a double.

Bernd Wiesberger said: “We got it done. We had a really strong opponent this afternoon and he kept finding a last putt, it was good to get that over the line.

“I played quite steady, nothing fancy, picked up a couple of shots every now and then when I needed to and made sure I wasn’t going to give him any free shots. I kind of plugged away.

“It was not quite the start to the week we wanted but we found something yesterday and a couple under par steadily today as well. We got our games in nice and tight, it’s working very well out there.

“We need to make sure we don’t lose our focus, in this format you don’t want to be behind early in the game and just make sure 100 per cent focus is on the next shot.”

Marcel Siem said: “I am very happy with my game. Antoine (Rosner) is a strong player and I knew if I made one mistake, he was going to get me, so quite a bit of pressure. That format is unbelievable.

“Usually if you play match play you can be a lot more aggressive when you are two up. If you make a bogey and he makes a birdie, then you are all square, so on this golf course it is pretty tough mentally.

“I started with a new coach about six weeks ago just before Morocco and he got me back to my old swing a little bit, and renewed my follow though. I am staying behind the ball instead of having a reverse pivot and being too handsy on the impact, and that helps me a lot, especially under pressure hitting good shots.

Thomas Detry said : “I’m very sad, very disappointed. I played some great golf, I made one bogey the whole day. I left one putt short at 17, he made it, that’s golf, we move on.

“It was great, fantastic. Thomas Pieters came out as well and watched me, all the Belgian juniors, Belgian crowd, it’s just fantastic. At this venue especially, with a tree lined course, when the crowd get going, it’s pretty amazing.”