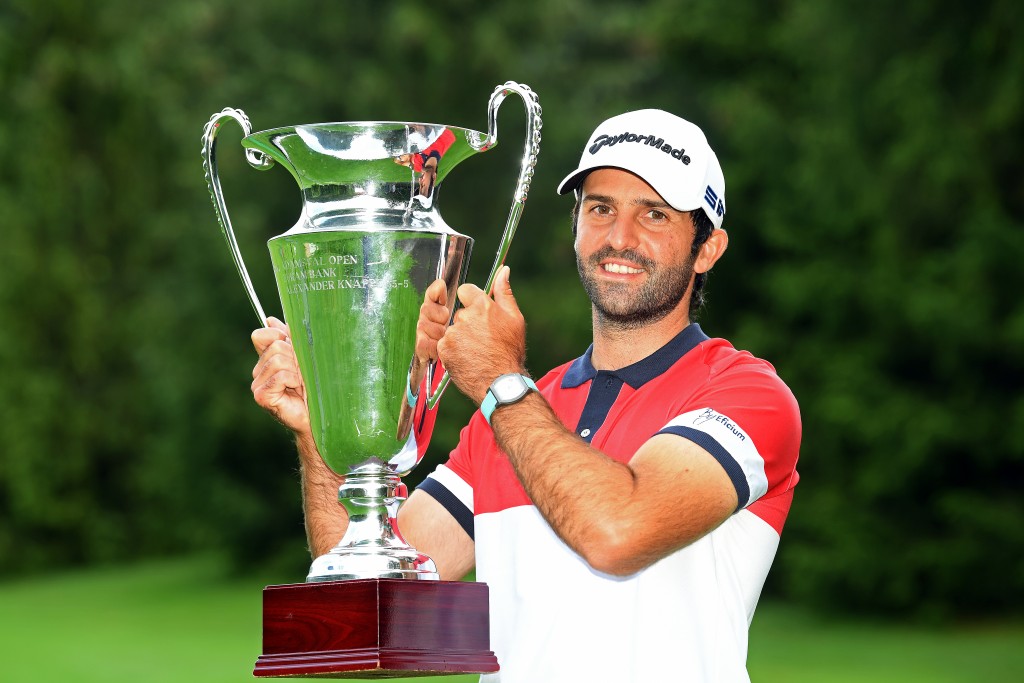 Frenchman Joël Stalter claimed his maiden European Tour victory in the Euram Bank Open in the Austrian Alps with fiancé Flora on the bag as he survived teeming rain to win. Picture by GETTY IMAGES

JOËL Stalter overturned a four-stroke deficit to win his first European Tour title at the Euram Bank Open in the Austrian Alps.

The Frenchman finished two strokes ahead of Staffordshire’s Richard Mansell in the dual-ranked European Tour and Challenge Tour event.

Victory was even sweeter for Stalter, as he shared his success with his fiancée Flora, his caddie for the week.

Stalter, whose only other win came at the Swedish Challenge, in 2016, said: “Winning here… I can’t really put it into words.

“I have been in this situation a few times and was never able to really push through.

“My girlfriend was on the bag this week. She has done an incredible job. She kept me going. She’s definitely part of my success today.

“It was a horrible day in terms of the conditions. It was tough for everyone,” said the 28-year-old, who beat Wiltshire’s Ben Stow and Wales Oliver Farr in a play-off in Sweden, four years ago.

“The course played probably 1000 yards longer,” said Joel. “But my girlfriend had her smile on and just kept me going. We just had fun

“I was playing really well and I just really enjoyed it, even though it was a tough day.

“I didn’t know I was leading until the 13th hole. Then I took my chance and really pushed through.

“I feel like today is a tribute to the last two years of getting slapped in the face a lot. I just kept pushing and believing.”

STALTER admitted he “felt nervous” over the last two holes of the final round, as he and Flora were soaked by the rain falling against the spectacular backdrop of the Austrian Alps.

“I just tried to enjoy it as much as I could. It’s what we train for,” said Stalter, who lost his European Tour card in 2017 after graduating from the Challenge Tour following his maiden win.

“All the tough days… this is what makes up for it. I just tried to stay in my game and do my best. Obviously it worked out well.”

But he moved ahead after a birdie on the 10th – his second of the day – after his compatriot played the front nine at Golf Club Adamstal in four-over par.

A bogey on the 14th hole brought him level with Mansell, who was playing in the final group.

But Stalter responded immediately with a birdie on the 15th. And a nervous wait followed as he parred his final three holes, setting the clubhouse target at 14-under.

Mansell, making just his second European Tour start after debuting at last week’s Austrian Open, made a costly bogey on the 16th.

And that gave Stalter his first European Tour victory after battling the teeming rain. The win earned him a cheque for €76,823.

The Dutchman, with six European Tour wins to his name, was left to rue the five dropped shots when he took 10 on the par five seventh in Friday’s third round.

Last year Mansell was winning regularly on the PGA EuroPro Tour, earning him seven starts on the Challenge Tour, earning his card for 2020 by finishing 64th on the Race to Mallorca.

The former Novo Southeastern University NCAA champion said: “If you had asked me at the start of the week – would you take a second place finish on your own? Yes.

“But with four holes to play when you’ve got a one-footer to tie the lead, or if you could just birdie the last, it’s difficult to swallow.

“But I’ll be back again. I know I’ll have more chances, said the 25-year-old from Beau Desert Golf Club.

“This week has given me a lot of confidence going forward. I’m happy with where my game’s at so we’ll see what happens next.

“I am good enough. I think I’ve always known that. I’ve just been waiting for a result.

“Now I’ve got that I just have that confidence, so I can go ahead and play freely now. I’m looking forward to what’s to come.”

It was a good weekend for Hampshire’s Scott Gregory, despite finishing with a one-over par 71.

•After the Austrian Alps, the European Tour moves to Close House, near Newcastle-upon-Tyne in the North East of England, next week for the Betfred British Masters.

It is the first tournament of the new six-event UK Swing which forms a substantial part of the reshaped 2020 Race to Dubai.