By Andrew Griffin on 26th September 2019 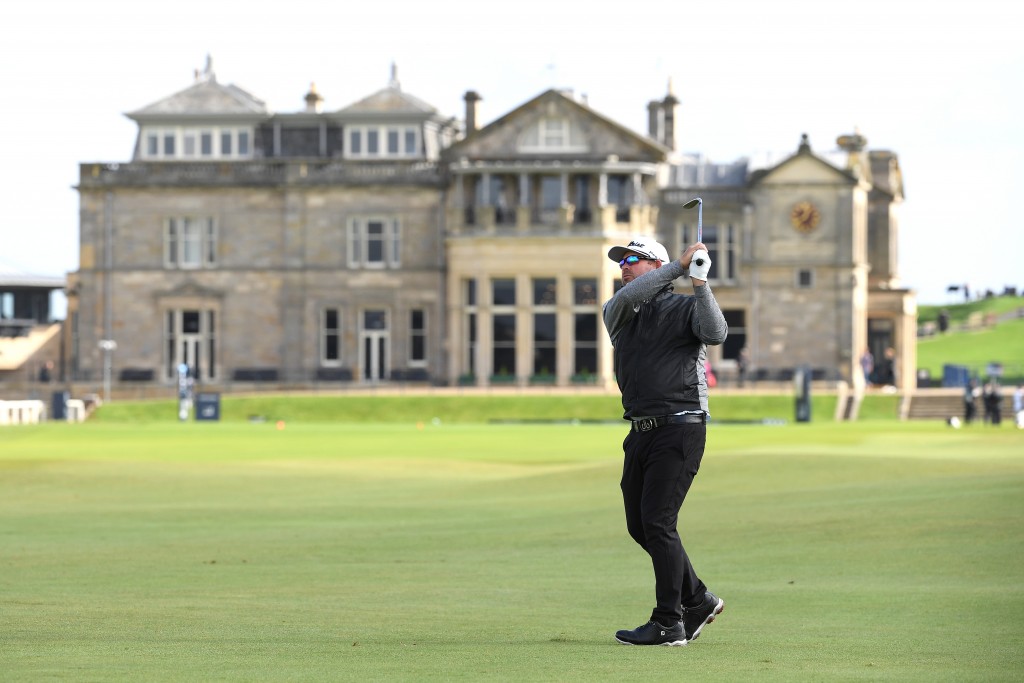 South Africa’s Justin Walters has been battling a calf injury and lost his father earlier this year but shot a superb 63 at St Andrews to lead the Alfred Dunhill Links after the first round. Picture by GETTY IMAGES

JUSTIN Walters found his form in spectacular style at St Andrews to take a one-shot lead after an emotional first day of the Alfred Dunhill Links Championship.

The South African has faced plenty of adversity on the golf course during the 2019 Race to Dubai, battling a calf injury over the summer and failing to register a top 20 in 23 starts on the European Tour.

The 38-year-old also sadly lost his father this year but revealed after carding a stunning 63 around the Old Course he felt his presence as he fired his lowest round on the European Tour for six years at the Home of Golf.

Walters said: “I haven’t shot anything under 69 or 68 in a long time. To do it here at St Andrews, and the emotions I’ve been through the last few months, it’s just so special.

“I’ve been swinging really well all-year mostly, from about US Open when I qualified, and I got to the Irish Open and tore my calf really badly.

“Really struggled to get right again for a while, and I finally got over that, and then I lost my dad.

“It was quite hard. I just kind of decided not to feel sorry for myself, really, and kind of dust myself off and coming in here, it has a healing quality,” said Walters, who is coached by West Hove’s Ryan Fenwick.

“I don’t know, it’s hard to describe. I was here with my dad when we lost Mum, and just thought I was back with him.”

Fox, Smith and Perez joined Walters at St Andrews, while Otaegui carded his 64 at Kingsbarns.

Fox said: “I played really solid and for the first time in a while I saw some putts go in and hit some great shots coming down the stretch.

“It was just nice to take advantage of those fairly benign conditions out there.

“It’s a cool format to get to play these three golf courses, and they look after us so well this week.

“I love pro-am formats, and I’ve played with Shane Warne the last couple years and we get along really well.

“We’ve had a lot of fun out there, become good friends because of this event.”

Essex’s Matthew Southgate recorded the lowest round of the day at Carnoustie with a 65 to sit at seven-under alongside Cheshire’s Paul Waring, Scot Richie Ramsay, South African Jaco Ahlers, Finn Tapio Pulkkanen and Norway’s Kristoffer Reitan.

Southgate, who seems to save his best for links golf, said he was “chuffed to bits.”

“It’s a dream come true really for me. I’ve waited a long time to go down that last hole with that feeling. A really, really special day for me.

“I fell in love with the game again, which is great. Everybody has ebbs and flows in their career with that.

“The last four weeks has been really good for me and I’ve got stuck into practise like I’m 17 again, which is great and enjoying every minute of it.”

A week after the likes of Paul Casey and Justin Rose spoke about their memories of being inspired by watchign their heroes play in the PGA Championship at Wentworth, local Hero Ramsay, who was the first European to win the US Amateur in a century back in 2006, revealed St Andrews had the same effect for him.

Ramsay, who shot 65 at Kinsbarns, said: “You always look at it and think, if I want to win one tournament, the Scottish Open, the Dunhill are the ones that are right there because I used come down here when I was seven or eight and watch the guys play in the Dunhill Cup.

“It’s cool for me to play in it and just proud that I shot a good number today,” added Ramsey, who was sixth last week at Wentworth.

“I’ll iust try to keep the foot down because there’s so many good players this week. The main goal is to get in the mix on Sunday going into the back nine.

“Old Course St Andrews, back nine on Sunday, those ingredients are just too good. That would be a dream to be there and have a chance to win,” added Ramsay, whose only top five this year came in the Betfred British Masters on Hilside’s Lancashire links, back in May

Frenchman Perez is currently seventh on a list of players with the best strokeaverage on links courses since the beginning of January 2017 – and revealed why he has become so proficient by the sea.

Perez said: “I live in Dundee. My girlfriend goes to dental school here. I’ve lived here for the last year and a half.

“Being around and playing links all the time when I’m not in tournaments definitely makes a big difference.

“It’s just being used to the bounce and used to the greens,” said the 27-year-old who has two wins on the European Challenge Tour.

“I don’t think you can play enough links golf, and it definitely played to my advantage today for sure.”