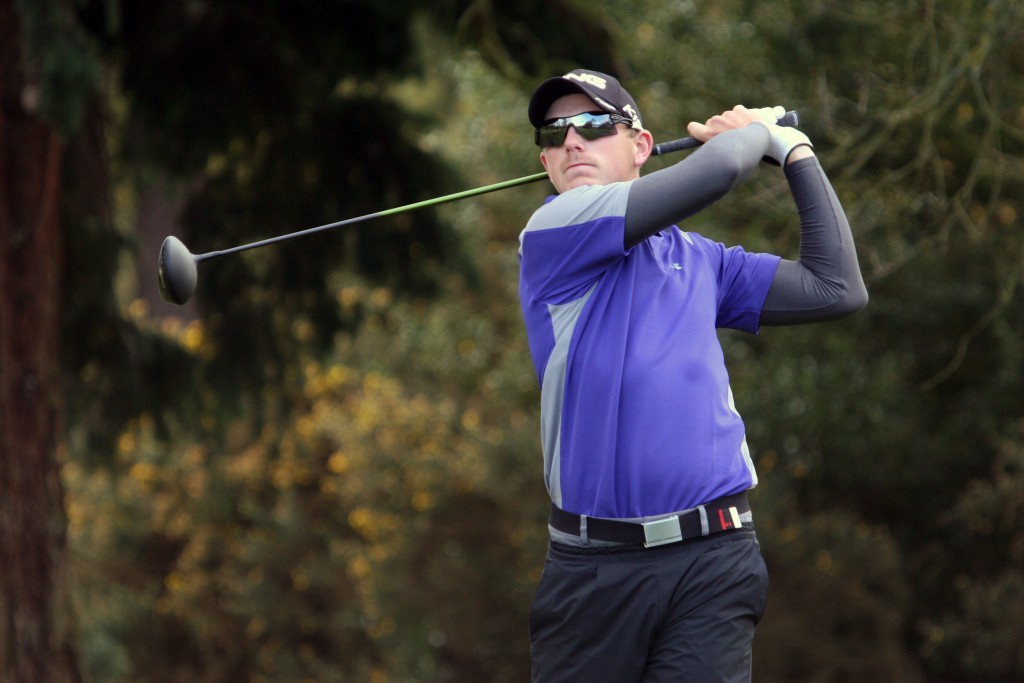 Matt Wallace playing in the Hampshire Hog at North Hants GC, in 2012

MATT Wallace claimed the glory and risked the curse of claiming the Par Three competition at Augusta – beating Sandy Lyle in a play-off on Wednesday.

The Scot was, of course, the first Brit to win the Masters back in 1988 – but in 57 years since it was introduced and won by legendary Sam Snead, none of the Par Three winners have gone on to wear the Green Jacket four days later.

Wallace’s dream start to his Masters debut began with Sky Sports driving him down the famous Magnolia Lane on Sunday, amid grey skies and showers that reminded the 28-year-old from Hertfordshire of home.

And the little boy who started out playing at Batchworth Park, who grew into one of Europe’s most ferocious closers with three wins on the European Tour in a year in 2018, has been tapping into those Hertfordshire connections as he prepares for today’s tee time with 1985 winner Bernhard Langer and Latin American Amateur Champion Alvaro Ortiz, at 5.10pm UK time.

You cannot get a better boost in your preparations to help cope with the lightning fast, sloping greens than three-time Masters winner Sir Nick Faldo, who was raised at Welywn Garden City, having only taken the game up himself as a teenager.

Faldo has always said it was watching the Masters on TV in 1971 that inspired him to taking up golf after his parents bought a new colour TV.

Wallace, who was a member at Moor Park playing for Hertfordshire a decade ago before heading off to Alabama where he spent four years at Jacksonsville State University, shortly after a certain Danny Willett had been a member of the Gamecocks team.

And it was Willett, as well as Faldo that Wallace turned to for an inside track on Augusta’s hallowed holes.

Matt said: “I’ve spent the past few days tapping into the knowledge of those who have won at Augusta, from practice rounds with Sir Nick Faldo, to playing the Par Three event with Danny Willett.

“When Danny won the Masters in 2016, not many people fancied him to do it but he was in the top 10 of strokes gained in approach play, so statistically he should have been among the favourites.

“I chatted to Danny about it and we talked again yesterday as I tried to get as much information as I can.

“It clearly worked as I won the Par Three thanks to that hole-in-one on the eighth. The event is such a cool tradition but it’s done now and my mind’s on round one.

“Being at Augusta is what you dream about. I remember trying to get tickets in the ballot with my dad, we missed out and I always thought that was my chance gone of being here in any capacity.

“But driving up Magnolia Lane for the first time in the rain on Sunday, I was just speechless.

“It was so much better than I could ever have imagined and, by Amen Corner, I was playing in pure sunshine, and this place is beautiful.

“It’s crazy for me. I’m just Matt Wallace from Pinner and here I am, and the mad thing is that I deserve to be here.”

Wallace, who was playing in the Selborne Salver and Hampshire Hog as an amateur just seven years ago this month, admitted that even playing with a hero like Sir Nick Faldo, he found it hard not to play very intensely.

But the kind of bubble the top players need to be immersed in shone through from some wise words from “The Master.”

Matt revealed his hero explained what happened when the defending champion – after his famous head-to-head with Greg Norman, who lost a six-shot lead to Faldo in 1996 – played with Tiger Woods in 1997.

The future World No. 1 eventually won the tournament by 12 shots and started his domination of the game of golf for the next decade.

Faldo said he never watched the young Tiger who opened with 40 on the front nine, on the Thursday, hit a shot until the 12th hole when he played a chip shot on his way to shooting 30 on the back nine before finally ending up on 18-under before having Sir Nick hang that famous jacket around his shoulders.

Matt, who won six times on the Alps Tour in 2016, realises he needs to be equally solely focused on his own game for his Masters debut.

The winner of last year’s Made in Denmark when he was trying to force Ryder Cup captain Thomas Bjorn to consider giving Wallace a wildcard, said: “You have to think that whoever you play with, however big the name, they don’t care about me so I can’t care about them. As bad as it might sound, that’s the reality.”

The other major lesson learned from Faldo is approach play will be key around Augusta National Golf Club.

Matt added: “The first port of call is to get the ball in the middle of the fairway, and that suits my game.

“Drive the ball well and you have chances to hit the positions you want to.”

Wallace also has one of Faldo’s old caddies on the bag – Belfast’s Dave McNeily, who also caddied for Nick Price, Retief Goosen and Padraig Harrington.

Matt, who has been relaxing in the evenings with his favourite foods at a big house in the company of his manager Chubby Chandler, said: “The key is to feel relaxed and I’ve got my team with me and my girlfriend, Chelsie, who caddied for me in the Par Three event.

“I’m 36th in the world, I’m here by right, and I believe I have as good a chance as anyone.

“This is the one I want to win, growing up it was always the Green Jacket and The Open.”