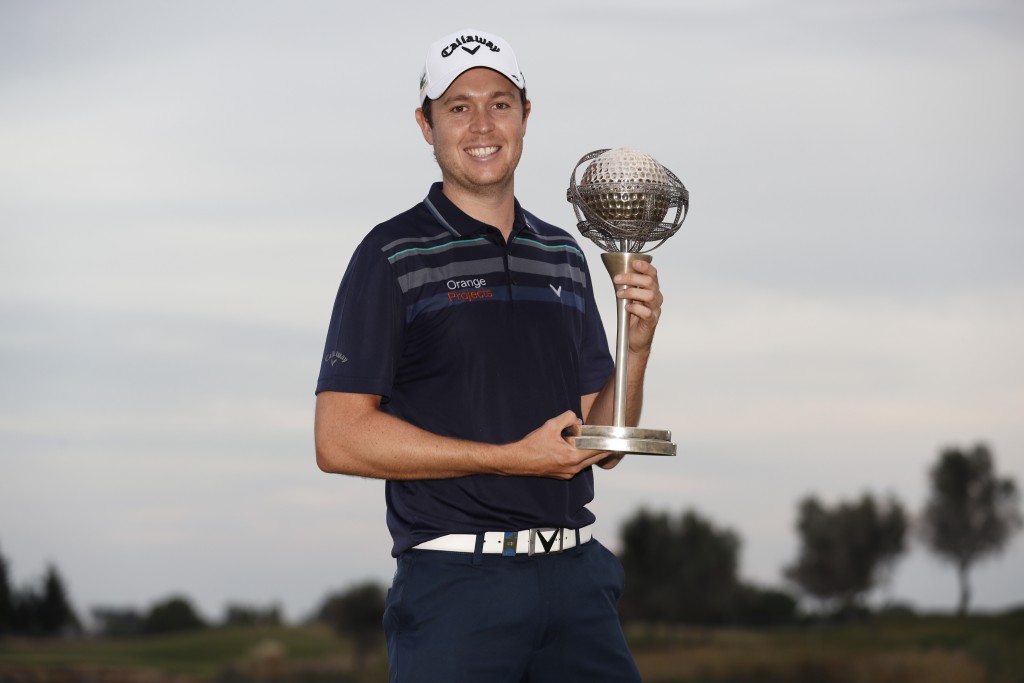 SURREY’S Steven Brown overturned a three-stroke deficit to win his first European Tour title at the Portugal Masters and secured his playing rights for the 2020 season in the process.

The Wentworth member arrived in Portugal needing a top-three finish to secure his card for 2020– and started the final day in the Algarve in fourth place.

But the 2011 English Amateur Champion put the pressure on 54-hole leader Brandon Stone after the turn with a birdie on the 11th.

And a spectacular eagle on the 12th – after hitting his second shot to just four feet – would ultimately hand him his maiden European Tour victory at Vilamoura’s Dom Pedro Victoria Golf Course.

Brown, who had finished tied eighth on the much tougher Le Golf National course in Paris a week ago, said: “It’s hard to put into words. It hasn’t sunk in. It was a weird day. You never know with this game.

“It’s crazy to think how well I’ve played this month and how bad the first two-thirds of the year were. I never thought this would happen – I was counting down to Tour School and getting ready for that.

“That shot I hit into 12 was probably the best shot I’ve ever hit. It couldn’t have come off more perfect,” said Brown, who was a winning member of the 2011 Walker Cup team against the USA at Royal Aberdeen.

“I saw the leaderboard at 13 and saw Justin was playing well and Brandon was still ahead of me,” added Brown, who lost a play-off to Matt Wallace in the Made in Denmark last year.

“I kept telling myself to keep going – we had holes to play. It seems like everyone fell away at the end. It went my way because I just parred in,” said Brown who was greeted by the Hertfordshire ace in the scorer’s hut after posting the clubhouse lead on 17-under, with Stone on the 18th tee.

“I’ve just had a calmness in my head the last few weeks – even today. I like the fact I had to go for it and wasn’t trying for a good result,” Brown added.

“I had to seize the chance to win the tournament. That’s the difference.

“Before I’ve thought… ‘I’m up there and had a good week, that’s great’ – this week it was do or bust.

“I can’t believe it,” said Brown, who was congratulated by Walker Cup team-mate Andy Sullivan – a former winner at Dom Pedro Victoria – spraying him with champagne, on the putting green after Stone failed to birdie the 18th hole, playing in the last group.

A gaggle of English players joined in the celebrations, including Essex’s Oliver Fisher, who had a chance of winning going into round four, plus two-time Portugal Masters winner Tom Lewis, another of the Great Britain and Ireland team that saw off the Americans eight years ago in Scotland, including PGA Tour winners Jordan Spieth, Patrick Cantlay, Harris English and Russell Henley.

Brown and Stone were tied with just five holes to play after the South African bogeyed the 13th, with the Englishman moving ahead after his rival dropped another shot at the 16th.

Brown held his nerve with par on each of his final six holes to secure his first European Tour title – his playing rights for 2020 – and his spot in the Turkish Airlines Open in a fortnight’s time.

The latest product of the Wentworth Academy programme – that includes Ross Fisher and Annabel Dimmock on the Ladies European Tour – will now play in the first of three consecutive Rolex Series events at the end of the 2019 season.

Stone shared second place with his compatriot Justin Walters – who needed a strong week to secure his playing rights for next year, which he did after moving up to 79th from 121st on the Race to Dubai rankings.

Frenchman Adrien Saddier finished fourth, while Northumberland’s Chris Paisley – another who congratulated the new champion as he was preparing for a possible first play-off in the Portugal Master’s history rounded out the top five.

Similarly to Walters, Hampshire’s Jack Singh-Brar needed a strong performance to secure his card for 2020.

The 22-year-old, who started playing for the county’s juniors while a member at Bramshaw, started the week as the last man in on the Race to Dubai in 117th place.

Singh-Brar, who first played on the European Tour as an amateur in Russia after winning the Faldo Series in 2012, said: “I’m over the moon.

“I got off to a great start – three-under through nine – I just tried to keep pushing.

“It’s hard when you know how much is on the line, I’m just so glad to have done it,” added Singh-Brar, who played in the same Great Britain & Ireland team as fellow Hampshire junior graduates Scott Gregory and Harry Ellis, in Los Angeles.

“You wake up with thoughts racing round, even today. I knew I had to shoot a good number because there were so many people chasing me down.

“Trying to control my emotions, even coming down 18 I could barely hold the club. I struggled to get comfortable all year – hence my results. Now I feel like I can push on.”

Gregory, from Corhampton, will join Wentworth member Ellis at the second stage of the European Tour Qualifying School next week after crashing out at the halfway mark on Friday, having taken a ninth at the par four seventh, in round two, missing the cut by eight shots.

Ellis came through the first stage last month, and has produced back-to-back runner-up spots on the MENA Tour in October.