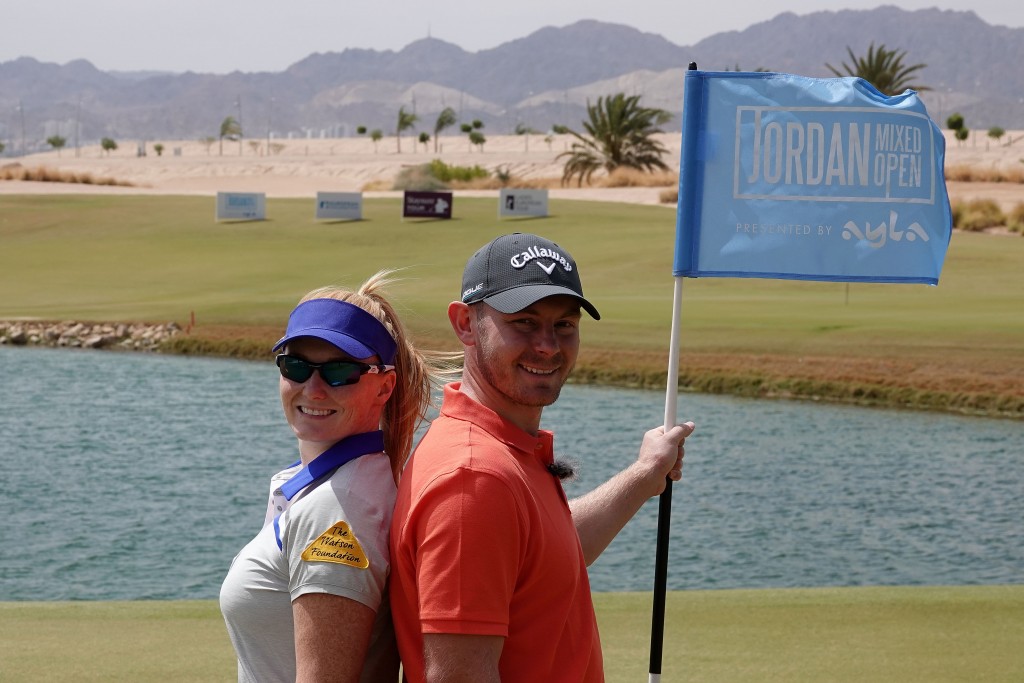 Scott and Kylie Henry will become the first husband and wife to compete in the same professional tournament at this week’s Jordan Mixed Open. Picture by GETTY IMAGES

MORE than a trophy is on the line for Scott Henry and his wife Kylie this week with the married couple also playing for bragging rights in the inaugural staging of the Jordan Mixed Open.

The Scottish couple will become the first husband and wife to compete against one another in a professional golf tournament this week, with the pair set to do battle in the innovative event which features players from the European Challenge Tour, Staysure Tour and Ladies European Tour.

Although the couple met playing the game of golf, they admit there will be no love lost out on the course tomorrow when the tournament gets under way at Ayla Golf Club, on the Red Sea coast.

Scott said: “In terms of our finances, if we found ourselves coming down the stretch battling it out for the win that would be ideal – although it might not do much for the relationship.

The winner of the 2012 Kazakhstan Open on the Challenge Tour added: “We are both very competitive when we play each other and I probably do win most of the time.

“But Kylie has been coming into a good patch and beat me the other day. There will definitely be a bet between us and it will probably involve household chores. But the bragging rights will be the thing.”

The Henrys will each face a slightly different test this week, with the course set up at 7,100 yards for the Challenge Tour professionals, 6,601 for the over-50 players and 6,139 for the female competitors.

While Kylie, who is a two-time winner on the Ladies European Tour, admits there will be some rivalry, she does confess she’ll be transparent in her approach.

And she stressed they will both return to married life quickly once each day’s play is over.

Kylie said: “We won’t hide anything from each other in terms of strategy on how to play the course.

“We’re both really supportive of each other’s golf and we help each other as much as we can. We’ll discuss how our round goes, but then the golf chat is quickly finished, and we get back to just regular life together.

“We met through the game when we were teenagers in the Scottish set-up and we never imagined back then that we would be playing against each other in a professional event.”

Both players also admit how significant this week is for all three tours and golf more broadly, with 40 players from the Ladies European Tour, 40 from the Challenge Tour and 40 from the Staysure Tour all competing for the same first prize.

“This is a huge week for women’s golf,” Kylie said. “I think all the exposure that women’s golf can get is going to help, and if more girls and more women take the game up it’s a win-win situation.

“Maybe the fact that the Augusta National Women’s Amateur, the ANA Inspiration and the Jordan Mixed Open are all in the same week, there’s a lot of focus around women’s golf this week.”

“It’s great to have such big prize money for the girls and for the Challenge Tour guys as well,” said Scott.

“It definitely adds to the excitement. There’s not much better than winning a nice chunky cheque and a trophy at the end of the week.”

Also in the field this week are another couple – Norway’s Marianne Sakrnpnord and her fiancée Richard Green – who will also compete for a share of the $393,000 prize fund.

The 54-hole tournament will start on Thursday, at 7.30am local time – follow @Challenge_Tour, @StaysureTour and @LETGolf on Twitter for live updates from Jordan.