By Andrew Griffin on 7th November 2019 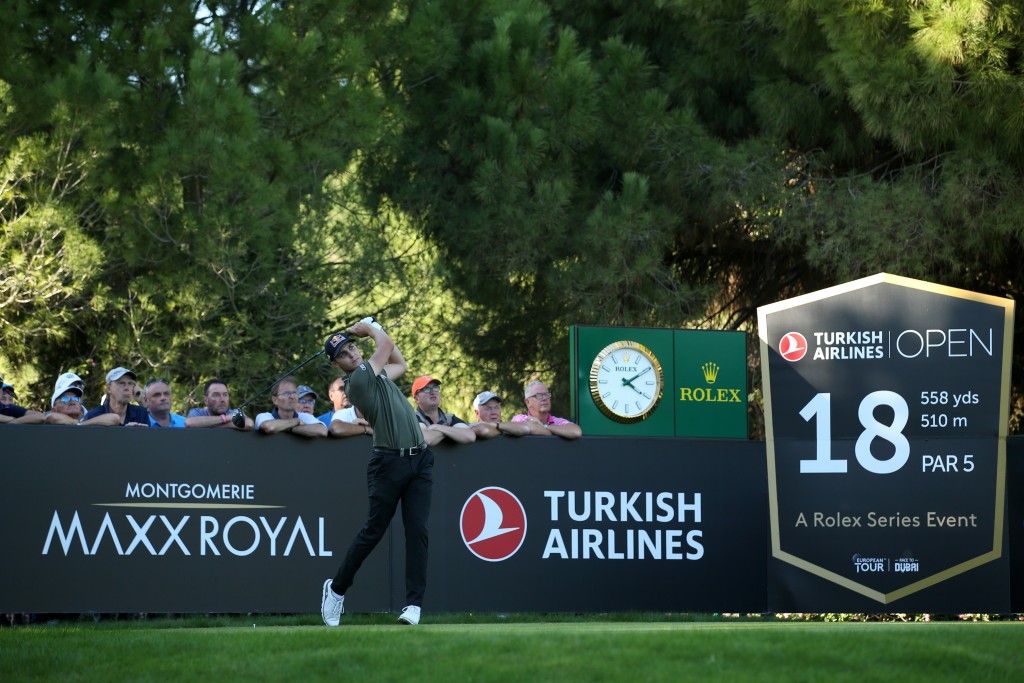 Matthias Schwab birdied the last at The Montgomerie Maxx Royal to tie Tom Lewis at the top of the first round leaderboard in the Turkish Airlines Open. Picture by GETTY IMAGES

Perfect conditions greeted the leading players on the 2019 Race to Dubai as they gathered in Antalya for the sixth Rolex Series event of the season.

And it was former British Boys Champion Lewis and Schwab who took the most advantage of the conditions, carding rounds of 65 to get to seven-under par.

Austrian Schwab has nine top 10s so far this season, including two top fives in his last three events at the Italian Open – his best finish in a Rolex Series event – and on his debut at the WGC-HSBC Champions, in Shanghai, last week.

Lewis’ two European Tour wins have both come at the Portugal Masters and the Welwyn Garden City member birdied six of his last seven holes to rocket up the leaderboard.

But 28-year-old Lewis was a recent winner in the USA , claiming the Korn Ferry Tour Championship, at Indiana’s Victoria National GC, in September, to earn his PGA Tour card for 2020.

And that form followed him across the Atlantic to Belek. Lewis said: “I just holed the putts.

“I felt like I wasn’t comfortably rolling it on the front nine, even though I hit some good shots.

“On the back nine I continued to hit good shots, and I felt more confident on putts,” said Lewis who was in the same Walker Cup team that faced America at Royal Aberdeen in 2011, as Steven Brown, the winner at this last month’s Portugal Masters.

“That’s going to be the difference this week between the guy that wins and the guys that don’t,” added Lewis, who also won the prestigious St Andrews Links Trophy at the Home of Golf in 2011, before going on to lead the Open at Royal St George’s as an amateur on the first day that summer.

“I think he’s going to get good breaks, he’s going to roll it well,” said Lewis, who hails from the same club where Nick Faldo became the country’s top teenage talent, in the mid 1970s.

Schwab made the quicker start of the two leaders before catching Lewis on the 18th with his ?? birdie of the day.

“It was a very good round for me,” said Schwab. “I got off to a nice start – five-under through eight and managed to keep the momentum going on the back nine.

“I was hitting it nicely today and made a few putts, so overall it was a good day for me.

“I’m just trying to give it my best. Every time I tee it up, it seems to be working well the last few months, but I have no recipe.”

The leaders have an elite chasing pack behind them, with Ryder Cup stars Alex Noren, from Sweden, and Belgian Thomas Pieters just a shot further back at six-under, alongside the USA’s two-time European Tour winner David Lipsky.

Noren, who has struggled to find the form that earned him a Ryder Cup debut at Le Golf National, said: “I hit it well off the tee, especially after hole three, four onwards – I played really well.

“I got a lot out of my driver, which helped on the back nine, and especially on the two par fives. Just felt like an easier round than a lot of other rounds this year.

“The focus is there, definitely, and I think my game has gotten a lot better the last few months. I’m just trying to kind of put all the parts of the game together, which I did today.”

Pieters who made his debut in the big defeat by the USA at Hazeltine, in 2016, is also looking to rekindle the form that brought him an 11th housr win in the Czech Republic to earn a wildcard from European captain Darren Clarke three years ago.

“It felt lovely,” said Pieters who made a birdie at the first from the sand.

“After two weeks off, it’s nice to start like that, holing the bunker shot on the first.

“I was really striking it well with the irons, maybe not as good off the tee, but my putter bailed me out a couple times for par as well.

“All in all, very pleased. The game is in good shape. Putting well, hitting my irons very well. So maybe some work on the driving and we’ll be good.”

Lipsky said: “It’s the lowest round I’ve shot in a while and to go out there and play as solidly as I did gives me a lot of confidence going forward.

“I missed five, six, seven cuts in a row or something like that. It’s been up-and-down, but I feel like the game’s turning around and getting a bit of consistency back.

Rose is looking to join the Nick Faldo, Colin Montgomerie and Ian Woosnam as the only players to win a regular European Tour event three years’ running.

The North Hants GC member who birdied the last three holes said: “I guess job done. The hot finish was exactly what we needed.

“I was aware of the leaderboard. Obviously, it was a perfect day to play golf as it normally is here in Turkey, and I could see the lads got in low.

“Our group was having some frustrations – just trying to make the birdies, certainly make the putts.”

Rose added: “As the sun got low, you could kind of see what you’re facing and it’s difficult to trust your reads coming in.

“I managed to wiggle in there the last few holes, so delighted with the score, really, more than anything.”

•For live scoring from the Turkish Airlines Open click here.

Amateur Championship to go back to Nairn where Lee James beat Gordon Sherry
Race to be Challenge Tour’s No. 1 hots up as Laporta hits the front in the Grand Final