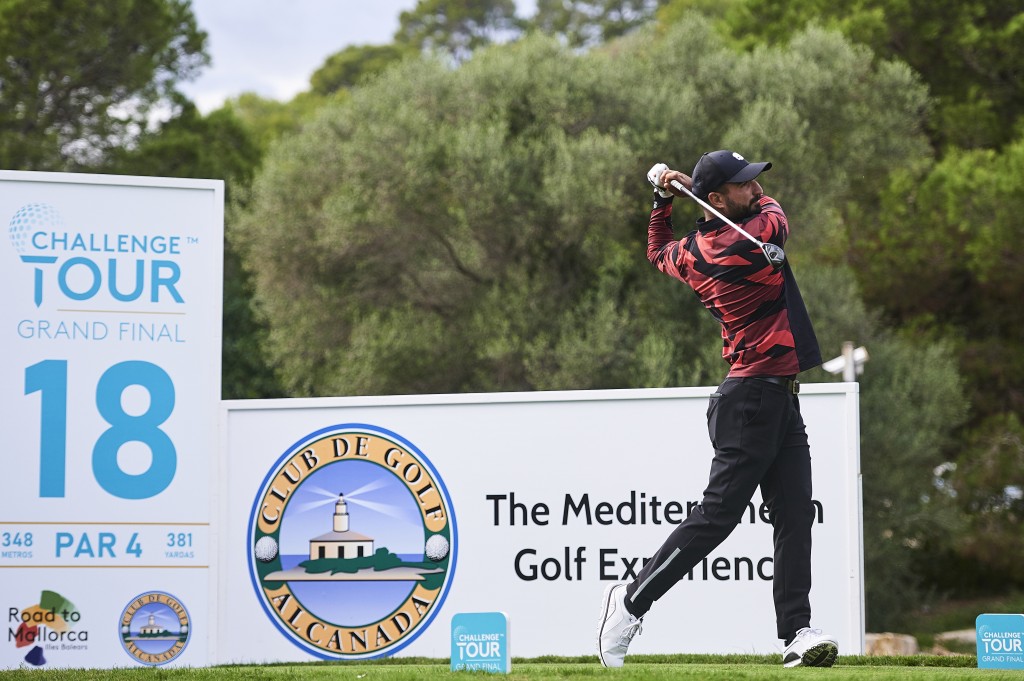 Italy’s Francesco Laporta leads the Road to Mallorca after taking the first round lead in the Challenge Tour Grand Final with a three-under par 68. Picture by GETTY IMAGES

FRANCESCO Laporta began the Challenge Tour Grand Final occupying the second position on the Road to Mallorca rankings… but now the Italian is projected to become Challenge Tour No. 1 by Sunday, after taking the first-round lead.

Laporta carded five birdies against only two bogeys to sign for a three -under par 68, which was one shot better than his nearest rivals on the difficult Club de Golf Alcanada layout.

“It was a tough round today,” said Laporta. “The wind came up this morning, then went down and then it came up again during the last couple of holes.

“I played solid and only missed a couple of putts on the first two holes, but after that the putter worked better.

“I’m pretty happy about my round and we’ll just have to see what happens in the next few days.

“The No. 1 spot is in my mind, for sure. I came here to fight for the first spot and I will fight all week for that.

“It’s a good start and hopefully I have another one tomorrow.”

Laporta’s strong start continues an impressive run of form for the 29-year-old, who recently finished as the low-Italian at the European Tour’s Italian Open, a Rolex Series event, before winning the Hainan Open the following week.

Laporta holds a one-stroke advantage over home-favourite Sebastian Garcia-Rodriguez and Welshman Rhys Enoch, who each carded rounds of 70.

Now the Challenge Tour Grand Final is under way, the projected Road to Mallorca rankings come into focus – with the leading 15 players on the season-long points race earning European Tour cards at the end of the week.

While Garcia-Rodriguez began the tournament positioned 13th on the order of merit, Enoch teed it up outside of the coveted cut off in 25th.

But the winner of the D+D Real Slovakia Challenge in July, who currently sits in a two-way tie for second place, is now projected to climb inside the magic number – and finish the year in 13th.

Enoch, who hailed from Cornwall, but now lives in Cardiff, said: “It was very tricky. I don’t think we realised how tricky it was going to be.

“I think the wind was quite calm earlier and I thought the scoring was going to be low.

“It’s just easy to drop shots, really, really easy. I did that really well today – keeping the bogeys off the card – with only one drop,” said a happy Enoch.

“So it was just about patience and missing in the right spots, especially with how sloped the greens are.

“The wind on the front nine was all over the place. I’m really pleased.

“There are plenty of different outcomes, but I’m focused on winning really.

“Second would probably be enough if I’m on my own, but then I’m relying on a lot of other people.

“I’ve just got to try and win because that takes care of it, so that’s my aim,” added Enoch, who became a father when Carter was born in August.

Oliver Farr, who came into the Grand Final holding the 15th and final European Tour card, overcame a triple bogey and a double bogey to finish his round in a tie for 11th place on one-over.

That is currently enough for the Welshman – who grew up playing golf at Kidderminster’s Cleobury Golf Club – to hold onto the final graduation spot, having lost his European Tour card in 2015 and 2018.

Farr, who is attached to Hereford’s Burghill GC, said: “There were two bad holes but 16 pretty good ones and looking at the scoring today, to only have two holes where I dropped shots today is pretty good.

“Obviously I dropped a lot of shots on those holes. It was a challenging day on the greens, but I felt like I handled them pretty well, and hopefully we can make amend for these errors tomorrow.

“Playing the practice round it was one of the first weeks where I haven’t been able to feel what a good score was,” said Farr, who played less events this season to spend more time with his family – after becoming a father for the second time in April, and following a bereavement in his family since.

“Sometimes you can sense what a good score is. People were asking me and I didn’t know. I thought the set-up was fair,” added 31-year-old Farr, winner of the Lalla Aicha Challenge Tour, in Morocco, in early October.

“There were some tough pins and that’s probably why the scoring is down, but I’m only a few shots behind and it’s early days yet, so hopefully I can push up.”

Challenge Tour Grand Final debutant Garcia-Rodriguez was happy to be playing on the Balearic island.

Sebastian said: “The golf course is amazing. The greens are very difficult.

“The key for me today was the second shot. My strategy on the tee box was to hit a lot of drivers, which set me up nicely.

“In general I’m so happy. It’s my first time playing in the Challenge Tour Grand Final and this start has made me so happy.

“I don’t feel any additional pressure. It’s the next tournament. It’s the same – the same balls, the same clubs, the same tees,” Garcia-Rodriguez added.

“The conditions are probably the best we’ve had the entire year in terms of difficulty. It’s so hard and it feels similar to the European Tour.

“My game plan has been the same for the entire year. At the start of this year I told myself I would just take it shot-by-shot.

“I played 10 tournaments on the Alps Tour at the start of the year after losing my Challenge Tour status two years ago, and this wasn’t even in my mind in January of this year.

The second round of the Challenge Tour Grand Final begins on Friday at 7.30am GMT with Laporta, Garcia-Rodriguez and Enoch set to go at 10.05am.