By Andrew Griffin on 29th September 2019 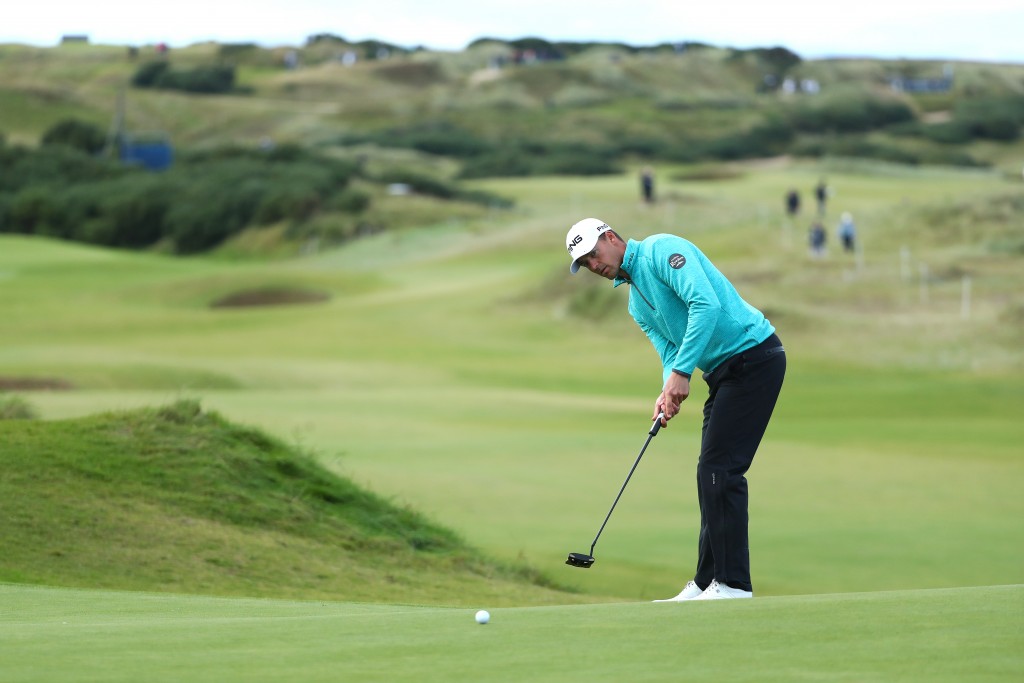 Victor Perez, the Frenchman who lives in Dundee, shot an eight-under 64 at Kingsbarns, in the third round of the Alfred Dunhill Links Championship. Picture by GETTY IMAGES

DUNDEE-based Frenchman Victor Perez and Essex’s Matthew Southgate will enter the final round of the Alfred Dunhill Links Championship in a share of the lead, with both players chasing a maiden European Tour title.

The famous St Andrews Old Course will play host on the final day and with the wind set to kick up, it will be all to play for among the chasing pack which features Cheshire’s Paul Waring, American Ryder Cup player Tony Finau and former World No, 1 Luke Donald.

But Perez and Southgate are in pole position at the Home of Golf, as they sit atop the leaderboard with a two-stroke advantage on 20-under par.

And Southgate will be looking to write a piece of St Andrews history by becoming the first player to win the St Andrews Links Trophy – one of the top amateur trophies – and the Alfred Dunhill Links, one of the most prestigrious on the European Tour.

Perez, who lives with his partner in nearby Dundee will be vying for a first European Tour victory in his rookie season, having graduated from the European Challenge Tour last year.

The 27-year-old carded an eight-under 64 at Kingsbarns Golf Links which included a run of five successive birdies.

Perez said: “It was awesome. Bit windier today. Out of all the courses, we got a bit fortunate to play here today, being a bit wider off the tee. Maybe Carnoustie would have been the tougher course today.

“I played great and hit the ball really well. Felt like I made a couple of putts. I didn’t make any bombs out there or anything.

“Missed a short one on eight but the rest of the ball-striking was class today and I was really pleased with nine birdies again, obviously.”

Southgate, meanwhile, is making his 140th appearance on Tour and the closest he has come was a share of second place at the 2017 Dubai Duty Free Irish Open.

The 30-year-old signed for a seven-under 65 at the Old Course after finishing with a birdie at the ninth, his 18th.

Matthew Southgate, who won the 2010 St Andrews Links – played over three rounds on the Old Course, and one at either the neighbouring New or Jubilee Courses, said: “I didn’t miss many shots and got the speed of the greens really good.

“I set up so many chances. I was always bound to make a good fistful of them. Not much you can say really. Just really solid all day.

“My swing feels very solid. I feel very happy in my own head at the minute and playing with such a clear mind and just easy swing thoughts.

“The biggest job tomorrow is going to be keeping me in check rather than the golf swing. I’m hitting the ball fantastic the first three days, so there’s no reason why I can’t shoot another good score.

“Someone is going to post a good number, so it’s going to take a good score to get the win.

“I’m so passionate about winning tournaments and being here at the Home of Golf, tomorrow is going to be a difficult one to just keep myself in check and keep producing what I have done the first three days.”

Waring, who grew up playing links golf at the Wirral, and won the 2005 English Amateur Championship at his home club Bromborough, said: “Anything under par around Carnoustie you always take – especially with quite a stiff breeze out there.

“Pleased to shoot as low as I did and get myself involved with the tournament.

“I think when I’m happy and I’m having fun, I feel like I’m at my best. So, this week kind of blends well into the two elements for me.

“If I get a little bit too into it, a little bit sort of too strict on myself, it can have negative effects, said 34-year-old Waring, whose first win came in last year’s Nordea Masters.

“When I’m bouncing around and having a laugh, it’s the true me. It’s showing this season how I’m playing. Enjoying myself a bit more.”

Finau said: “I was happy with the way I played. Missed a short one on 17, but outside of that I played really nicely.

“I thought it was tough. That front nine, every hole was into the wind. It was quite cool this morning when we teed off, so a lot of those holes played a lot harder than they normally do with the wind.

“I was happy to get around the front nine in a couple under and I was able to score on the back nine,” said Finau, whose only PGA Tour win came in Puerto Rico, three years ago.

“It’s very cool to be at the Home of Golf. The Old Course, there’s nothing like it. So, to be able to tee it up tomorrow and play and have a chance to win a golf tournament here is going to be something special,” added Finau.