By Andrew Griffin on 30th September 2019 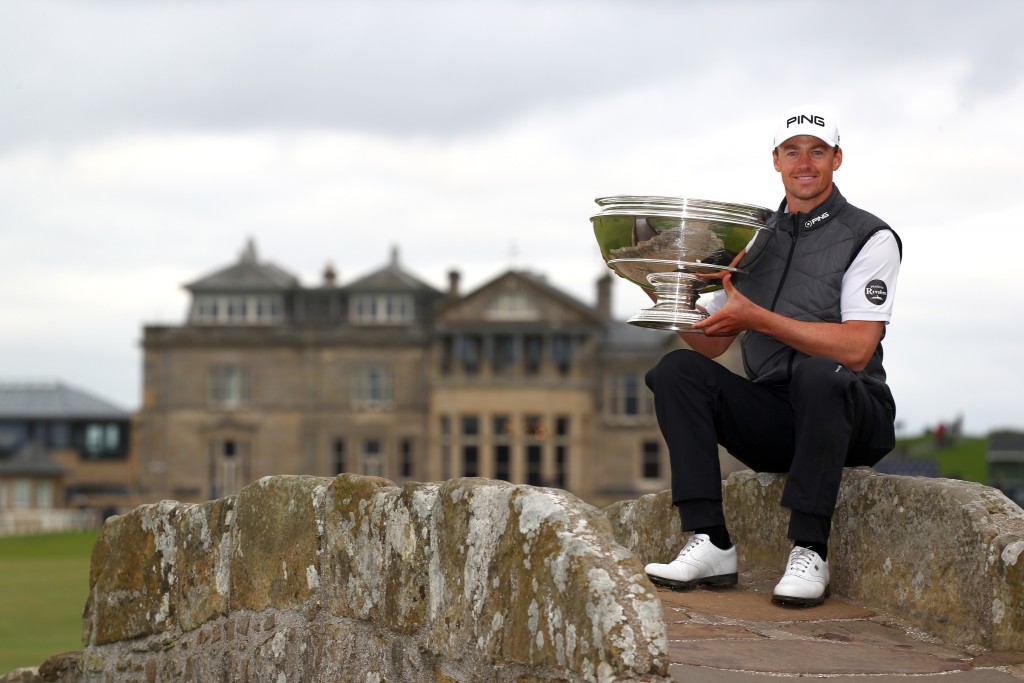 Bt the Frenchman was really feeling at home – his breakthrough victory came just 15 miles from the place he currently calls home… Dundee.

And Perez was greeted by the famous 18th green next to the R&A clubhouse where so many of the game’s greats have been crowned Open Champion, by his girlfriend Abigail, who is a dentistry student in the Scottish town, just along the Fife coast.

Perez was delighted to cut his teeth with a maiden victory, saying: “It’s really hard to describe right now. I feel like the emotions were really high all day, and really cold, windy, long day out there.

“I felt like I was able to battle. Matt played amazing. I was expecting some of the guys to charge.

“We were fortunate in a it was a one-on-one battle on the back nine. I was able to make that birdie on 14 that really pulled me back – and then just held strong till the end. I was fortunate it was my time.

“After the birdie on 14, getting tied for the lead, playing 15, I just tried to still give myself chances. You always expect these guys at this level to make birdies and you have to stay aggressive.

“I think when Matt hit his drive down 16, well, I thought: ‘There you have it. This is what these guys do. They come in there and give themselves chances.’

“I hit a great drive to 17 that really settled me and a great iron shot that I thought hit it close. Going down the last with a one-shot lead is all you can ask for.

“The format is awesome. I think it’s a chance for the amateurs to see from inside the ropes and connect with the players, which is something that they strive for, and they love to do and chat with us, and ask what clubs we hit – and why, and all those kind of questions.

“ I think it’s really cool that we can give back to those people, as well,” Perez added.

“Obviously there’s nothing like a win. The confidence you get from getting it done – it’s so difficult at this level to win,” said the two-time Challenge Tour winner.

But there was clue to Perez’s victory – going in to the Dunhill he sat seventh in strokeaverage on links courses since January 2017, at 69.25.

It was a tense battle throughout as the 27-year-old locked horns with his playing partner Matthew Southgate, having both shared a two-stroke lead heading into the final day.

Perez was one stroke behind the Essex golfer – who was playing with former R&A secretary Peter Dawson – heading into the back nine, despite a flawless front nine completed in two-under.

A dropped shot at the par three 11th meant he dropped further off the pace.

But a birdie at the par five 14th for the 2018 European Challenge Tour graduate, and a bogey for Southgate, meant a two-shot swing had them level going down the stretch.

Southgate’s missed par putt at the 17th was decisive as Perez edged ahead and two pars at the famous final hole at the Home of Golf earned Perez a career-changing victory as he moved to 17th in the Race to Dubai rankings.

Southgate had been left feeling frustrated after missing the cut at Wentworth a week earlier.

But a return to Carnoustie where he and his father have been country members and the Home of Golf – where he claimed the biggest victory of his amateur career in the St Andrews Links Trophy, in 2010, clearly rejuvenated him.

Southgate, who saves his best performances for links golf – he was sixth in the 2017 Open at Royal Birkdale – could console himself with an important outright second place finish.

Southend’s Southgate, who is attached to Thorpe Hall – the club where amateur legend Sir Michael Bonallack, the R&A secretary before Peter Dawson, is also a member – said: “I’ve done everything I can do.

“I was impressed with how level-headed I stayed and felt amazingly calm really all day, which is quite a surprise to be honest.

“I thought I might be a little more excited and kept a great rhythm with my swing. Didn’t miss a shot all day and if anything, hit a couple too good that went past the flag.

“It’s been a horrible season for me and this has sorted that right out and gotten us right back to the Race to Dubai and that’s the goal for me, really.

“I think I’ve proven to the world this week that when I do switch it on, I can mix it with the best and I’ve beaten a hell of a lot of good players this week.

“I’ve played some great golf, and you can’t help but be pleased. Victor, what a gentleman. I’ve never played with him before, and couldn’t be happier for him.

“You know, one of us was on the first tee and I was thinking, I hope one of us gets our first win, and golf’s bigger than individual.

“It’s a big gentleman’s game, and it was an absolute pleasure to shake his hand on the last green there. He played fantastic all day, and I’m chuffed to bits coming second to such a great bloke.”

That runners-up spot secured Southgate’s European Tour card for 2020 after a disappointing season up to that point.

Tommy Fleetwood, meanwhile, won the team prize in the pro-am event alongside partner Ogden Phipps II, pipping Rory McIlroy and his father Gerry to the title, denying the four-time Major winner a perfect 60th birthday present for his dad.

Fleetwood, who denied the McIlroys the team prize by virtue of his better pro’s score, said: “I played all right today. I think putting was a massive difference.

“Yesterday I struggled and it was a bit of a flat day. For the most part today, I was thinking about the team competition.

“I think it took my mind off everything else and just got on a really nice run,” said Fleetwood.

“We’ve played in it a lot and I know how much it means to those guys. I was nervous.

“I said to Ogden, we had five holes left, and he said, ‘I’m going to need you on these last few.’

“He was nervous coming down the stretch but we did great. To win it. It means a lot when it’s not just yourself and it’s a partnership.”

For final scores at the Alfred Dunhill Links, click here.