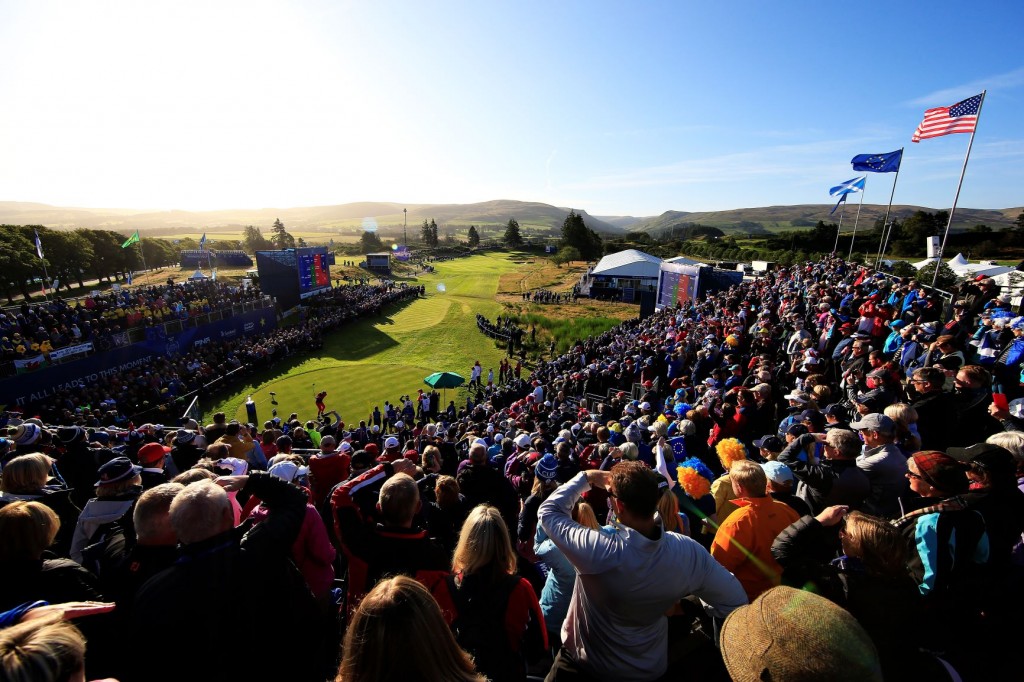 Europe edged a thrilling opening day of The 2019 Solheim Cup which ended 4½-3½ after a tense afternoon fourballs session at Gleneagles on Friday.

On a day which began with the biggest and loudest first tee ever seen at a Solheim Cup, Europe claimed the opening session 2½ points to 1½ and shared the spoils in the afternoon as the fourballs ended 2-2.

It could have been a larger margin were it not for Lexi Thompson holing a putt from 18 feet to win the 18th with Jessica Korda and grab a half from Carlota Ciganda and Bronte Law, and then Nelly Korda and Brittany Altomare snatched an unlikely half against Charley Hull and Azahara Munoz. 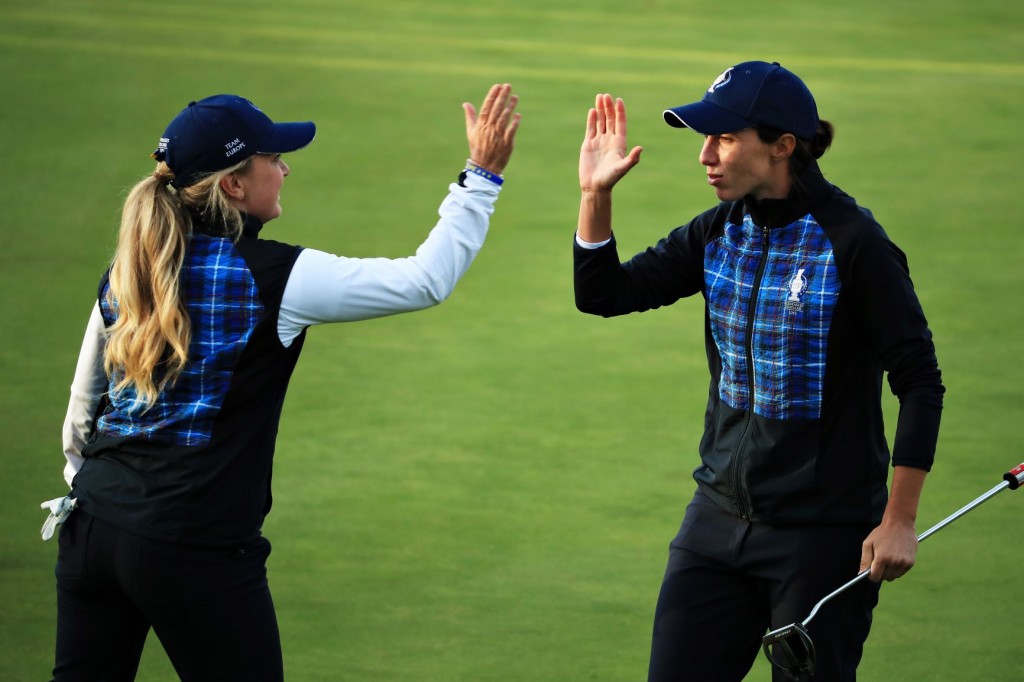 The English-Spanish duo had been up since the fifth hole but their lead – they were four up after 14 holes – was eroded as they lost the last three holes.

Earlier in the afternoon, Ally McDonald and Angel Yin inflicted the heaviest ever Solheim Cup fourball defeat on Anna Nordqvist and Caroline Hedwall, a 7&5 drubbing to level the match.

But the momentum was undoubtedly in favour of the Americans, who at one stage looked likely to lose three of the four afternoon matches.

USA Captain Juli Inkster said: “No one really ever talks about the half point. I have to say those two half points at the end were huge. For two rookies to be four down with five holes left and to come back and tie, you can’t teach that. It’s just in your belly. I’m just so impressed with them. 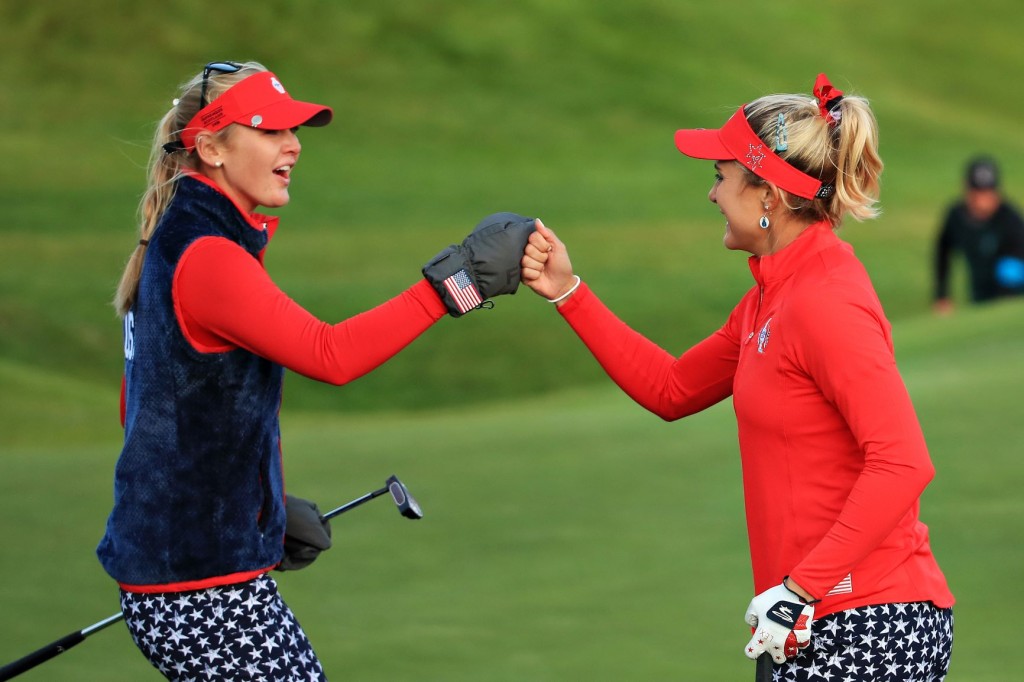 Thompson and Korda high five for Team USA on day one of the Solheim Cup at Gleneagles. Image credit Getty Images

“We’ve just got to keep the Europeans in our rearview mirror, so we can see them. You don’t want to get too far down. It was looking like we could be two and a half points down, but you keep gnawing a half a point here and there and it adds up. You look at all the golf today and we’re only a point down, so I’m very pleased with where we’re at right now.”

Catriona Matthew, the European Captain, said: “I’d be lying if I said it was what we were looking for. But I think you have to take the positives and we’re leading. We’re a point up. If we’re leading at the end of each day, that would be great.

“I think everyone’s a little disappointed, but Charley had a great putt on the last, it was just a little firm. Brittany holed up and made a great birdie. It’s not as if we lost it with bad play; the others birdied it. We’re pleased with going in with a one-point lead.”

In the morning session, having been sent off down the first fairway of the PGA Centenary Course by a deafening crowd, Ciganda and Law, in the first group, finished all square with Morgan Pressel and Marina Alex. Ciganda holed a brilliant putt for a two on the par three 17th and then finished off an excellent up-and-down on 18.

Just behind them in match two, Georgia Hall and Celine Boutier won 2&1 against Thompson and Altomare, but the Korda sisters – Jessica and Nelly – put some red on the board with a thumping 6&5 win over Caroline Masson and Jodi Ewart Shadoff.Ei

In the final match of the session, Hull and Munoz closed out a 2&1 victory over Megan Khang and Annie Park after a tense back nine. 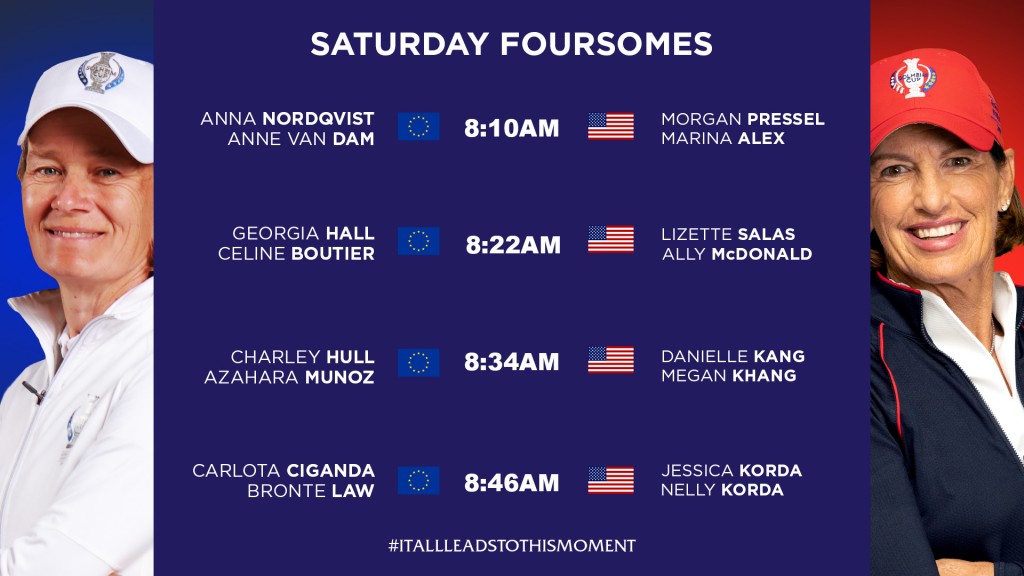