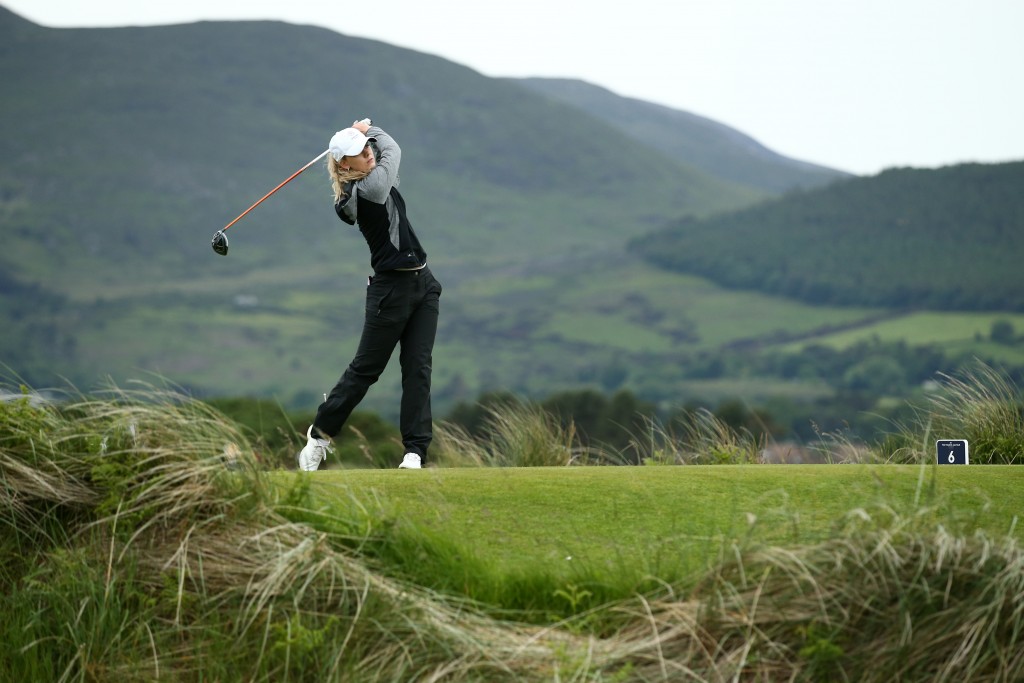 Berkhamsted’s Hannah Screen was the leading qualifier in the British Women’s Amateur Championship at Royal County Down after shooting scores of 69 and 70 to lead on seven-under, with only three players under par. Picture by The R&A / GETTY IMAGES

HERTFORDSHIRE’S Hannah Screen finished as the leading qualifier for the matchplay stage of the 116th Women’s Amateur Championship at Royal County Down.

Following the second round of strokeplay qualifying, the joint overnight leader added a three-under-par round of 70 for a seven-under-par total of 139, on an overcast and breezy day in Northern Ireland.

From a starting field of 144 golfers from 26 countries, Screen led the top 64 players into the matchplay stage over the renowned venue. Nine other players from England made it in the knockout stages, including Irish and Welsh Amateur Strokeplay Champion Lily May Humphries, from Essex,

Screen, a regular winner in the junior ranks, has certainly taken a liking to the course and the spectacular scenery.

The 19-year-old, from Berkhamsted, posted four birdies in her second round and has only dropped three strokes in the 36 qualifying holes.

Screen said: “It feels really good to be top qualifier. I came in today trying to play steadily and I managed to do that, holing some great putts.

“It was harder today as the wind was definitely blowing stronger and also cross-wind on some holes which is so challenging.

“I’ve struggled in the last year by not following up a really good round so it’s nice to finally put two together. I’m excited for the matchplay now.

“My matchplay record is pretty good. I’ll look to stay patient as this golf course is hard and anything can happen,” added Screen, who has just completed her first year at the University of Houston – and who claimed the Daily Telegraph Junior Championship in 2016.

The other English qualifiers included Hertfordshire’s Curtis Cup player Alice Hewson, also from Berkhamsted, who was the lowest ranked seeds in 43rd place after two 76s.

Highest after Screen was Huddersfield’s Charlotte Heath in 11th place with a 72 and 75, while 2018 English Women’s Amateur Champion Georgina Blackman, the Chelmsford player who has recently switched to Hertfordshire’s Brocket Hall, was in 20th spot – see other English qualifiers belolw.

Italy’s Angelica Moresco, who shared top spot with Screen after the first round, also eased through in second place on five-under-par.

Moresco said: “I’m really happy. I struggled a little on the back nine and made two double bogeys in a row at the 13th and 14th.

“I was kind of emotional but I got it back with an eagle on the 15th and a birdie at the last. It was getting tough out there with the rain and the wind.

“It’s a new tournament from tomorrow. I’ll try to be more aggressive but also stick to my strategy.”

American Gurleen Kaur from and New Zealand’s Amelia Garvey were next best to qualify on two-under as only four players finished under par.

Defending champion Leonie Harm, from Germany, progressed on six-over with the top-ranked player in the field – Italy’s Alessia Nobilio – finishing on four-over.

Irish hopes were still alive after Paula Grant and Anna Foster qualified on three-over with Aine Donegan one stroke back on four-over.

Grant said: “Being the lowest-ranked Irish player, it was a big goal just to make the cut. I played well and hit some nice shots so it was a steady two days. I didn’t really get into much trouble which was nice as there is a lot of it out there.

“I’m a member here. I live 40 minutes away and Lisburn is my home club but I’ve played at Royal County Down in the winter as it is such a great course with great practice facilities.

“I know the course quite well and hopefully the local knowledge can help. I’ve been to the quarter-finals of this event twice before and hopefully I can go a little further.”

Italian Nobilio said: “I had a tough day yesterday so I was under pressure because I knew I had to play well.

“I’m very happy with my game and I can’t wait until tomorrow. I’ve played many good tournaments this year and last year so I will look to keep playing well.”

The youngest player to tee it up, 14-year-old Amalie Leth-Nissen, from Denmark, also progressed.

Third seed Amelia Garvey, from New Zealand was getting used to playing links golf on a championship course for the first time.

Garvey said: “This is my first time on a proper links course. I’m getting used to landing the ball short of the greens and it’s been fun.

“I’ve been using my two-iron a lot to keep the ball in play and avoid the rough as it can be hard to control the ball in the wind with the driver.

“I made some really good pars coming in when I needed to which kept the momentum going. Matchplay is a whole different game so I’ll look to use the first two rounds as a learning experience.”

Royal County Down is hosting the event for a ninth time – exactly 120 years since the first staging in 1899.

The cut for the leading 64 players (ties for the last place were decided on countback using the 18 hole second round score) fell at seven-over.

The matchplay stage gets underway on Thursday with each tie consisting of one round of 18 holes including the final on Saturday.

The winner secures spots at this year’s AIG Women’s British Open at Woburn and the 2019 Evian Championship as well as the 2020 US Women’s Open and the 2020 Augusta National Women’s Amateur Championship.

Entry is free of charge throughout the week for all spectators at Royal County Down, while live scoring, news and video can be followed at www.randa.org and on social media.