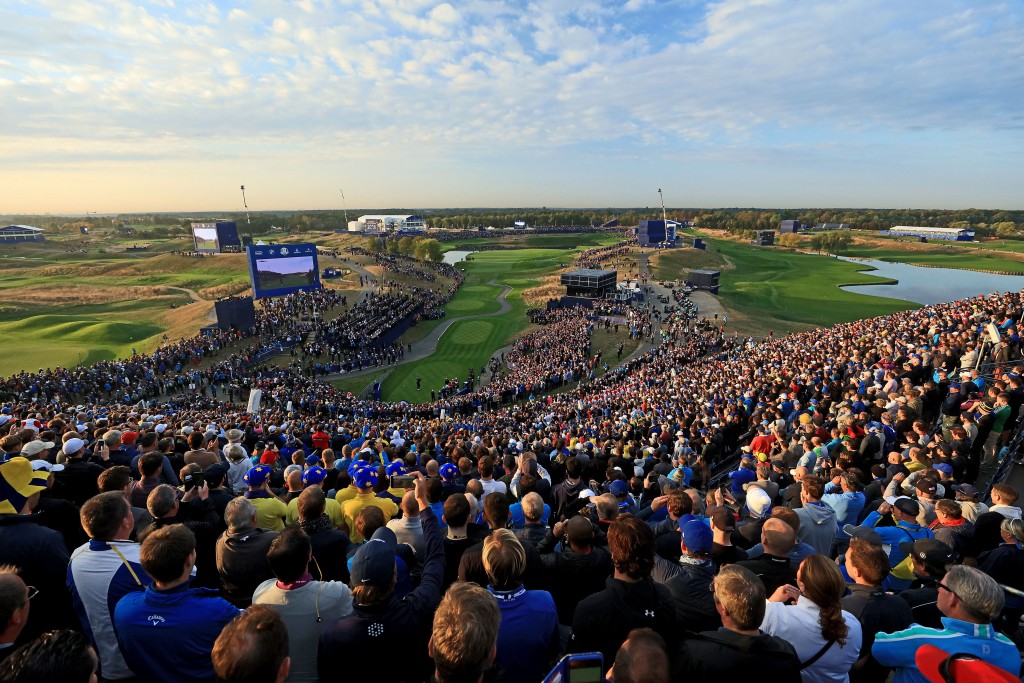 A record crowd of more than 270,000 watched Europe inflict the biggest defeat on the USA in Ryder Cup history – with millions watching on TV and following events at Paris’s Le Golf National via social media. Picture by GETTY IMAGES

THE 2018 Ryder Cup was named Event of the Year at the prestigious BT Sport Industry Awards in London at the end of April.

A record crowd of more than 270,000 fans watched Europe defeat the United States at Le Golf National, Paris, in September – with millions more tuning in around the world on TV.

The biggest event in the golfing calendar also recorded record social media engagement, with more than 22 billion impressions across the week.

It was the most successful Ryder Cup to be staged in Europe, as the biennial contest visited continental Europe for only the second time after Spain hosted it at Valderrama in 1997.

The BT Sport Industry Awards, which took place at Battersea Evolution, recognise the best work from across the sports sector.

The Ryder Cup won the award ahead of Hockey Women’s World Cup, ESL One, Fever Tree Championships, the Grand National and Wimbledon.

European Ryder Cup director Guy Kinnings told Golf North: “We are extremely proud to receive the Event of the Year Award, which is a tribute to all the hard work and dedication of so many people who were involved in making the 2018 Ryder Cup such a resounding success.

“Paris was an iconic host city and the response of fans at Le Golf National and around the world on social media once again underlined the huge appeal of this truly global event.”

It was the second consecutive year the European Tour has been recognised at the BT Sport Industry Awards.

Last year the European Tour took home the Social Media Campaign of the Year prize for its Access All Areas series, which included such videos as Aaron’s Big Day, the Fastest Hole of Golf, the Awkward Reporter and Bad Coaching.

At this year’s ceremony, the European Tour was also shortlisted for Sports Organisation of the Year Award and the Media Content Award for its coverage of the 2018 Ryder Cup.

Official European Tour partner Hilton was nominated for the Event or Competition Sponsorship Award for their collaboration with the European Tour at the BMW PGA Championship at Wentworth.