By Andrew Griffin on 2nd November 2019 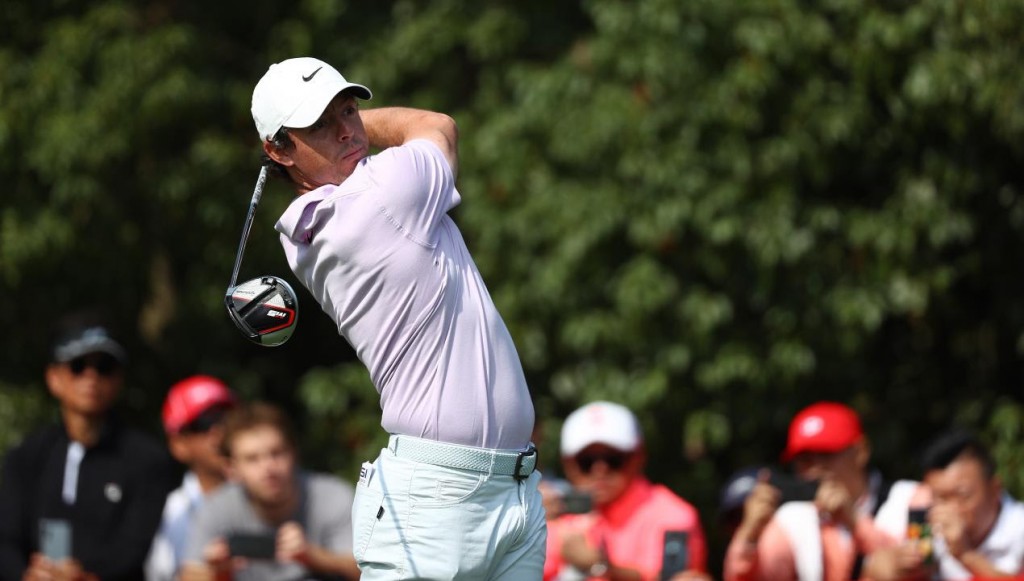 A third 67 in a row gave Rory McIlroy a one-shot lead over Louis Oosthuizen as he chases a third World Golf Championships title in the HSBC Champions, at Sheshan International. Picture by GETTY IMAGES

RORY McIlroy carded a third consecutive round of 67 to take a one-shot lead into the final day of the WGC-HSBC Champions.

The World No. 2 is going in search of a third World Golf Championships title – and went bogey-free to move to 15-under and edge one clear of Louis Oosthuizen.

The South African has a Claret Jug in his trophy collection, but has never won a WGC event – losing out to Australian Jason Day in the final of the WGC-Dell Match Play three years ago.

McIlroy said: “I probably played the best today that I’ve played all week. I drove the ball well.

“Hitting my irons pretty good for the most part. I feel like I didn’t quite get as much out of the round as I could have but I’m not going to complain.

“I’m in the lead going into tomorrow, so just need to rest up and try to get out there and play another good, solid round of golf.

“Right now, the game feels pretty simple. I know that it’s not going to feel like that all the time, but when it does, you have to take advantage of that feeling.

“I’ve given myself another opportunity to win a very big golf tournament, a tournament that I’ve never won before.

“I want to go out there and be committed, play aggressively, and shoot a good number. I took a lot from the win in Canada earlier this year.

“I went out tied for the lead, and I just said from the start, ‘I’m going to keep my foot down and I’m going to go for everything.’

“It was a good lesson that when you do have something right there, in front of you – a tournament to win or something to achieve – you just have to grab it with both hands, and that’s what I’ll do tomorrow.”

A victory for McIlroy would be his first European Tour triumph since 2016.

It would also see the Fedex Cup winner join just Tiger Woods and Dustin Johnson in having won three of the four different WGC events.

The Northern Irishman won his second and latest WGC event at the 2015 Match Play at San Francisco’s Harding Park.

Since then has had nine top 10s in the tournaments, including a fourth top five at Sheshan International Golf Club in 2016.

Oosthuizen will be hoping to be inspired by South Africa’s Rubgy World Cup final, which came after the end of the third round in China.

“It was a very fast start,” said Oosthuizen. “I really struck the ball really good with my irons.

“The driver, I had a few awkward swings out there, but at the end I started hitting it good. So all in all, I feel like I’ve got a really good feel on the greens, and just played really good.

“I think around this golf course, the way the greens are, if you give yourself lots of opportunities, you’re going to make a few.

“They are so pure and so good, the greens. It’s the best I’ve seen them,” added Oosthuizen.

Sheffield’s Matthew Fitzpatrick and defending champion Xander Schauffele were at 13-under, a shot clear of Cheshire’s Paul Waring.

Fitzpatrick, who is looking to extend of winning at least once in each year he has been on tour, said: “It was a bit up-and-down.

“Certainly didn’t have any ‘A Game’ today. Just didn’t feel comfortable really out there with my driver.

“The fairways around here are tough, and that was a bit of a grind. To get in at 13 that was good – you’ve got to be on your game.

“Of course you’re looking at leaderboards, and anyone that says otherwise is a liar. You’ve always got it in your mind, that you know what you need to do, and – at the same time – got to try and stick to the game plan.

“That’s why everybody is here is to win. If not, you may as well go home.

“It will be a good day tomorrow. Unfortunately, Rory is playing very well. He’s playing very annoying. I’ve got to play well, and that’s why it’s a World Golf Championships. It’s got the best players in the world.”

Sungjae Im and Jason Kokrak were at 11-under, a shot clear of Abraham Ancer and Kevin Kisner – and two ahead of another South African – Christiaan Bezuidenhout.

•For live scoring in the fourth round of the HSBC Champions click here.