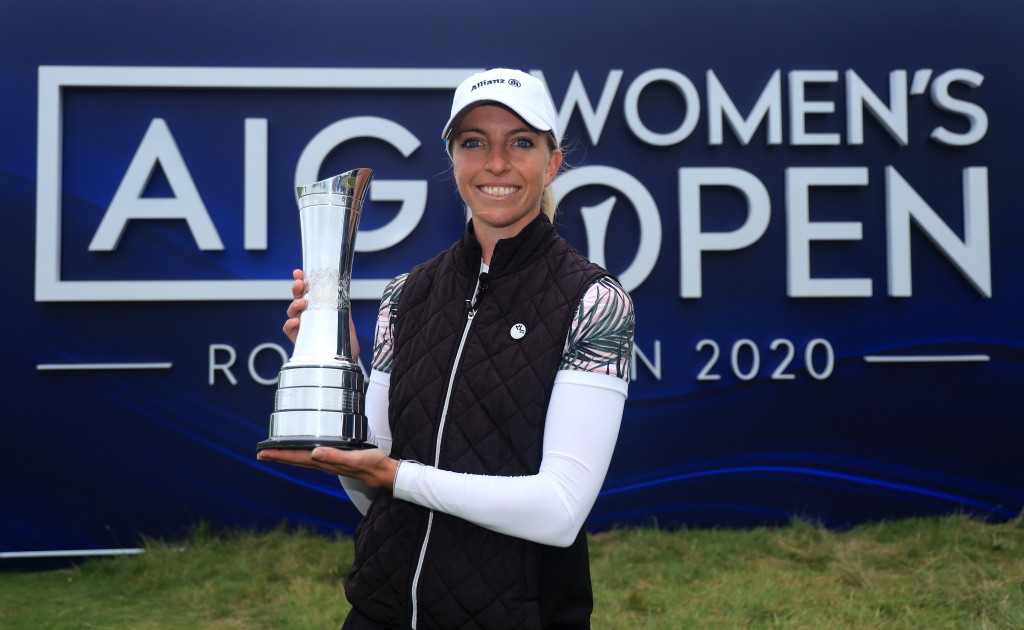 Germany’s Sophia Popov – ranked 304 in the world – completed a fairytale two-shot victoy in the AIG Women’s Open at Royal Troon. Picture by THE R&A

GERMANY’S Sophia Popov made history with a life-changing two-shot victory at the 2020 AIG Women’s Open at Royal Troon.

She closed with a magnificent final round of 68 to finish at seven-under par and claim the $675,000 first-place prize.

Looking unfazed throughout, Popov, who lead by three-strokes overnight, came into the week ranked 304 on the Rolex rankings.

By the end of it, she became the first German to win a women’s major championship and the highest-ranked player to capture the historic championship.

Popov said:“It is an incredible story, something I could not dream of a week ago.

“It is incredible that golf allows these things to happen and as one of 144 players this week, I just happened to have the week of my life.

“It is probably the best golf I have ever played.”

After the COVID-19 crisis forced the LPGA and Symetra Tours to shutdown, Popov played the Cactus Tour in America’s south west… she won three times in a month.

And the last of those wins came at.. you guessed it Troon North, at Scottsdale, Arizona.

From Cactus Tour to Royal Troon

THREE weeks ago the 27-year-old could never have dreamed of this moment as caddied for her best friend Anne Van Dam at the LPGA Drive On Championship.

Popov only qualified for the WBO courtesy of a tied ninth finish a week later.

A runner’s-up finish in Arizona last week on the Symetra Tour gave her some confidence – but no one predicted such a triumph, least of all Popov.

She said:“Everyone said, ‘how are you playing in Phoenix the week before The Open?’

“I said, ‘you know, my focus this year was still the Symetra Tour and that was more important to me as far as the Money List goes.’

“And I said, ‘I’m going to stick with the schedule that I had.’ The AIG Women’s Open to me was a bonus and I got here on Tuesday.

“I said ‘I know my game is in really good shape and anything’s possible.’ I think I took that belief with me to every round but I never expected this.”

Popov, who has her boyfriend on the bag, stumbled initially with a bogey at the first hole.

But she immediately bounced back with gains on the second, third and sixth, as Thailand’s Jasmine Suwannapura reeled her in with four consecutive birdies from the fifth hole.

Keeping her nose in front by one, Popov took control on the back-nine, helped by a pair of Suwannapura bogeys.

She stamped her authority on the tournament with a crucial par save from 10ft on the par-four 11th hole before making birdies on the 15th and 16th to take her to eight-under.

Tears flow as Popov realises her dream on 18

HOLDING back the tears on the 18th green, Popov defied the odds and triumphed against a world-class international field.

And despite a closing bogey, she was overwhelmed when her fellow professionals stormed the green showering her with Champagne.

“I’m glad I didn’t think about the prize money going down the 18th hole,” she smiled.

“But I was a lot calmer than I thought I would be throughout the day. When I hit the green on the 17th, that is where the tension came in.”

Reflecting on the victory, Popov added: “It feels amazing. There’s a lot of hard work behind it, and a lot of struggles that I went through the last six years, especially health-wise.

“I’m just glad I was able to overcome everything and just keep my head in it. I think we are going to have a thorough celebration at the hotel, social distanced of course.

“But as soon as I get home, it will be a little more extensive.”

Suwannapura’s highest-ever finish in a Major

THAILAND’S Suwannapura recorded her highest finish in a Major, ending the tournament in solo second after a four-under round of 67.

She was followed closely in third by Australia’s Minjee Lee, who completed her week with a 69.

Seven-time major winner and former AIG Women’s Open champion Inbee Park, who won at nearby Turnberry, was a further two strokes back in solo fourth.

The 2015 champion threatened to play a bigger role in the early afternoon with five birdies on the front nine.

Unable to replicate that form on the back nine, Park made two further birdies and bogey on the 12th to shoot a final round 66.

Denmark’s Emily Kristine Pedersen increased her lead in the Race to Costa Del Sol rankings with a tied 11th finish.

She is more than 75 points ahead of her nearest rival, Spaniard Azahara Munoz, who jumped up from fourth place, courtesy of a top 40 finish.

•For full results at the AIG Women’s Open click here.