DERBYSHIRE’ Bradley Moore has won The HotelPlanner.com Championship at Frilford Heath by two shots for his first-ever professional win on the Blue Course.

The Kedleston Park Golf Club ace posted rounds of 65, 69 and 67 to see off strong competition from playing partner Nick Poppleton – who won the Brabazon Trophy at Frilford a year ago – and Hampshire rookie Ryan Harmer.

It was a good week for Moore, who was leading overnight before the completion of the rain-delayed round two.

Bettering his second-place finish after a play-off defeat against Sean Towndrow at Caversham Heath Golf Club two weeks ago, Moore said: “I’m over the moon.”

Overstruck with emotion, the former England amateur international added “I thought it was going to be a grind.

“Me and Nick had a two and three-shot lead most of the round, so it was just one of them where if I kept doing what I was doing all week, I was in a good position to do that more easily than Nick possibly.

“I almost snuck in the backdoor really in the last six holes there,” said the former England U14 and U18 champion, who won both the Reid and Carris Trophies.

“I’ve been playing well for a while now. I lost in a play-off but I wasn’t too disappointed about that.

“I knew that if I put myself in the position again to get it over the line. It’s my first professional win.”

He paid tribute to his caddy. “Tom’s had most of the week off work. He only thought he was coming down for one day,” said Moore.

“I think he’s had the same pair of boxers for three days. It’s been a top effort for him.

“His dad had a stroke at the start of the year and he’s always been a big supporter of mine.

“It happened in March and he’s come through it. He’s doing really well but like I say it’d be great to have him here.

“We’ll go home and I think the trophy will stay with him tonight,” Moore added. 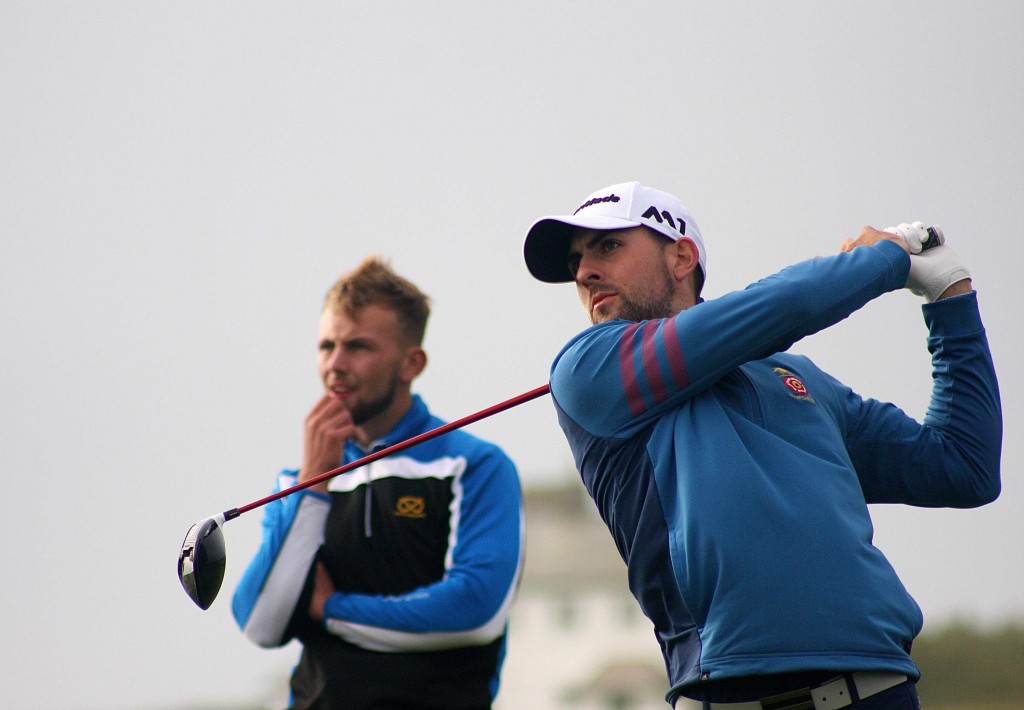 Harmer, from Brokenhurst Manor Golf Club, came up strong to finish second with rounds of 68, 68 and 67 for his best finish on Tour, after his earning his card at Frilford in April, including four birdies and an eagle.

Harmer was part of the Hampshire team that won the English County Championship for the first time in 21 years, two years ago, at Trevose GC.

Poppleton, from Yorkshire’s Wath Golf Club, faded away after holding a two-shot lead at one point with a few bogeys on the back nine to open the door for Moore.

He finished third on Frilford’s Blue Course – he won the Brabazon at the English Amateur Strokeplay Championship playing three rounds on the Blue, and one on the Red.

Ben Ferguson, from The Vines, and Welsh pro James Frazer, who is attached to Machynys Peninsula, tied for fourth on 10-under.

Both Frazer and Ferguson had five birdies and an eagle to their name.

On a day which started with the completion of the second round due to bad weather on Wednesday, Poppleton completed a five-under par 67 to lead going into the final round.

Daniel Jennevret started the third round towards the front after a good early morning finish, as the cut fell at one-under with fifty-four players teeing off on a shotgun to ensure a full final round in the best conditions possible.

It paid off with a scorching final day and home favourite Olly Huggins, who is still at an amateur at the Oxfordshire club where European Tour winner Eddie Pepperell is a member, finished seventh.

His second succsssive round of 71 rounded off an impressive week for Huggins, while Frilford assistant pro Robert Harrhy, who also carded back-to-back 71s was a further shot back tied for eighth with Liam Murray.