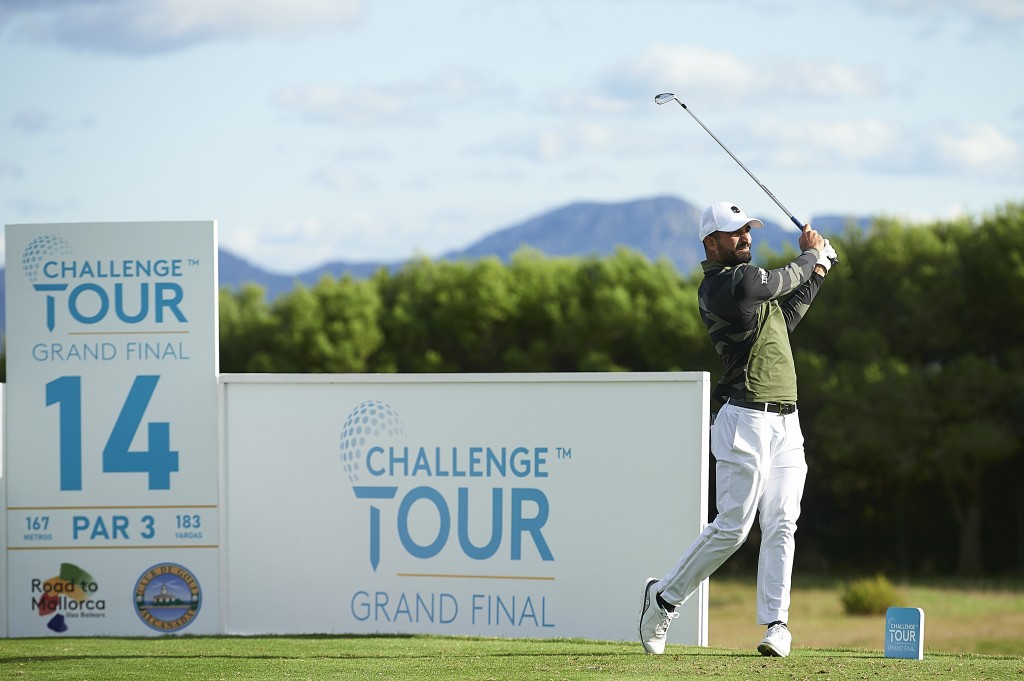 FRANCESCO Laporta held on to his narrow lead at the halfway stage of the Challenge Tour Grand Final, at Mallorca’s Club de Golf Alcanada.

Laporte’s round moved him to five-under in total, one stroke clear of Spain’s Sebastian Garcia-Rodriguez and two ahead of Frenchman Robin Sciot-Siegrist.

But Surrey’s Ross McGowan posted a bogey-free 66 to move into sixth with a further move up the leaderboard in his sights on Saturday.

McGowan who won the 2009 Madrid Open on the European Tour and has three more wins on the Challenge Tour to his name, said: “The greens were slower today.

“The wind was probably a bit stronger yesterday and the greens were quicker. I think I had four three-putts and really struggled on them.

“Today, I putted a lot better,” said the Banstead GC member who lost his card on the European Tour back in 2011, but won the D+D REAL Czech Challenge in May.

“The wind was still up pretty early doors. I had to hit three-wood into the first after a good drive, whereas yesterday we had pretty calm conditions during the first few holes,” said McGowan.

“The wind was going in a different direction today and it made a few holes on the back nine a little bit easier.

“I think 13 and 14, which were really tough yesterday, were easier today because we could hit irons in there – and it was much more favourable.

“I need two more of the same over the weekend and I’ll take that right now,” McGowan added.

“I think I’ve just got to carry on what I was doing today. I had much more focus and with the greens, I was seeing the speed a lot better.”

The low round of the day – and the week so far – belonged to Somerset’s Laurie Canter, who bounced back from an opening round of 80 with a 65.

After 36 holes on the Balearic island, current projections show the top 15 – who will earn a European Tour card for 2020 come Sunday – would be unchanged if the tournament were to have end this afternoon.

Darius van Driel is still clinging onto the last card, but several players have given themselves a shot of glory with two rounds remaining over the weekend on the Spanish holiday island.

Scotland’s Ewen Ferguson is the man best-placed to break into the graduation spots.

The Glasgow Walker Cup player’s second consecutive level par round of 71 moved him into a tie for seventh place heading into the weekend – and 16th on the Road to Mallorca rankings, just 4,854 points behind van Driel.

But Laporta, the winner of last month’s Hainan Open, in China, is the man they have to beat to earn the biggest winners’ prize of the season.

Laporta, who has only missed the cut once in his last 16 events, said: “It was a bit more windy today.

“We had the wind for the entire 18 holes, whereas yesterday it came down for around five or six holes.

“It wasn’t easy – the greens were a bit slower and less firm. There were some tough pin positions and the other guys played solid, so it was a good game.

“Everyone enjoyed the round and we had a good fight. Hopefully we’ll have another good fight tomorrow.

“But on the back nine I played lovely. I had two chip-ins, on the 13th and 15th and the rest of the holes I played so well,” said the Spaniard, who would love to win on home soil.

“I just stuck to the process to turn it around today. Check the wind, make a good swing – that was my key. There will be a lot of people here this weekend cheering me on, why not go for the win?”

SCIOT-Siegrist knows the race to be crowned overall champion will almost certainly go to the wire, especially if the winds which were forecasted to reach 30mph on Friday, turn out stronger than the 10mph expected over the weekend.

“Anything can happen, literally. I know I’m far off in the rankings and that I need to finish top two or better,” said Sciot-Siegrist.

“But I came here this week knowing I needed to finish top two and I started to play well a couple weeks ago – and then seeing this course… I like this course.

“There are just a lot of things that tell you that something can happen, but it’s the top players on the Challenge Tour playing this week and you know it’s going to be tough… but we’ll see.

“There’s a lot of wind and the course is very tricky. I struggle on easy courses because target golf is not really something that I do very well.

“This is just the kind of course that makes you frustrated, you need to think a little bit about your shots, and then the wind comes in, it’s like a British Amateur.”

Germany’s Sebastian Heisele and Royal Liverpool’s Matthew Jordan, who both looked to have secured their European Tour playing privileges for next year, share fourth place on two-under.

The third round at Club de Golf Alcanada will begin at 7.30am GMT, with the top three of Laporta, Garcia Rodriguez and Sciot-Siegrist making up the final group who go out at 10.05am.