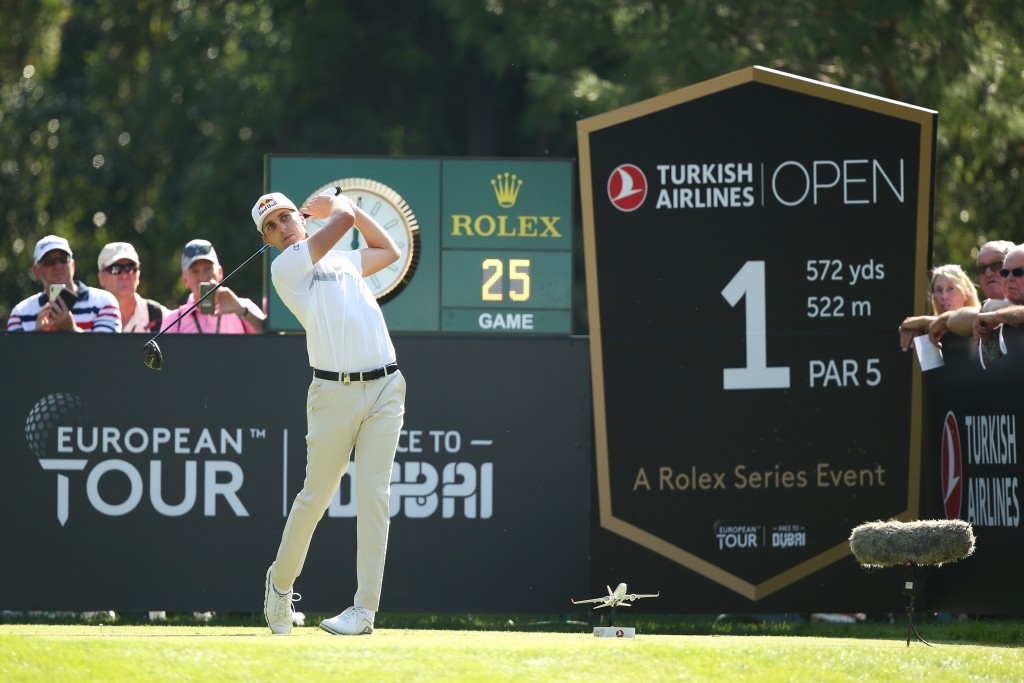 Matthias Schwab eagled the first at The Montgomerie Maxx Royal on his way to a 12-under total at the halfway mark in the Turkish Airlines Open. Picture by GETTY IMAGES

MATTHIAS Schwab maintained his position at the top of the Turkish Airlines Open leaderboard after another low-scoring day at The Montgomerie Maxx Royal.

Reed – nicknamed Captain America after his heroic performances in his Ryder Cup debut at Hazletine in 2016 – carded a seven-under par 65 to move to nine-under, just three strokes behind Schwab.

“It means so much to me,” said Reed. “Representing our country and wearing red, white and blue is something I absolutely love and am so proud of.

“To be able to go out and get a pick, especially from captain Woods, was amazing,” added the 2018 Masters Champion.

“The big thing, and what I always was preaching, as well as what he was telling all the guys is, hey, go out and play good golf.

“Playing well takes care of everything. I was able to do that this last couple months. I was able to get on the right side and get the game in form and play the way I’m supposed to be playing.

“And because of that, I was lucky enough to be able to get a pick. Now the big thing is now that I’ve got a pick is go out and try to earn points for captain and go bring back the cup.”

Austrian Schwab started the day in a share of the lead at the sixth Rolex Series event of the 2019 Race to Dubai.

But after the redraw for the second round, a number of golfers quickly made their move up the leaderboard – with 10 competitors finishing the day on 10-under par or better by the close of play.

Schwab, who got off to a fast start picking up two shots at the first, said: “I wasn’t really hitting them great at all, especially early on but kept it together.

“Obviously the start was good with an eagle on the first hole, but then it was not very nice to watch I think.

“The long game wasn’t on but I managed to make a few good pars. On the back nine I found my swing a little bit and made a few good birdies coming home.

“Every made putt is important. I had a few good par saves on the previous holes, too, but the one on nine kept the round going a little bit.

“It was just keeping it together and I made a few good pars, especially on nine where I hit it on in the water off the tee and scrambled to make par.

“Then on the back nine I was better with my long game. I had a few good looks and was able to make some.”

Twenty-four-year-old Schwab leads the standings in the highest number of top 10 finishes on the European Tour this season, with nine.

Schwab has five top 10s in his last eight starts, including a share of fourth place finishes at the Italian Open, and his debut World Golf Championships appearance at last week’s WGC-HSBC Champions in Shanghai.

He birdied the last to move to 12-under, one stroke ahead of Thomas Detry, who finished third at this event last year, former Wentworth member Ross Fisher and two-time Rolex Series winners Alex Noren and Danny Willett.

Willett has two Rolex Series wins under his belt after his victory in the BMW PGA Championship at Wentworth, in September.

The 2016 Masters Champion was happier with his performance in round two.

“A lot better than yesterday,” said Willett. “Real solid. Didn’t really give ourselves too many silly things. Had a couple of three-putts in there which was slightly annoying, but a nice score to build on over the weekend.

“We’re making some good moves. Trying to keep doing the same. Golf course is there for the taking.

“Going to see a lot of low scores. You’ve just got to hope that someone doesn’t go too crazy over the weekend and hope you’re still in there with a shout with 18 or nine to play,” Willett added.

“I said at the beginning of the week, it could be at least 20-under par winning this tournament – and it’s right on track for that.

“You just have to keep your foot down and keep trying at birdies and see what you can do.”

Noren is looking for his first win since last year’s French Open at Le Paris National, where he made his Ryder Cup debut two months later.

Noren said “On the front nine, I played the best I can play pretty much, and the back nine, I had a lot of chances.

“The short game kind of went on me a little bit. I’m happy with 11-under total. See what the weekend has.

“Yesterday, I played probably the best I’ve played, and today the front nine was amazing. So I take out a lot of positives.

“You know, if somebody said you get 11-under after two days, I’d take it. I just have to refocus and not think of what it could have been today – but that’s how it is.”

Defending champion Justin Rose, who is bidding to become just the fourth golfer to win a regular European Tour event three years in a row, shares sixth place with four others on 10-under.