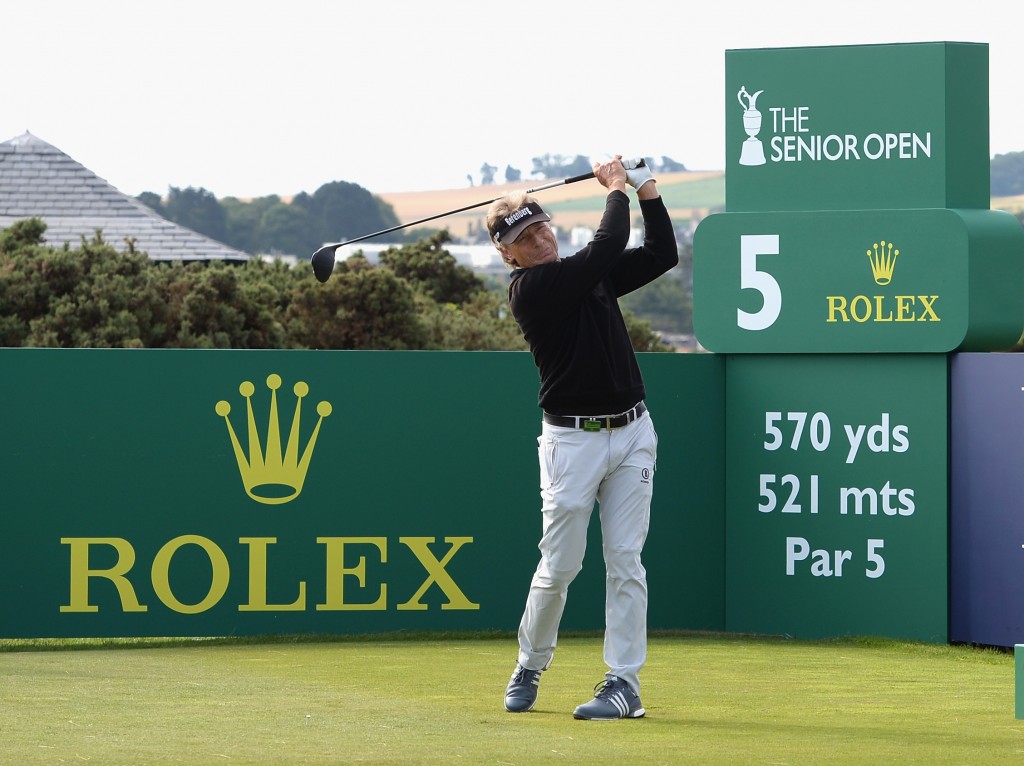 Former Ryder Cup-winming captain Bernhard Langer is looking for a fourth Senior Open when the Over 50s Major returns to Royal Lytham & St Annes, in July. Picture by GETTY IMAGES

The 61-year-old won a record-breaking 10th Senior Major Championship at The 2017 Senior Open at Royal Porthcawl, adding to his first victory there in 2014 and his first Senior Open crown at Carnoustie in 2010.

The 2004 European Ryder Cup Captain has fond memories of the Lancashire links, having recorded one of his four third-place finishes in The Open when he finished four stroked behind David Duval at Royal Lytham & St Annes in 2001.

“I like links golf generally and Lytham is a fair and testing golf course,” said Langer. “It’s a fun course to play and it will be fun to come back to the UK to play in The Senior Open.

“We don’t get much of a chance to play links golf – we don’t have many links courses in Germany and there are none in Florida, so I’m always excited when I get an opportunity to play on courses like these.

“It’s fantastic having Rolex involved – they are a wonderful sponsor. I’ve been with Rolex for many, many years; they are great supporters of the game of golf, so this event is one my highlights every year.”

Langer has showed no signs of slowing down, having narrowly missed out on back-to-back Senior Open titles last year, finishing one stroke behind eventual champion Miguel Ángel Jiménez. The two-time Masters Tournament champion also won his 39th title on the PGA Tour Champions circuit earlier this season at the Oasis Championship in February.

“It was a good battle with Miguel,” added Langer. “He made a great par on the 17th to stay ahead. I came within one but he managed to pull it off.

“It’s one of our Majors, so I enjoy it very much. I always enjoyed playing The Open and The Senior Open is the next best thing for us.”

Langer is just one of a host of European Ryder Cup Captains, Major Champions and European Tour winners competing at Royal Lytham & St Annes, from July 23-26.

He, alongside the likes of Paul McGinley, Colin Montgomerie and Ian Woosnam, will go toe-to-toe with defending champion Jiménez in the field at Royal Lytham & St Annes as the stars of the golfing world descend on the North West of England for Europe’s only Senior Major Championship.

Leading the American contingent at the 33rd edition of The Senior Open will be former Champion Golfer of the Year Tom Lehman, who won The Claret Jug at Royal Lytham & St Annes in 1996.

Do not miss your chance to watch Miguel Angel Jiménez defend his title against the world’s best over-50s golfers. Tickets start from £13.50 and are available here. Hospitality options in The Lehman Lounge are also available here.

Entry for Under 16s and parking are free.

About The Senior Open
The Senior Open, presented by Rolex, will return to Royal Lytham & St Annes for the first time since 1994 when the 33rd edition of the Championship is staged in July.

Miguel Ángel Jiménez became the third consecutive European winner of The Senior Open after his one stroke victory over defending champion Bernhard Langer on the Old Course at St Andrews in 2018. Paul Broadhurst started the run of European victories at Carnoustie in 2016.

In 2017, Langer became the first golfer in history to win ten Senior Major Championships, as he joined Gary Player and Tom Watson as the only three-time winners of the Senior Open Trophy with his victory at Royal Porthcawl Golf Club in Wales.

The Senior Open was introduced in 1987 at Turnberry in Ayrshire, Scotland when Neil Coles, the former chairman of the board of directors of the PGA European Tour, won the inaugural title. That led, two years later, to the formal inception of the European Senior Tour. In 2018, the Senior Tour was rebranded with Staysure becoming the first title sponsor of what is now known as the Staysure Tour.