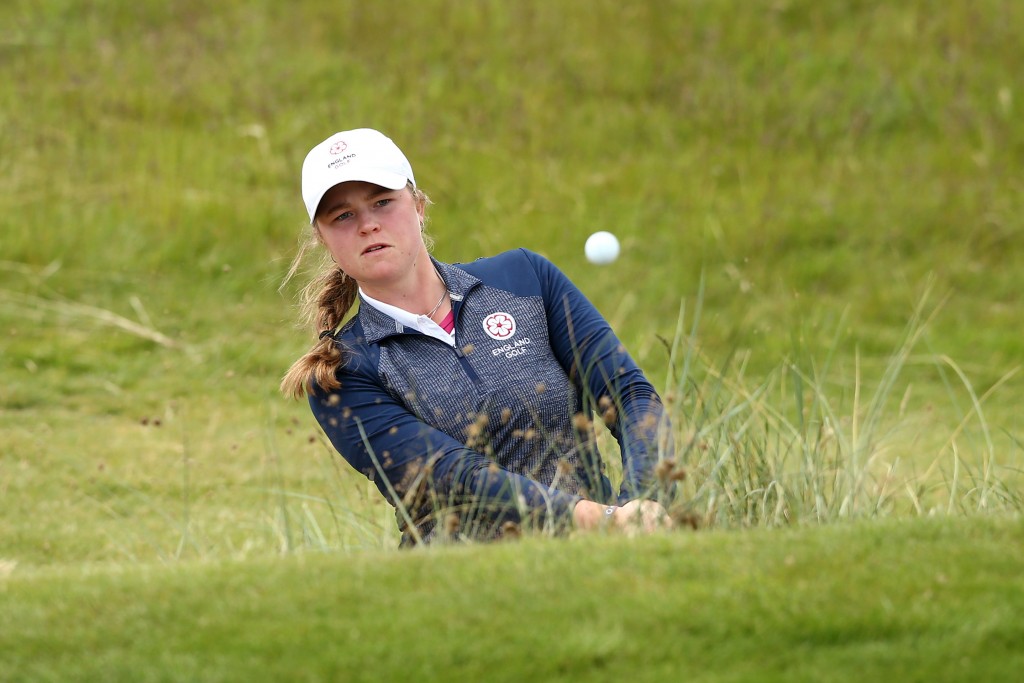 Euphemie Rhodes, from Somerset’s Burnham & Berrow, hit the heights in the second round of the British Women’s Amateur Championship, knoocking out No. 1 seed Hannah Screen, at Royal County Down, in Northern Ireland. Picture by The R&A / GETTY IMAGES

EUPHEMIE Rhodes. from Somerset, edged out top qualifier and England team-mate Hannah Screen to seal a place in the last-16 of the Women’s Amateur Championship, at Royal County Down, on Thursday.

The 17-year-old, from Burnham & Berrow, showed experience beyond her years to defeat Elena Moosman by two holes in the last-64 match play stage before winning at the first extra hole in another close content with Screen.

Rhodes, a member of the England girls’ team, had to change her flight plans home from Northern Ireland as she looked forward to meeting Alessandra Fanali in the third round.

Rhodes said: “I’m really happy as it wasn’t easy against Hannah. She is one of my best mates at England Golf so it was quite hard.

“I was two down after two holes but then won five holes in a row. I lost my swing a bit in the middle of the round and started missing shots.

“But my putter was working really well and I holed a few putts before getting my irons back towards the flags.

“It would mean the world to win the championship but I can’t think that far ahead. I’m hitting the ball really well so hopefully tomorrow can be another good day.”

Screen, from Berkhamsted, had shot a second round 70 to top the leaderboard with a seven-under total, to take the top seed’s spot in the draw for Thursday’s two rounds of knockout.

Fanali, part of the Italy side that won the team award after two rounds of strokeplay qualifying, knocked out Chloe Goady to keep Italian hopes alive after the exit of Angelica Moresco, the runner-up in stroke play qualifying.

Fanali said: “I had a good day. I played really well this morning but it was hard in the afternoon with the wind.

“My bad shots were generally OK so I avoided real trouble. Two years ago I reached the quarter finals of the championship so it’s good to play well again.

“As an Italian team, we are all helping each other – we are a great team. I just need to keep playing well, control my ball in the wind and stay patient.”

On a windy and cold third day on the east coast that produced a number of other notable results, Moresco was beaten by Min A Yoon, from South Korea, by two holes.

There was also a fine win from Zhen Bontan as the two-time Netherlands Women’s Champion beat Irish hope Anna Foster by two holes in their last-32 tie.

Dutchwoman Bontan said: “It was harder in the afternoon in the wind than the morning. I got ahead early on against Anna which was important in such a tight match and managed to hold on.

“This is the furthest I’ve ever been in the championship. I missed the cut last year at Hillside so this is a great thrill.”

Equally impressive was the victory from Kiira Riihijärvi over in-form Lily May Humphreys. Essex-based Humphreys, the winner of the Irish Ladies Open Strokeplay Championship last month, went down to a 3&2 defeat against the Finn.

Rihijarvi said: “I knew Lily had been playing well so it was a nice win. The second 18 holes were definitely harder as I was more tired and the wind picked up but I did what I had to do.

“I’ve never played in the Women’s Amateur before so it has been a great experience. I’ve played pretty smartly as it is a tough course.

“You have to learn what you can and can’t do and where you can’t miss it. I’ve learned to play it pretty well so that has been the key. It’s challenging but it’s also fun.

“This is probably a career highlight, reaching the last 16, and let’s see what happens tomorrow.”

There was double defeat for Berkhamstd as Alice Hewson, the Hertfordshire club’s Curtis Cup player, who plays for Clemson University, was beaten 5&4 by Cheshire teenager Isobel Wardle.

During the last-64 ties other high-ranked players also lost out. Defending champion Leonie Harm exited after a 5&4 defeat to Linn Grant, the leading player left in the field at 25th in the World Amateur Golf Ranking.

Alessia Nobilio, the top-ranked player at the start of the championship, also lost out at the first extra hole to Maria Herraez-Galvez, while Fiona Liddell secured a 2&1 win over the reigning Girls Amateur champion Emma Spitz.

Liddell and Grant continued their progress in the afternoon, reaching the last-16 with victories over Marie Lund-Hansen and Emilia Tukiainen respectively.

In the penultimate game of the day, Irish hopes ended after Paula Grant was defeated 2&1 by Amalie Leth-Nissen, the youngest player in the field aged 14.

The winner after Saturday’s final secures spots at this year’s AIG Women’s British Open at Woburn and the 2019 Evian Championship – as well as the 2020 US Women’s Open and the 2020 Augusta National Women’s Amateur Championship.

Entry is free of charge throughout the week for all spectators at Royal County Down, while live scoring, news and video can be followed at The R&A’s website – www.randa.org – and on social media.