By Andrew Griffin on 24th September 2019

IRON Golfer Luke Willett is aiming to complete a unique 10-day golfing challenge to cycle to all 14 Open Championship venues carrying his clubs on his back and playing a full 18 holes on each course.

He has carved out a reputation for taking on remarkable ironman-style golfing tests. Now Luke’s latest goal is to play 252 Open Championship holes during an 804-mile bike journey around the UK in ‘The Great British Open Challenge.’

The odyssey for Luke will start at Carnoustie, in Scotland, on October 18, and end 10 days later at Kent’s Royal Cinque Ports, in Deal, and finally Prince’s and Royal St George’s Golf Club, next door.

In between he will “Sandwich” in trips to Royal Portrush, in Northern Ireland, by ferry, and back across the Irish Sea to Royal Liverpool’s Hoylake, Southport’s Royal Birkdale, Royal Lytham and St Anne’s – all in the North West.

The first part of the route around Scotland takes in Prestwick, Turnberry and Troon, in Ayrshire, Edinburgh’s Musselburgh and Muirfield and of course St Andrew’s the Home of Golf.

Thirty-four-year-old Londoner Luke will be fundraising for the Golf Foundation – the national charity working to change the lives of young people by introducing them to golf.

Supported by the Golf Foundation’s team, Luke hopes to play each 18 holes with a mix of junior players, top amateurs, professionals and club members.

All funds raised will go directly to helping more young people from all backgrounds to Start, Learn and Stay in the sport.

PGA coach Luke has been based for the last three years at Hampstead Golf Club, in north London.

He wants golfers who have links with each venue to support him with a donation as he plays.

And he hopes all golf-lovers who understand the need to encourage the next generation of young players, will support him through his Great British Open JustGiving page.

“I am a great believer that golf is more than just walking around a course and playing 18 holes,” said Luke.

“Adventure is waiting to be added to the whole experience either before, during or afterwards.

“I believe this challenge will help make the sport more appealing to young prospective players and will ignite their imaginations.

“I’m delighted I will be able to raise valuable funds for the Golf Foundation.

“We all want more young golfers in Britain and all the money I collect will go towards getting them playing the sport.”

Luke has already made an attempt at the Speedgolf world record – his personal best is 121 – time in minutes plus score – for 18 holes.

In 2018, he putted and chipped through famous London streets such as Oxford Circus and then completed ‘The Iron Golfer Challenge’ – a three-mile swim in Wast Water at the foot of Scafell Pike in the Lake District, followed by a gruelling ride that took in England’s steepest road Hardknott Pass and finished off with 18 holes at Windermere Golf Club, all in a single day.

He also completed his own ‘Golfing Coast to Coast’ – cycling 130 miles from Silloth-on-Solway Golf Club, in Cumbria, to Goswick Golf Club by the North Sea.

Vanessa Bell, head of fundraising at the Hertfordshire-based Golf Foundation, said: “Luke has a vision to introduce golf as more than a game: it’s an adventure.

“His efforts to make golf fun and appealing to entice more youngsters into the game fits exactly with the values of our charity.

“We are thrilled Luke is undertaking this new challenge in support of the Golf Foundation and the funds raised will go into supporting our activities to engage with more youngsters through golf at the grass roots level.

“It would be fantastic for as many people as possible to support Luke and donate to this cause.”

You can sponsor Luke by clicking here. 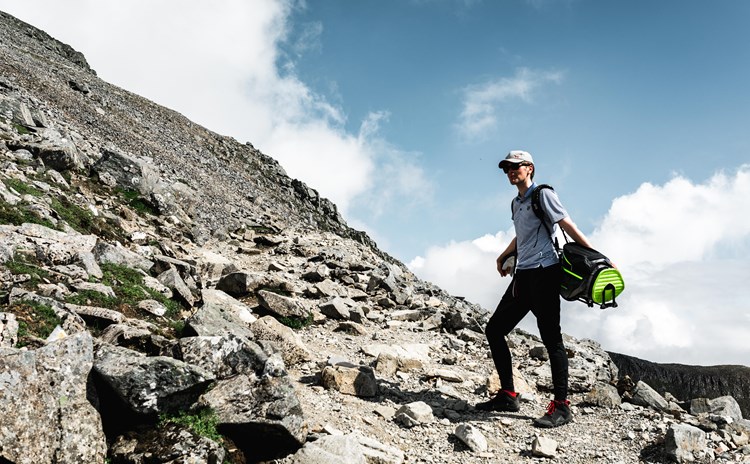 Iron Golfer Luke Willett, from Hampstead Golf Club, in North London, will play all 14 courses that have hosted the Open Championship, and cycle 800 miles over 10 days in October. He has already climbed Scafell Pike and played golf at Silloth-on-Solway after swimmng three miles in Wast Water, in one day in the Lake District. Picture by FRASER TAYLOR

Haway the lads! Why in Toon City of Newcastle are bound for another crack at Europe
Why Open Champion Shane Lowry loves Dunhill Links and has eye on Race to Dubai