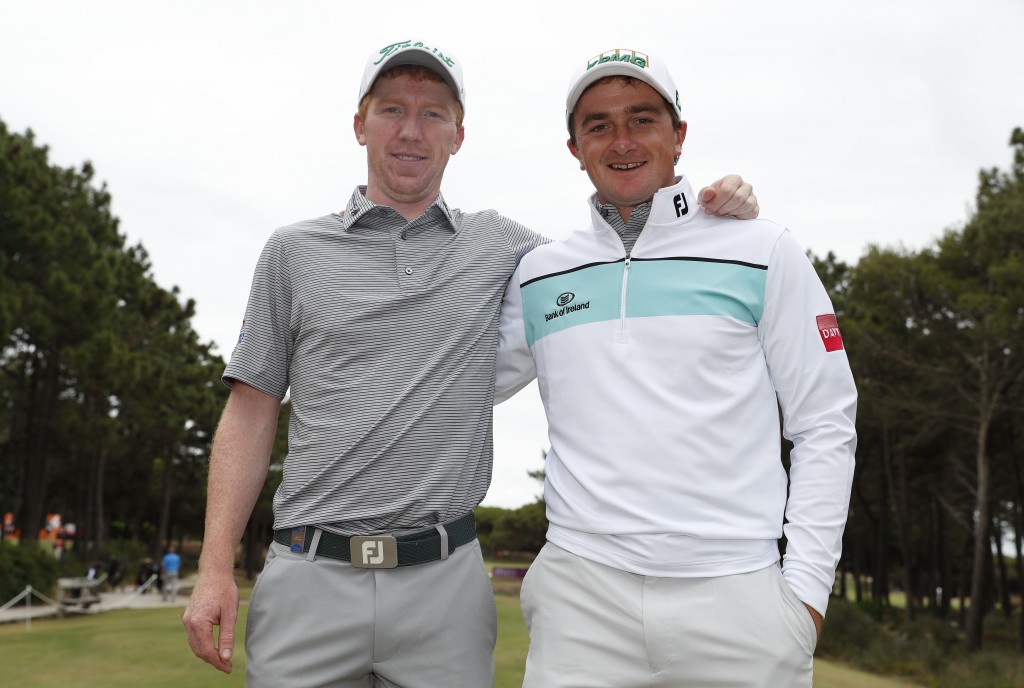 Paul Dunne and Gavin Moynihan (left) are looking forward to defending their GolfSixes title at Oitavas Dunes, in Portugal, but face strong competition from a string of Ryder Cup players. Picture by GETTY IMAGES

PAUL Dunne and Gavin Moynihan will tee off their title defence for Team Ireland at the GolfSixes Cascais today (Friday).

They will be up against an England Women’s team featuring Ladies European Tour stars Meghan MacLaren and Florentyna Parker, as the innovative event makes its first appearance on continental European soil.

The Portuguese coastal region of Cascais, and Oitavos Dunes Golf Club, host the fun and inclusive six-hole format which proved so popular in its first two years in England, with 16 nations battling it out over two days in team match play with modified Greensomes.

The opening day will be played in a round-robin format, featuring four groups of four, and the top two teams in each group will progress to Saturday’s knockout stages when an action-packed day eventually produce.

Three former Ryder Cup winners are in the field, with Jamie Donaldson joined in Team Wales by Stuart Manley, Scotland’s Stephen Gallacher paired with David Law and Team Italy led by Edoardo Molinari – who is joined by Lorenzo Gagli.

Team Ireland’s Paul Dunne said: “It’s set up for a fun format for the week. There’s good will between all the competitors. Once we get on the course we’re going to want to win but it’s a good festival atmosphere around it. The weather helps when you’re in the sunshine.

“It’s a week we’re looking forward to, the format sets up quite well for myself and Gavin and hopefully we can do what we did last year but you just never know over six holes.

“There’s a bit of strategy involved but I think you just play it as it comes, certain people are more comfortable hitting second shots into certain holes.

Team-mate Gavin Moynihan said: “It’s very different to last year, last year there were a lot of drivers and you could just be very aggressive off the tee.

“This year there’s a lot of three-irons or three-woods and you just position it, really. You’re not going to have long shots in for your second shots so you just have to be in the fairway and give yourself a look on each hole.

“I think it sets up well for us because hopefully it will be windy each day as well. We’re looking forward to the week.

“I’ve been looking forward to this for the last few weeks. It’s always great playing team golf, even going back to the amateur days, playing home internationals and Walker Cup, they’re just a great week.

“Obviously the golf is the main event but you just have so much fun. Just enjoy it and then when you get on the golf course it’s just normal business.”T

Ricardo Gouveia of hosts Team Portgual can’t wait to play in front of their home crowd.

Gouveai said : “We’ll have a bit of pressure coming up playing in front of home crowds. There’s a mix of short par fours with some tricky par threes. The fifth hole – which is the actual 18th on the course – has always been a tough par four.

“Then you have the last hole which is going to be a lot of fun from what I’ve heard. It’s going to be a different experience to what we’ve had at previous GolfSixes. We’re both fast players so I don’t think we’ll have a problem.”

Pedro Figueiredo, who is playing with Gouveia, said: “I think it’s great. I think it brings another type of public to the game and I think that’s what’s needed – a bit more of a broad spectrum in terms of people who are watching golf and following golf.

“I think this tournament certainly does that. Hopefully the results in that aspect will be very positive.”

Team Spain have not had so far to travel and will feel at home on the Iberian peninsula.

Recent European Tour winner Jorge Campillo said: “I played this two years ago and it was fun, and playing alongside Nacho will be fun as well, so hopefully here in Portugal the weather will be good and it’s quite close to home for us so hopefully we can do well here.

“Anything can happen over six holes and hopefully together we can make a few putts and win a few matches. We have both represented Spain a long time ago and it’s always fun to play for you country. I think we’ve done a good job when we were amateurs and hopefully that can continue now.”

His partner Nacho Elvira said: “I haven’t played this tournament before, Jorge has played it though. I am really excited – we’ve been talking about playing a tournament together for a few years now and now we have the opportunity so it’s great.

“We’ve been playing well this season so far but in six-hole match play anything can happen, that’s the beauty of it but we’re here to play as well as we can and also just have some fun.”

Team Germany’s Esther Henseleit has been shooting the lights out on the Ladies European Tour and started last week’s US Women’s Open very strongly.

The teenage rookie said: “I really like it. Usually it’s only for men and it’s great to get an invitation to play here. It’s my rookie year but I really like it and I’ve done quite well the first few months.

“I think we’ll just try to do our best and I am a little longer so maybe Laura will go first and I go after her, and hopefully we can make a lot of birdies.”

“I still remember how Charley Hull hit her tee shot and the guys just walked off. We’re hoping to do a bit of the same this year. It’s exciting to be here.

“I’ve played in the Jordan Mixed Open and I think that’s been pretty big for us, I think we’re all fighting for the same cause at the moment, I think some of the men are getting into it too.

“They know we can actually play just as good as them, just not quite hitting the same distance.

“I think we had a really nice tournament in Jordan and coming back here and getting to play with the men again, it’s just nice to have those opportunities and we’re trying to do the same as Charley last year.”