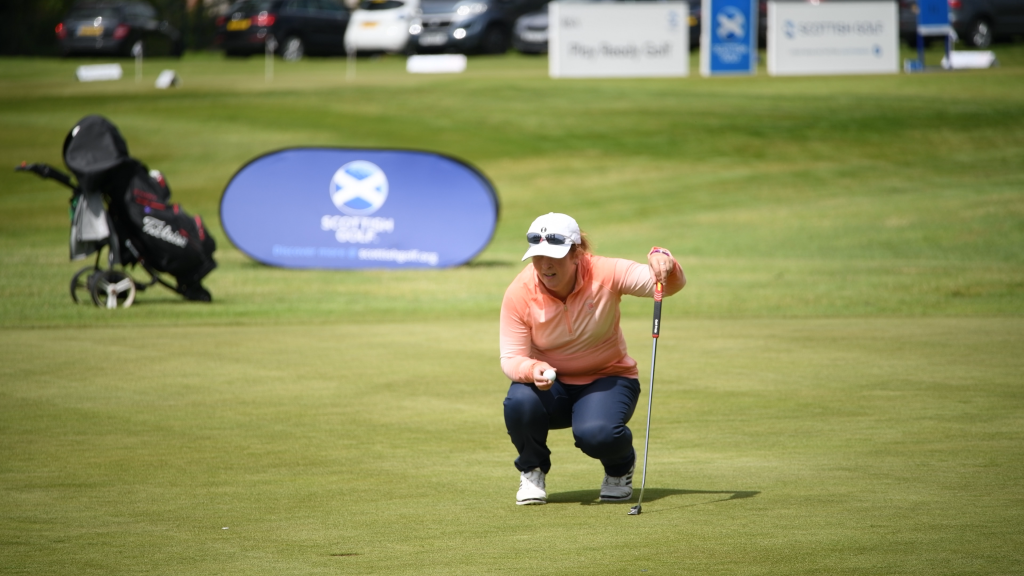 Defending champion Elaine Moffat picked up where she left off on day 1 as she secured the strokeplay title at this year’s Scottish Senior Women’s Open Championship.

A solid round of 76 in reasonable conditions saw her finish +2 overall and record a two-shot victory over Aileen Baker of Crail.

Baker posted the best round of the day, 75, to finish on +4 overall. Despite finishing strongly, playing her last 7 holes in -1, she couldn’t quite close the gap on Moffat and had to settle for a runner-up finish.

“It was a hard game of golf and I was really aware that I needed to stay focussed. There was definitely added pressure starting the day with the lead, but in a good way; it made me stay on my toes. I didn’t play my best, but I made good decisions and I’m pleased to have got through it.

It’s something I’ve not won before so it’s lovely to have that under my belt. I’m going to enjoy the moment. I have to thank my coach Mike Rae who has been key in helping me to achieve this.”

On regrouping for the start of the matchplay tomorrow, Moffat continued, “I’ll go home, get all the gear sorted out and once I’ve done that I’ll just try and rest up and get my brain back in the right mode for another day on the golf course.”

Moffat’s nearest challengers at the start of the day, Sandra Jackson of Royal Dornoch and Alison Davidson of Stirling, fell away on day 2, both shooting +8. Both players will now look to regroup going into the knockout stages.

Last year’s beaten finalist, Sheena Wood, recovered from an opening round of 84 to make the matchplay with a solid second round of 78, keeping her hopes of going one better than last year alive.

The biggest leaderboard climb of the day belonged to Murrayfield’s Caroline Steedman, who bounced back from a first round 85 to shoot 76 today and finish in the top 16, having started the day in a tie for 34th.

The tournament will now move to the knockout stages where the top 16 scratch scores will progress to the matchplay, starting tomorrow morning with the cut falling at +14 after the strokeplay. The top 16 net scores from the rest of the field will also now compete in the net matchplay.