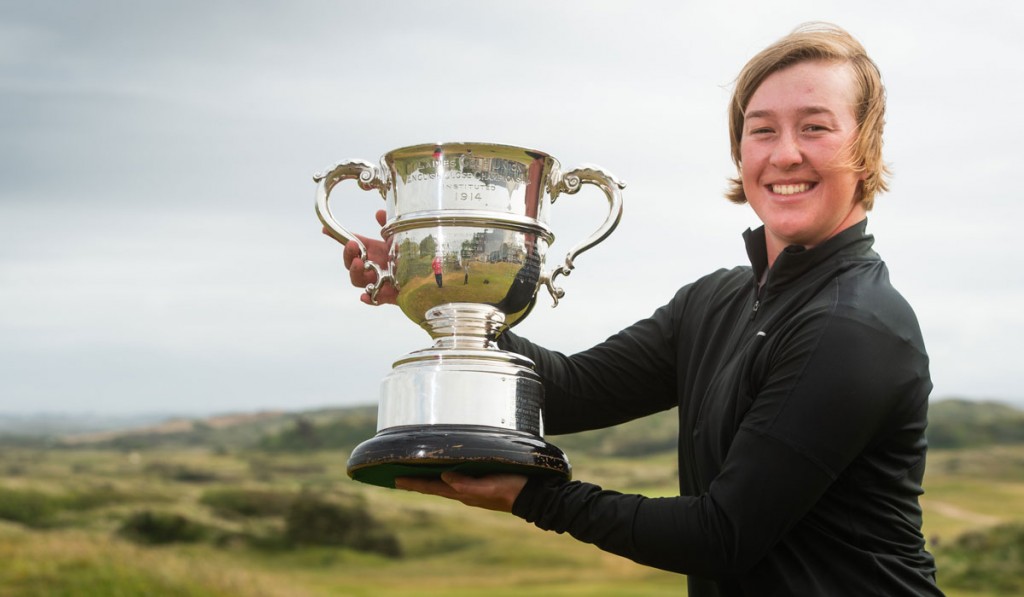 HERTFORDSHIRE’S Ellen Hume is the new English Women’s Amateur Champion, winning a superb final against Essex’s Lily May Humphreys on the 19th hole at wet and windy Saunton Golf Club.

Despite the most testing conditions on the North Devons links, the players produced great golf, with the momentum swinging to and fro over the closing stages.

Humphreys, from Stoke by Nayland GC, birdied the short 16th to get back to all square. Hume immediately birdied the long 17 to go one ahead. Humphreys won 18 with a par three to take the game down the 19th.

It was there that Hume claimed the title with a steady par, after Humphreys’ approach found a thick clump of rough just off the green.

“It’s the toughest match I’ve ever played,” said 19-year-old Hume, from Mill Green Golf Club. “I know that Lily is a great player and I felt I was the underdog going into the match, definitely.

“It’s unbelievable, I never expected to win, especially with the opponents I’ve had. The odds weren’t in my favour!”

Humphreys, the top seed, was going for her third big title of the month, having already won the Irish and Welsh stroke play championships. But Hume’s confidence was high.

She’s returned from her first year at university in the USA with her game in great shape and underlined that earlier this month when she won the Hertfordshire championship.

Earlier this week she had already claimed a series of notable scalps, including those of defending champion Georgina Blackman and Emily Toy, another England international from Cornwall’s Carlyon GC.

In this morning’s semi-finals she showed her fighting qualities after going four down to Trentham’s Emily Brennan after five holes. Hume began her rally on the eighth and steadily pegged back the deficit until she won 3&1.

In the final she went straight on to the front foot by winning the first hole with a par, which she felt was key to her success. “It was crucial to settle any nerves,” added Hume.

She was never behind in the game, although Humphreys pulled her back to all square on three occasions.

“Matchplay is a format I like,” said Hume. “My game was in a good place after my year at college in America and winning the county championship – in exactly the same format – helped prepare me for this.”

Humphreys – the winner in 2016 at Lindrick – reached the final by beating Gosford Ladies’ Jess Baker 7&6 in a one-sided semi-final, but was unable to make it a hat-trick of wins for Essex, following the win by Georgina Blackman (Chelmsford) at The Wilmslow, 12 months ago.

She is the first Hertfordshire player to win the title since Charlie Douglass back 10 years ago after her victory at Lindrick. In total, nine players have won the trophy twice – Humphreys was bidding to join the likes of Emily Bronte, who recorded her first victory on the LPGA on Sunday, just four years after completing back to back English Women’s victories at Hunstanton in 2015.

Law, who hails from Stockport, claimed her first English Women’s title  a year earlier at St Enodoc, in Cornwall. The last back to back winner before Law was Suffolk’s Julie Hall (nee Wade), who took the trophy in 1994 and 1995 to go with her first victory in 1988.

Wade, who became Julie Otto when she married the R&A’s director of research and testing, Dr Steve Otto, and turned pro in 2012, playing on the LET Access Tour, at the age of 44.