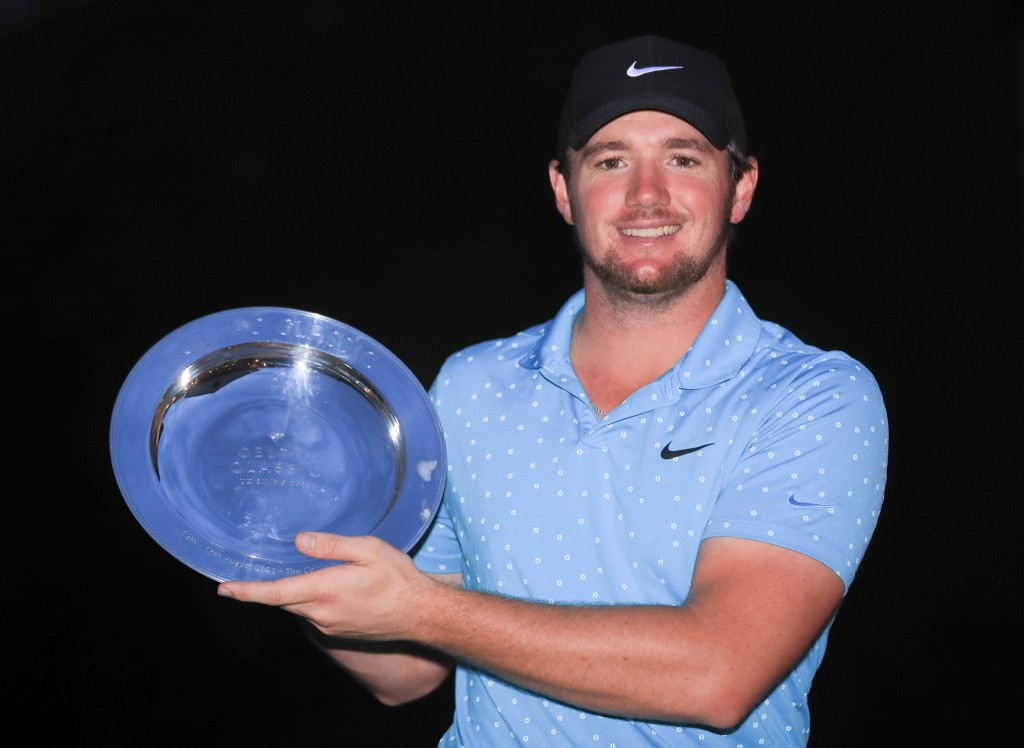 The Tour’s Manchester-born star who grew up in Florida became the first player to win, miss a cut, and then win again in the space of three weeks at three different tournaments.

A delighted Horsfield said: “It was pretty crazy. My goal this weekend was to have no bogeys and I was able to do that.

“I made a huge putt on 17 to keep that alive. I just played solid all week, really. To have a nice cushion coming into the last was nice.

“I never really felt nervous or felt uncomfortable, maybe because I was in this situation a few weeks ago.

“On 15, we decided to lay-up and I could have gone for that green. It’s the perfect three-wood number but there is so much trouble around that green.

“The birdie on 14 was huge because it gave me that option. If you’re one ahead, I think you go for that.

“But making that putt on 14 and then giving myself a pretty easy decision on the tee.

“Then I just sort of brought it home,” added Horsefield, who was certainly more composed speaking after his win then he had been two weeks earlier when winning the Hero Open at the Forest of Arden.

Horsfield had fired a superb 64 in Friday’s second round to close the gap on the leaders before Syme’s spectacular 63 on Saturday gave him the overnight lead. 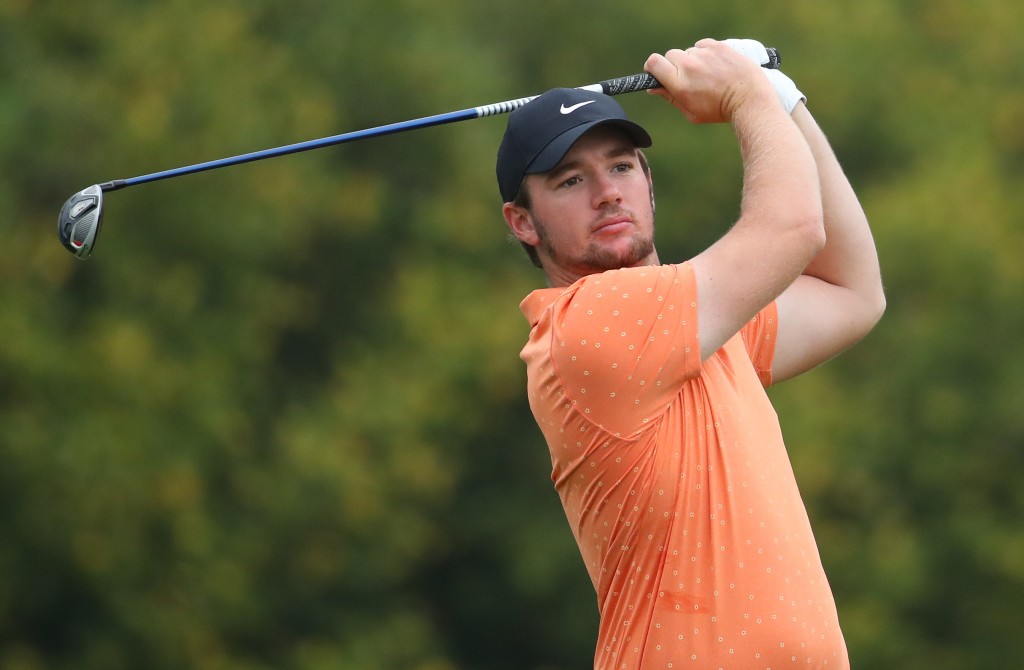 THE 23-year-old started the day one stroke behind young Scot Connor Syme.

But they were level after the 2017 Walker Cup player dropped a shot at the first at Celtic Manor’s Twenty Ten Course.

Horsfield – tipped for the top by Ian Poulter some seven years ago – made consecutive birdies on the third and fourth.

Sam then birdied the seventh. But the players then had a two-hour delay as lightning closed in at the home of the 2010 Ryder Cup.

After the restart Horsfield parred the next six holes before his fourth birdie of the day on 14th.

And he parred his way home to sign for a bogey-free 67 and an 18-under par total.

Horsfield moves to the top of the UK Swing Order of Merit, securing a place at next month’s US Open.

He will be joined by the other top 10 players on the UK Swing Rankings at Winged Foot at the conclusion of next week’s ISPS Handa Wales Open.

Horsfield is also guaranteed a share of £250,000 as part of the European Tour’s Good for Golf initiative.

The top 10 on the rankings after the ISPS Handa UK Championship at The Belfry in two weeks’, will share the money to donate to charities of their choice. 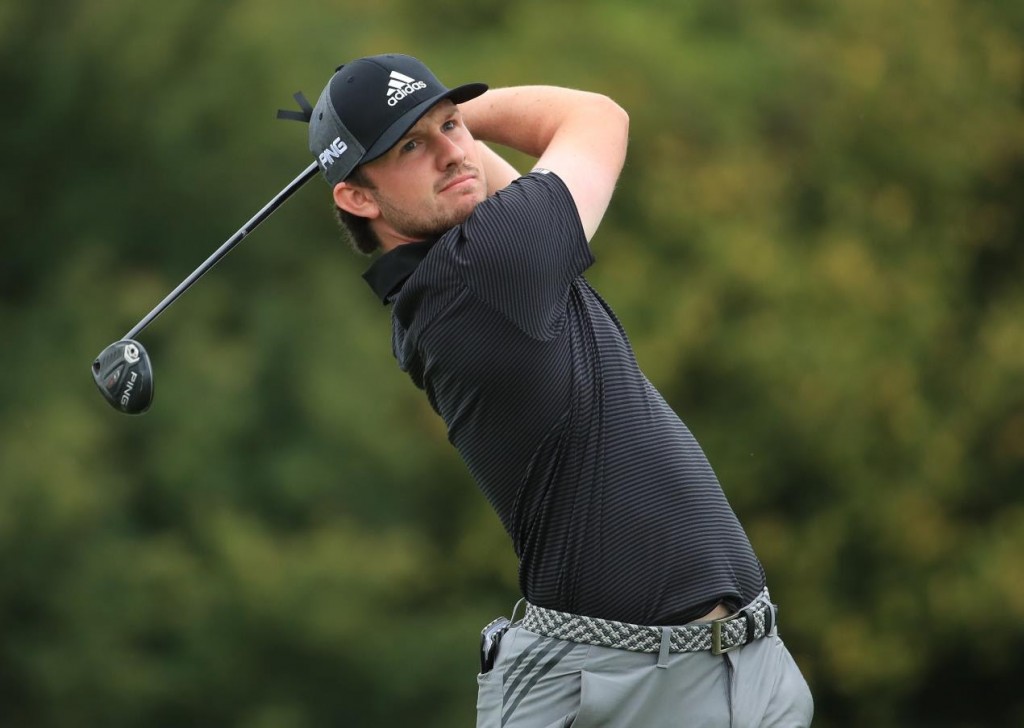 JUST as at the Hero Open, Belgium’s Thomas Detry finished runner-up to Horsfield – having also posted a four-under par, bogey-free round.

It was Pieters first start since the resumption of the 2020 Race to Dubai.

Syme, who played in the Walker Cup against the likes of Cameron Champ, Scottie Scheffler and USPGA Champion Collin Morikawa, said: “It was another good result.

“I’ll have a couple of days away and play next week. My goal is to get in that top 10 for the US Open.

“It’s given me a step towards that. It’ll hurt for a couple of days, but it’s a good week.

“If someone offers you third at the start of the week, no matter the circumstances, you’ll take it.

“I’ll build on that and hopefully have a good week next week on the same course,” said the 2016 Australian Amateur Champion.

The 25-year-old from Kircaldy finished 14th on the Road to Mallorca Order of Merit to earn his full card.

Pieters who recently became a father, said: “It’s always a bit testing with your caddie, getting the numbers right.

“We did an okay job this week. It’s nice to start after five months off with a top 10. We had a bit of a slip up yesterday but still, happy overall.

“My caddie said if I go two-under through the last four then he’ll buy me dinner tonight. So I get free dinner.

“At the beginning of the day when it was a bit warmer, my grips were still slippery. I had a lot of trouble this week, I don’t know why.

“I’ve never really had that much trouble with it. After the restart helped me because it was colder and I could grip it and I felt a lot more at ease.

“I hit a lot better golf shots,” said Pieters, who has four European Tour wins under his belt, having won the NCAA US college title in 2012.

•For full results in the Celtic Championship, click here.