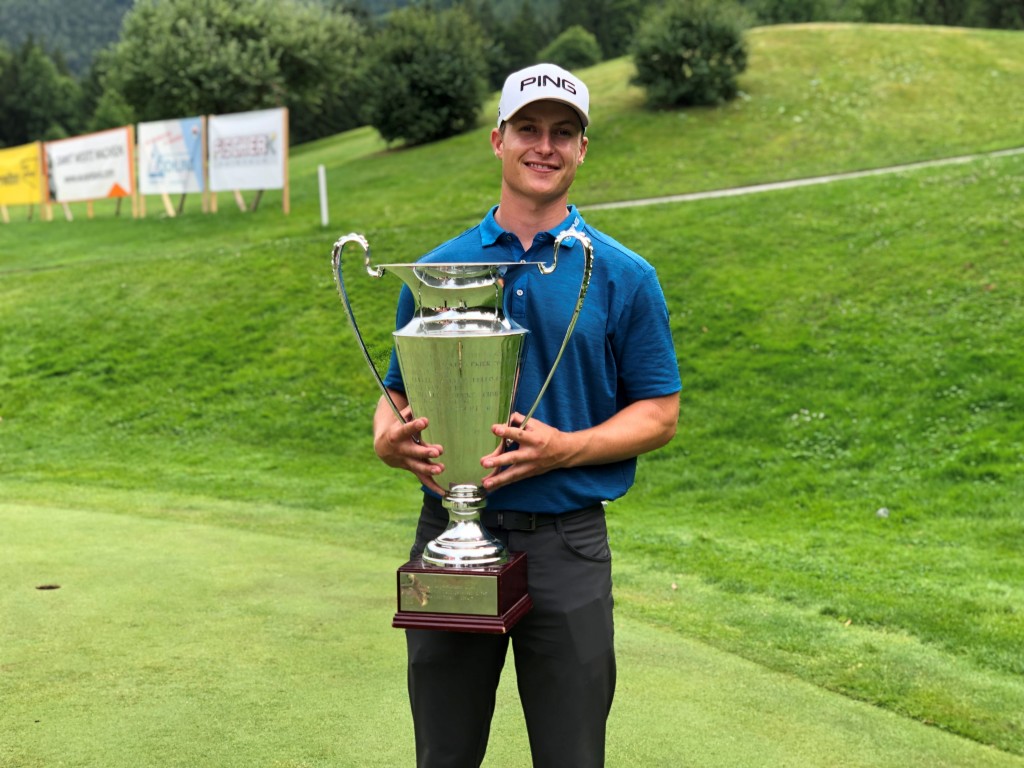 CALUM Hill carded just three bogeys in 72 holes to win the Euram Bank Open, his second European Challenge Tour title, at Golf Club Adamstal and jump into the top 15 on the Order of Merit.

The Scot added a bogey-free 66, four under par, to his opening rounds of 65-64-67 to reach 18-under par and win by four shots ahead of countryman Ewen Ferguson and Portugal’s José -Filipe Lima, who both finished on 14 under par following final rounds of 64 and 65, respectively.

Prior to this week, Hill had endured a mixed season with two top 10s and three missed cuts from eight starts.

However, a tie for 26th place at the Aberdeen Standard Investments Scottish Open last week offered glimpses of a return to the type of form which saw him win in only his fifth Challenge Tour start last year, and with his tremendous performance in Austria, he has showed he is truly back to his best.

Hill, a member at Craigie Hall, said, “I’ve been saying it my coach, management team and parents that I’ve felt like my game was in a nice position, but I haven’t been managing it particularly well.

“I wasn’t missing in the correct spot if I was missing or my short game wasn’t tight enough to get up and down all the time, so I was making quite a few errors that were a little uncharacteristic, so my scoring was quite poor.

“There were little glimpses of it coming together with a few low scores, but I’ve tightened it up in the last couple of weeks and I’m scoring a lot better.

“I’m very happy with how the day and the week has gone. It’s fantastic to get another win and not only secure next year but it will hopefully push me forward to finishing in the top 15.”

The 24-year-old, who won the Galgorm Resort & Spa Northern Ireland Open, entered the final round with a three-shot lead from Kent’s Matt Ford in second place.

However that advantage had disappeared by the time the duo reached the fifth tee box following a quick start by the Englishman, but the leaderboard getting tighter only heightened Hill’s focus.

“In my mind, I thought if I got to 20-under, I should win on that number, but three holes in, I was tied,” Hill said.

“Matt had a really good start and we were all square through four holes, so it tightened it up a little and made it more interesting. I had to focus and minimise the errors and make a few birdies along the way to try and give myself a chance.

“I was hitting really nice golf shots, but my putts just weren’t dropping. They weren’t great rolls but I think I eased into my putting a little slower than I eased into my long game.

“I wasn’t worried about not keeping up with Matt because I felt like I could keep plotting away and make fewer errors.

“I figured that if I could get to three or four-under, then he would have to get to eight-under and you’ve got to play great golf to get that deep.”

Ferguson flew up the leaderboard on day four to secure his best Challenge Tour finish of tied second with Lima, both of whom kept the bogeys off the card and in doing so finished one shot clear of Ford, Grégory Havret, Rikard Karlberg and Oliver Lindell – who all shared fourth place on 13-under.

Frenchman Ugo Coussaud and Poland’s Adrian Meronk completed the top 10 having finished on 12-under, with both men carding four-under par rounds of 66.

Meanwhile, two-time European Tour winner Julien Quesne set a new course record at Golf Club Adamstal after signing for a superb nine-under par round of 61, beating the previous record by one.

With his win, Hill jumps to sixth place in the Challenge Tour Rankings while Ferguson’s second place moves him onto the cusp of the top 15, in 17th spot.

After a week’s break in the international schedule, the Challenge Tour will travel to Finland for the Vierumäki Finnish Challenge, from August 1-4.